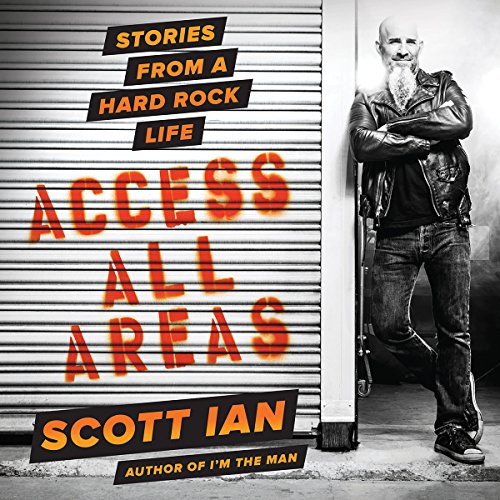 Access All Areas: Stories from a Hard Rock Life

Scott Ian (Author, Narrator), Hachette Audio (Publisher)
4.4 out of 5 stars 235 ratings
See all formats and editions
Sorry, there was a problem loading this page. Try again.

Entertaining, crazy, and hilarious stories from Scott Ian of Anthrax

Scott Ian, famous for cofounding legendary thrash metal band Anthrax and only slightly less so for his iconic beard, has done and seen a lot in his decades of touring. Those of you who have heard Scott's memoir I'm the Man may know the history of the band, but Access All Areas divulges all the zany, bizarre, funny, and captivating tales of what went on when the band wasn't busy crafting chart-topping albums.

In his more than 30 years immersed in the hard rock scene, Scott has witnessed haunting acts of depravity backstage, punched a legendary musician, been a bouncer at an exclusive night club, guest-starred with Anthrax on Married with Children, invaded a fellow rock star's home, played poker professionally, gone on a non-date with a certain material girl, appeared on The Walking Dead, and much more.

Access All Areas allows its listeners to do just that. With humor, candor, hindsight, and writing chops that would make Stephen King jealous (nope, not even on Bizarro world), Scott Ian takes his fans along for the ride at all the parties, hot spots, and behind-the-scenes shenanigans they will never hear about from anyone else. And none of it would have happened without a bit of divine inspiration from KISS. (No, seriously. Listen to chapter two.) Best of all, Scott seemingly lacks the ability to be embarrassed, making Access All Areas howlingly funny, self-deprecating, and every bit as brash and brazen as one would expect from one of the original architects of speed metal.

PLEASE NOTE: When you purchase this title, the accompanying reference material will be available in your Library section along with the audio.

Switch between reading the Kindle book & listening to the Audible narration with Whispersync for Voice.
Get the Audible audiobook for the reduced price of $4.99 after you buy the Kindle book.
Learn more about membership
By completing your purchase, you agree to Audible’s Conditions Of Use and Privacy Notice.
Sold and delivered by Audible, an Amazon company

4.4 out of 5 stars
4.4 out of 5
235 global ratings
How are ratings calculated?
To calculate the overall star rating and percentage breakdown by star, we don’t use a simple average. Instead, our system considers things like how recent a review is and if the reviewer bought the item on Amazon. It also analyses reviews to verify trustworthiness.

Father tyme
2.0 out of 5 stars Not as good as the reviews suggested.
Reviewed in the United Kingdom on 30 September 2018
Verified Purchase
I had high hopes for this book, despite not being an Anthrax fan, having read a couple of great reviews. Sadly I didn't manage to get half way before losing interest, as most of the stories are pretty dry and particularly interesting. Pity.
Read more
4 people found this helpful
Report abuse

Amazon Customer
5.0 out of 5 stars On man!!
Reviewed in the United Kingdom on 1 June 2022
Verified Purchase
When you read a book in someones voice, intonations and all, side splitting funny, in-depth look at the life of a rock star (and personal hero)
Blast of a read!!!
Read more
Report abuse

Chris Ward
5.0 out of 5 stars Great read!
Reviewed in the United Kingdom on 27 October 2021
Verified Purchase
After being thoroughly entertained by Scott's first book I had to read this one, once again an awesome read, it reads a little easier than the first and by the time you're at the final page you feel that you know Scott. Hope he has more stories to tell!
Read more
Report abuse

Causbrite
5.0 out of 5 stars Worth it just for the Dimebag story
Reviewed in the United Kingdom on 16 May 2020
Verified Purchase
Had me laughing away to myself. Honestly the Dime story alone would be worth the purchase. Then, there's the Lemmy one. Classic.
Read more
Report abuse

Steve Hunter
5.0 out of 5 stars Great book
Reviewed in the United Kingdom on 14 December 2018
Verified Purchase
Great read, totally different from I'm the man. Thoroughly enjoyed it, roll on the next tour. Here's to Dime 🤘🤘
Read more
Report abuse
See all reviews