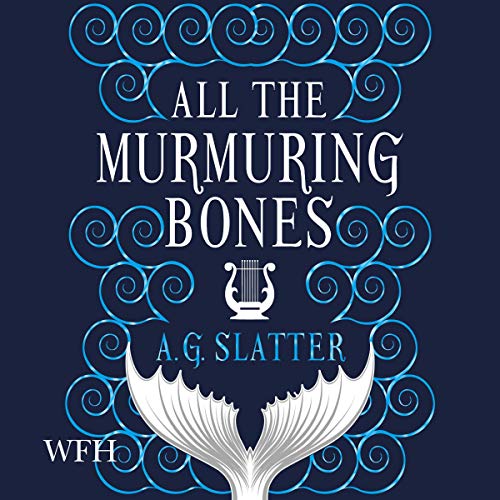 All the Murmuring Bones

Orphaned as a young child, Mirin O'Malley has been brought up by her grandparents on their isolated, rambling estate Hob's Hallow. Long ago her family prospered due to a deal struck with the mer, the terrifying creatures who live in the depths of the sea: safety for their merchant ships in return for a child of each generation. But for many years the family have been unable to keep their side of the bargain and their fortunes have suffered as a result. When Mirin's grandfather dies, her grandmother puts in train a plan to restore their glory - but at the price of Mirin's freedom. Finding amongst her grandfather's papers evidence that her parents may still be alive, Mirin is determined to escape and discover the truth about her origins. This takes her on a treacherous journey to Blackwater, the estate her parents built when they fled Hob's Hallow, but on arrival Mirin finds the estate in decline and her 'Uncle Edward' in charge: where are her parents, and who is this Edward Elliott really?

A story of mystery and magic and the strange creatures that lurk beneath the waves.

Switch between reading the Kindle book & listening to the Audible narration with Whispersync for Voice.
Get the Audible audiobook for the reduced price of $3.49 after you buy the Kindle book.
Learn more about membership
By completing your purchase, you agree to Audible’s Conditions Of Use and Privacy Notice.
Sold and delivered by Audible, an Amazon company

4.4 out of 5 stars
4.4 out of 5
1,342 global ratings
How are ratings calculated?
To calculate the overall star rating and percentage breakdown by star, we don’t use a simple average. Instead, our system considers things like how recent a review is and if the reviewer bought the item on Amazon. It also analyses reviews to verify trustworthiness.

Morgana MacLeod
5.0 out of 5 stars A magnificent merge of mythos and magic
Reviewed in Australia on 19 April 2021
Verified Purchase
As beguiling as sirens' song, 'All The Murmuring Bones' by A. G. Slatter is a rich tapestry of fairytale and myth. With her trademark crystalline prose, Slatter draws us into Merin's quest, illumed by tales inside the tale that do as much as the finely-drawn characters and evocative settings to enthral the reader. One of those rare books that you find impossible to put down, but also ration so they don't end too soon. Netflix need to option this stat!
Read more
Helpful
Report abuse

Karen B
5.0 out of 5 stars Haunting tale of dark beauty
Reviewed in Australia on 18 April 2021
Verified Purchase
The O'Malley's have ruled both Hob's Hallow the seas as far back as memories go. Powerful, fortunate and feared, as their hold on land and the deep declines, it's left to the last daughter of the blood to ensure their 'reign' continues. But Merin is not your usual kind of O'Malley. Headstrong, smart and determined to carve her own path, when her grandmother strikes a bargain to guarantee the family's future, Merin, her mother's daughter in every way, determines to make her own. But the consequences for breaking tradition are far greater than anyone ever realized... especially, Merin. This such an atmospheric, moody story of kinship, loss, dark deeds, and the bonds that time and myth have tightened to breaking point. Angela Slatter's prose is lustrous and rich, plunging you into this Gaelic world where monsters dream and dare to cross the threshold into the human realm. A haunting tale that with each page weaves a special kind of magic. Stunning.
Read more
Helpful
Report abuse

Lynette Aspey
5.0 out of 5 stars Prepare to be ensorcelled
Reviewed in Australia on 16 April 2021
Verified Purchase
Great story, exquisite writing and seamless worldbuilding. This book will make you greedy for more - more tales, deeper histories and magical wordcraft. Lucky for us, this author is another book coming out in 2022.
Read more
Helpful
Report abuse

Meike
5.0 out of 5 stars More horror than I expected!
Reviewed in Australia on 16 May 2021
Verified Purchase
Spectres and ghosts, zombie-like creatures. The core story is wonderful and unravels naturally but expect a few thrills on the way. The mystery of the O’Malleys is at the heart of the book and it won’t disappoint!
Read more
Helpful
Report abuse

Jennifer
5.0 out of 5 stars Best book in a while ….
Reviewed in Australia on 17 July 2021
Verified Purchase
Beautifully written, for lovers of fantasy and storytellers who are passionate about the art.
Sincerely enjoyed. True to the original design of folk stories. Loved it!
Read more
Helpful
Report abuse
See all reviews

V. O'Regan
5.0 out of 5 stars A beautifully wrought Gothic fantasy that draws on Irish folklore.
Reviewed in the United Kingdom on 8 April 2021
Verified Purchase
‘One for the house, one for the Church and one for the sea.’

‘All the Murmuring Bones’ by A.G. Slatter was simply amazing. I love stories that feature sea lore and mer-folk, so I was very drawn to this novel from my first sight of its stunning cover.

I did a combined read/listen for an immersive experience. The unabridged audiobook is narrated by Aoife McMahon.

The novel’s lead and narrator is Miren O'Malley. Many years previously the O’Malley family had entered into a pact with the mer-folk: in return for the safety of their family’s ships in every generation they would give a child to the sea. Yet for years the family has been unable to fulfil their side of the bargain with the result that their fortunes have declined.

Now Miren's grandmother is determined to restore the family to its former glory and so is manipulating her into marrying a wealthy distant cousin. Thus, when Miren has children, one will be given as tribute to the sea-queen. Yet Miren is determined to create her own destiny.

Slatter has crafted a truly wonderful Gothic fantasy with dark family secrets, witches and magic, and plenty of mythic creatures including those associated with the sea. It is a tale of strong women and also of the men who inevitably seek to control them.

Woven into the main narrative are a number of fantastic tales that are taken from Angela Slatter’s previous collections. In her Author’s Notes she writes: “I wanted to have a world where the tales I’ve told readers in the past are ones that these characters also grew up with.”

In addition, Slatter has created very vivid settings, including Hobb’s Hallow, the O’Malley’s ancestral home, and the mysterious Blackwater estate. These details were very finely drawn bringing an authenticity to her world building.

Aoife McMahon’s voice is beautiful and melodic and I felt that it complimented the storytelling style of the novel and brought Miren O’Malley and her world vividly to life.

I adored this book and it is one of the best fantasies that I have read in some time. I was very pleased to read that Slatter is writing another novel set in the same world for publication in 2022. I also will be investigating her back catalogue of novels and stories.

Fat Enid Coleslaw
5.0 out of 5 stars Mythical gothic horror with the best female lead I've ever read
Reviewed in the United Kingdom on 30 September 2021
Verified Purchase
I couldn't put this down. Honestly, Miren has fast become one of my favourite characters in fiction ever - despite everything she uses her wits and wiles and pushes through adversity to grow up and out and bloom amongst the darkness she was brought up in. This book has everything - a family mystery, clues scattered through the books that aren't immediately obvious, mythical creatures, horror, ghosts, familiar fairy tales with a gruesome twist, and some wonderful comeuppance on the people who did her wrong. Miren is imperfect - she's sly, she's slow to trust, she doesn't always know the right thing to say or do and she's ruthless - but it's made me love her all the more and cheer for her every step of the way. Genuinely one of the best books I've ever read, and I dont leave reviews often but I had to as soon as I finished this!
Read more
One person found this helpful
Report abuse

Miss Fox
3.0 out of 5 stars Good points and bad points
Reviewed in the United Kingdom on 19 August 2021
Verified Purchase
First of all- the physical copy of the book I was sent was unfortunately faulty and/or poorly glued; while I was reading this on holiday about 20 of the pages literally blew away! Luckily I'd already read those ones. Amazon did refund me - so no problem there.

As for the story; it was a pretty slow waffley start and I wasn't sure where it was going at first. It started to get very interesting after the first couple of chapters and was great until about 2 thirds in when it then started to feel like the ending was rushed and I was a bit disappointed at the ending.

On a positive it is well written and the heroin Miren is a very likeable character with an engaging narrative. I loved the folklore references and the gothic connotations (though some of the gothic content was a bit unnecessary to the tone of the story and it felt like two books in one).

I would say it's worth a read but I wouldn't read it again.
Read more
Report abuse

Emily-Rose Hale
5.0 out of 5 stars Absolutely LOVED this book!
Reviewed in the United Kingdom on 11 June 2022
Verified Purchase
I just finished this book today and I absolutely adored it! I usually stick to horrors, this had some fantasy mixed in which I thought I wouldn’t like but it was done so well I actually really enjoyed it! I am going to look into one of her books of short stories called ‘Sourdough and Other Stories’ as it mentions a couple of the details in this book are apparently based on some of the stories in there! I also see there’s another Gothic Fantasy she’s due to release this year (or has already, I’ve not had chance to go look for it yet!). I would 100% recommend this book though if you like gothic tales, horror and fantasy! I’ll be recommending it to my friends for sure! 😍
Read more

5.0 out of 5 stars Absolutely LOVED this book!
Reviewed in the United Kingdom on 11 June 2022
I just finished this book today and I absolutely adored it! I usually stick to horrors, this had some fantasy mixed in which I thought I wouldn’t like but it was done so well I actually really enjoyed it! I am going to look into one of her books of short stories called ‘Sourdough and Other Stories’ as it mentions a couple of the details in this book are apparently based on some of the stories in there! I also see there’s another Gothic Fantasy she’s due to release this year (or has already, I’ve not had chance to go look for it yet!). I would 100% recommend this book though if you like gothic tales, horror and fantasy! I’ll be recommending it to my friends for sure! 😍
Images in this review

Fairyness
5.0 out of 5 stars Captivating
Reviewed in the United Kingdom on 30 January 2022
Verified Purchase
I read this in one sitting. I couldn't put it down. I was totally submerged in the story and it has just enough suspense to keep you wanting more. Even though it is gothic fantasy , the fantasy aspect isn't over done and the folk tales are a great addition. It proves it only takes 1 family member to break the cycle of trauma and secrets.
Read more
Report abuse
See all reviews