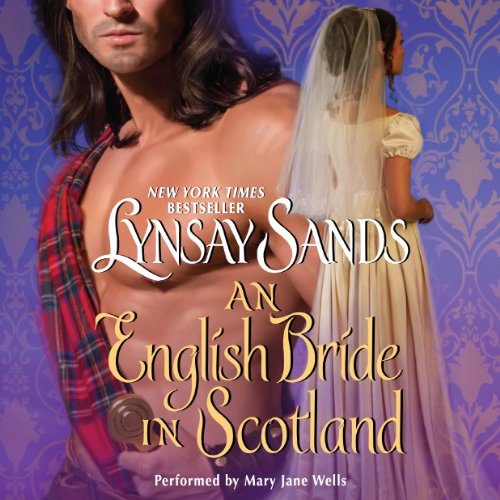 An English Bride in Scotland

4.5 out of 5 stars
4.5 out of 5
944 global ratings
How are ratings calculated?
To calculate the overall star rating and percentage breakdown by star, we don’t use a simple average. Instead, our system considers things like how recent a review is and if the reviewer bought the item on Amazon. It also analyses reviews to verify trustworthiness.

Romancebookjunkie
3.0 out of 5 stars Light hearted medieval romance
Reviewed in Australia on 18 June 2019
Verified Purchase
Light hearted medieval romances- do they exist? Well apparently they do because this one was light hearted and funny and sweet. This was a case of bookstagram made me do it after seeing a couple of reviews for this one and although I didn’t love it I liked it but it was still a bit meh at the same time.
.
Our heroine has been raised to be a nun since she was deposited in a nunnery at the age of 7 until one day when her mother drags her out. She is then quickly married off to a Scottish Laird in replacement of her sister who ran off with the stable boy (natch).
.
I thought the heroine’s naivety would annoy me but instead it was kind of adorable? As was the way that the hero doted on her and pretty much just had love hearts in his eyes every time he looked at her. Overall not a bad medieval romance but I kind of just wanted more 🤷🏻‍♀️.
Read more
Helpful
Report abuse

lisa
TOP 100 REVIEWER
5.0 out of 5 stars Head injuries in the highlands
Reviewed in Australia on 8 December 2015
Verified Purchase
I did enjoy this book but it has so many convenient head injuries I lost count. The most likeable element is the heroine Annabelle who is foisted off on laird Ross in place of his betrothed. Annabelle is a morning person with a sunny personality despite being bought up by mean nuns and parents who like to make her feel inadequate.

Annabelle has lived at a convent since 7 years old in training to become a nun, something her parents want to hide as she is not trained in wife duties. Her new husband Ross dreads marrying his unknown bride but changes his mind once he sees her. There are mysterious attacks on the couple as they travel to Ross's home. Along the way there are fun times as Annabelle tries to comply with church teachings that forbid sex on most days of the week. Despite all the head injuries this is a light hearted book and recommended reading.
Read more
Helpful
Report abuse

Book hoarder
5.0 out of 5 stars A sweet highland romance
Reviewed in Australia on 1 March 2021
Verified Purchase
In the past I've often found Lynsay Sands books bordered on the ridiculous - but not this one. I loved it. It was more sweet - Annabelle was just such a sweet character and Ross was so protective of her. I was pleasantly surprised by how much I enjoyed this book. I would definitely recommend it to anyone who likes a bit of humor in their historical romance story...and who doesn't love a sexy highlander?
Read more
Helpful
Report abuse

Cyndi From Cairns Australia .
5.0 out of 5 stars Enjoyed this story thoroughly
Reviewed in Australia on 27 April 2021
Verified Purchase
Highly recommended for a good read. Lots of twists and turns.
With a happily ever after ending.
Thanks heaps. ....
Read more
Helpful
Report abuse

Voracious
2.0 out of 5 stars Mmeehhhh
Reviewed in the United Kingdom on 20 February 2020
Verified Purchase
The book starts out being interesting then proceeds to drone on for twice the length of pages needed to tell the whole story. *Spoiler alert*

Annabel is dragged from an Abbey to marry Ross who carts her off summarily to his keep and they proceed to fall straightforwardly in love. There was no spicy angle to that aspect whatsover.

Then there is intrigue of some man attacking Annabel and then her sister showing up to enact an unrealistic rendition of diva meets drama queen. Everything thereafter felt a bit beyond believable for me. The whole bit about getting Annabel into the chest....unfathomable how she agreed given all said and done when she could just as easily sent a messenger to the merchant...

The closing was jarring with what happened to Grant. Seemed contrived to get a rise out of the reader but left me feeling like saying, 'Realllllly? Come on!'

Not sure I'll keep up with this author.
Read more
2 people found this helpful
Report abuse

Kindle Customer
3.0 out of 5 stars Fun Highland Romp
Reviewed in the United Kingdom on 2 November 2019
Verified Purchase
I enjoyed the story of Annabel and Ross, they were a well matched couple. The plot kept me guessing and I didn't guess the identity of the would-be kidnapper.
My only gripe with this story was the constant references to Annabel's curves. I like it when author's present a non-stereotypical heroine, however the constant references to her size/ shape got a little old after a while...
Read more
One person found this helpful
Report abuse

B. Richards
4.0 out of 5 stars Loved (nearly) everything about this!
Reviewed in the United Kingdom on 3 August 2013
Verified Purchase
I did really enjoy this new offering from Ms. Sands and I'm eager for the next in the series.

Annabel is everything you could want in a heroine - brave, naive, innocent, irrepressible, strong. She is thown into a nunnery age 7, her parents paying half the price of what her dowry would have been if they had managed to marry her off in the future. She was unnecessary to them as they had her beautiful, older sister Kate to make a strong union. 12 long years later, Annabel is surprised when her mother appears at the abbey and whisks her away to save them all. Before the end of the day she is married to a huge, ruggedly handsome Scotsman. Ross McKay is taken with his bride as soon as he sets eyes on her and is eager to whisk her away from her uncaring family. He watches as Annabel beguiles not only him but his strong sentries and all those in his keep. So who is trying to do them harm? How can be control his feelings for her (especially on days when 'bedding' is banned by the church) and keep her safe when she is trying to be the lady he deserves?

It's a fun story that bounds along at a good rate without you feeling like it's being rushed. Its not straight forward enough to be boring but also not especially complicated. I'm sure as like me, most of you will quickly figure out who is behind the attacks on Annabel and her scrummy husband but it's still interesting to read it play out. A problem for me was the maths. If you count the ages and the years, they don't tally together. Details like that really bother me. The other main problem was the price; bit steep if you ask me, especially considering the quality of some of the books you can get for the kindle for free. If you don't like your romances with bed scenes and you haven't read a book by this author before, you should stick clear of Ms. Sands although for the rest of you they are better written than most and do actually have a place in the story. A good read all the same, if price and accuracy doesn't put you off, you probably will enjoy it
Read more
3 people found this helpful
Report abuse

Asteria
5.0 out of 5 stars Beautiful story
Reviewed in the United Kingdom on 19 March 2014
Verified Purchase
This is the tale of Annabel and Ross. She is living in an abbey, when her parents suddenly call for her to marry Ross. He was supposed to marry her sister, but Annabel has to take her place instead.

I really loved this historical story. I have read many romances and plots can often be guessed ahead yet here I was genuinely enthralled and taken up with the developing story. In a rare pleasure, I was able to enjoy the journey the characters took without guessing ahead as to what happened.

The characters are fleshed out beautifully. Initially I was wary of this being a superficial mass romance tale full of cliches, but it is not. Ross is an alpha male with beta traits that make you want to hold him close and lick him all over ( or is that just me? ;) Annabel is a wonderfully sweet heroine who has to adjust rapidly to many significant changes in her life in just a brief time. I was cheering along inside when she stood up and let her temper show ( like a lady though!)

There were some wonderfully colorful secondary characters too, adding to the drama. This is a new author for me, but one I plan on reading more of, given the strengths of this book. Thank you for a great read, Lynsay Sands!
Read more
One person found this helpful
Report abuse

Kindle Customer
4.0 out of 5 stars 4.5Stars
Reviewed in the United Kingdom on 8 January 2017
Verified Purchase
I have read some very mixed reviews about this one but as always i like to make my own mind up. I have read books by this author before and i enjoy her writing style. The basics of the story might not be new or ground breaking but it is a well written historical romance with likable and engaging characters , I loved annabel and ross. I found the book very easy to read and finished it the a day.
Read more
One person found this helpful
Report abuse
See all reviews
Back to top
Get to Know Us
Make Money with Us
Let Us Help You
And don't forget:
© 1996-2021, Amazon.com, Inc. or its affiliates