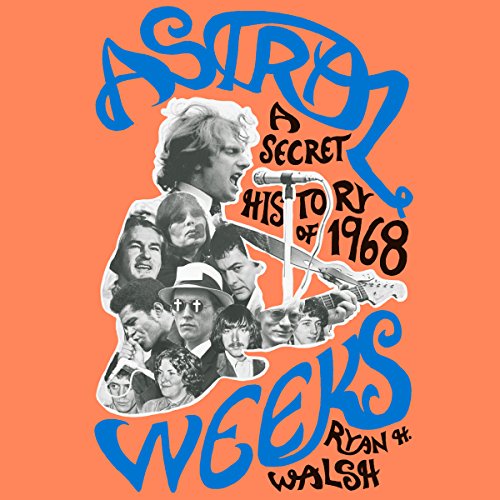 Astral Weeks: A Secret History of 1968

A mind-expanding dive into a lost chapter of 1968, featuring the famous and forgotten: Van Morrison, folkie-turned-cult-leader Mel Lyman, Timothy Leary, James Brown, and many more.

Van Morrison's Astral Weeks is an iconic rock album shrouded in legend, a masterpiece that has touched generations of listeners and influenced everyone from Bruce Springsteen to Martin Scorsese. In his first book, acclaimed musician and journalist Ryan H. Walsh unearths the album's fascinating backstory - along with the untold secrets of the time and place that birthed it: Boston 1968.

On the 50th anniversary of that tumultuous year, Walsh's book follows a crisscrossing cast of musicians and visionaries, artists, and hippie entrepreneurs, from a young Tufts English professor who walks into a job as a host for TV's wildest show (one episode required two sets, each tuned to a different channel) to the mystically inclined owner of radio station WBCN, who believed he was the reincarnation of a scientist from Atlantis. Most penetratingly powerful of all is Mel Lyman, the folk-music star who decided he was God, then controlled the lives of his many followers via acid, astrology, and an underground newspaper called Avatar.

A mesmerizing group of boldface names pops to life in Astral Weeks: James Brown quells tensions the night after Martin Luther King, Jr., is assassinated; the real-life crimes of the Boston Strangler come to the movie screen via Tony Curtis; Howard Zinn testifies for Avatar in the courtroom. From life-changing concerts and chilling crimes, to acid experiments and film shoots, Astral Weeks is the secret, wild history of a unique time and place.

Read more
©2018 Ryan H. Walsh (P)2018 Penguin Audio
Previous page
Next page
Learn more about membership
By completing your purchase, you agree to Audible’s Conditions Of Use and Privacy Notice.
Sold and delivered by Audible, an Amazon company

4.2 out of 5 stars
4.2 out of 5
189 global ratings
How are ratings calculated?
To calculate the overall star rating and percentage breakdown by star, we don’t use a simple average. Instead, our system considers things like how recent a review is and if the reviewer bought the item on Amazon. It also analyses reviews to verify trustworthiness.

Den Browne
4.0 out of 5 stars Way Down in the Back Streets
Reviewed in the United Kingdom on 27 November 2018
Verified Purchase
I came to Van Morrison's Astral Weeks a couple of years late in 1970, but as soon as I'd heard that hypnotic mix of words, music, places and emotions I was hooked. I played the album incessantly over the next couple of weeks, trying to work out and write down all the lyrics.

I was initially expecting the book to be an in-depth breakdown of the album (like the "33 1/3" series maybe), but Ryan H Walsh's book is a much more subtle and wide-ranging proposition. He takes in all the different cultural elements -mainstream and alternative - going on in Boston at the time in 1968. Contrary to the "Sgt Pepper and kaftans" image of the 60's that prevails now, 1968 was a violent, turbulent year of riots, murders, racial tensions at bursting point, wars and demonstrations. This provides much of the background to the time when Van Morrison relocated from New York and Bang! Records to Boston. He'd provided the label with a huge chart hit in "Brown Eyed Girl", but at the cost of a ruinous contract and some decidedly dodgy business practices. There are some great stories here, culminating in a $20k cash delivery to an abandoned factory to extricate himself from the deal!

However, along with Van Morrison and the album, the author develops a central theme around the Fort Hill commune, and its leader/guru, Mel Lyman. The group acquired a hefty chunk of unwanted ghetto housing (with additional park and Gothic tower), and turned it into the base for an operation that continues to this day. Lyman is the key figure, and comes across as the archetypal 60's commune/cult leader, declaring himself to be God and going through the usual processes of sexual, psychedelic and financial exploitation of his converts - although it's clear that some remain "true believers" to the present day. Several key figures in the making of Astral Weeks pass through the commune and Morrison himself seems to have spent some time there.

The group and its leader gained prominence when Rolling Stone did a lengthy feature, with a sinister looking Mel Lyman on he cover. Dark shades painted with a white crucifix on each lens is not a good or reassuring look. At the time I just wanted more Grateful Dead or Jefferson Airplane, and resented the mag wasting space on some obscure cult. But it's a significant piece of writing - Lyman had been convinced it would lead to the next stage of spreading his word and Godhead beyond Boston and into the world at large. However David Dalton's report exposed some of the many dubious activities and claims around Lyman, thus intensifying the paranoid, isolationist atmosphere at Fort Hill, along with the sinister "head games" that accompanied his "divinity". This in turn made the cult leader even more reclusive, manipulative and paranoid, to the extent that it's never been established for sure if/when/where he died or if he's still around.

Of course the main theme has to be Van Morrison and the album. The author has done some serious research in tracking down most of the local musicians involved with Morrison before the studio work started. There's a great running thread of trying to track down a legendary tape of a live set with Van Morrison performing Astral Weeks with a Them-style local group, one of several stories where J Geils Band singer Peter Wolf figures prominently. There's an equally intriguing quest for a rumoured lost/deleted track from the album, the 10 minute "Train". One of the album's many strengths is the beautiful poem on the sleeve ("I saw you coming from the Cape, Way from Hyannis Port all the way..."), and the author shows how these places connected to Morrison's life. work and thinking while the album came together.

There's a bit of an "Elephant in the room" too - which the author handles with understandable caution - namely, that apart from a few fellow singers and musicians, hardly anyone has a good word to say about Morrison the man. He comes across as rude and bad-tempered, and the author struggles with the difference between the man and his art. Matters aren't helped particularly by Morrison's claims that the songs just come through him, almost like automatic writing - though this sounds more like his resistance to having to explain the music he's created.

There are many fascinating digressions - too many to go into in full - which generally add depth and detail to the making of the record and the people involved. For example, after the Summer of Love feeding frenzy for anyone involved with the "Frisco Sound" died down, the music biz tried to create another market in the form of the "Bosstown Sound" from a few local bands. Only Ultimate Spinach are remembered at all today - say no more. This leads on to the story of the local live music scene, and in turn to the birth and growth of the FM rock radio scene that came to dominate the decade - once again Peter Wolf is a key player. Oh to have heard one of the all-night shows he and Van Morrison did together!

For anyone interested in the story of the Underground Press, the accounts of Fort Hill's Avatar magazine and its battles with the authorities (as with Oz and IT here) are fascinating. Then there are the real wild cards, like the story of the cult involvement of the two lead actors in 60's cult movie Zabriskie Point. The stories around the Velvet Underground's special relationship with Boston are fascinating - they're always seen as a New York band, but played Boston far more often than anywhere else. There are some quite touching accounts too of a very young Jonathan Richman hanging out with the band and looked after by Lou Reed.

So the book certainly isn't the closely focussed "making of the album" I'd expected, but I'd venture it's all the better for that (despite the opinion of some of the other reviews here). There are some pretty wide ranging digressions - the chapter on The Thomas Crown Affair, for example - but the author nearly always brings it back to the point. But for all its breadth of vision, the book's core strength is in communicating the endless fascination of a great album that still inspires love and dedication from listeners new and old half a century later.
Read more
10 people found this helpful
Report abuse

Amazon Customer Jim S.
2.0 out of 5 stars It's not about the album Astral Weeks
Reviewed in the United Kingdom on 14 May 2018
Verified Purchase
Very little of this great album in this book...sorry I bought it 😭😭
Read more
3 people found this helpful
Report abuse

Sideshow Bob
4.0 out of 5 stars Does what it says on the tin
Reviewed in the United Kingdom on 26 May 2018
Verified Purchase
Clearly a couple of people who bought the book didn't read the reviews - or pay much attention to the subtitle: "A Secret History of 1968". It's not about the album, guys, it's about the "Astral Weeks" of 1968 in Boston which provided the background for the album. That said, there's a fair amount of new information about Morrison's time in Boston, including interviews with musicians who worked with him, ex-wife Jane Planet plus J Geils Band frontman and drinking buddy Peter Wolf. The book also sketches in the evolution of the songs for Astral Weeks from their composition, performance at various Boston venues, demos at Ace Studios in Boylston Place to the final recording sessions in New York. It's the best insight into the genesis of the album we're likely to get unless the Man himself puts pen to paper. Don't hold your breath...
Read more
8 people found this helpful
Report abuse
See all reviews