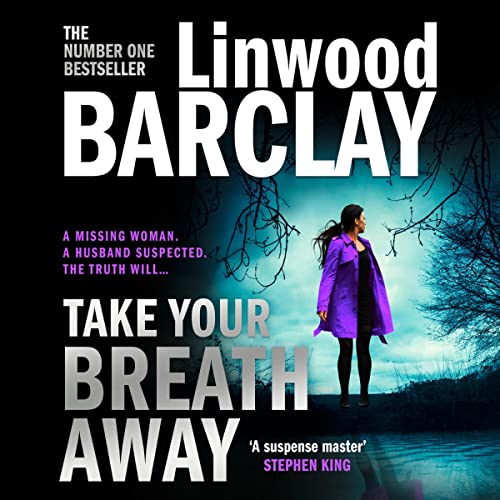 Take Your Breath Away

A missing woman. A husband suspected.

The truth will … Take Your Breath Away

It’s always the husband, isn’t it?

When his wife Brie vanishes from their home one night, never to be seen again, people assume Andy got away with murder. The police can’t build a case against him, but still his friends and neighbours abandon him.

Six years later, Andy’s life is back on track, and he’s settled with a new girlfriend. And when he hears his old house has been bulldozed and rebuilt, he’s not bothered. Things are good.

But then one day, a woman who looks like Brie shows up at their old address, screaming ‘Where’s my house? What happened to my house?’ before vanishing as quickly as she appeared.

And as dark suspicions resurface, Andy’s future depends on discovering what the hell is going on. The trick is staying alive long enough to find out…

Switch between reading the Kindle book & listening to the Audible narration with Whispersync for Voice.
Get the Audible audiobook for the reduced price of $12.49 after you buy the Kindle book.
Learn more about membership
By completing your purchase, you agree to Audible’s Conditions Of Use and Privacy Notice.
Sold and delivered by Audible, an Amazon company

4.2 out of 5 stars
4.2 out of 5
3,032 global ratings
How are ratings calculated?
To calculate the overall star rating and percentage breakdown by star, we don’t use a simple average. Instead, our system considers things like how recent a review is and if the reviewer bought the item on Amazon. It also analyses reviews to verify trustworthiness.

Julie Pallone
5.0 out of 5 stars An Absolute Cracker of a Read
Reviewed in Australia on 22 February 2022
Verified Purchase
As another reviewer stated, this authors books are so spellbinding that you tend to read them too quickly because you can’t put them down. That’s the negative .. as for the positive, I’ve read every single thing this author has published and he’s by far my favourite author. This book however, was outstandingly good. I can usually figure out the bad guy fairly quickly, and the reasons they’ve done what they did, but not this one. It wasn’t until near the end that I twigged where Andrew was going with Isabel, that I realised who the culprit was.. and then the reason for his actions was a surprise as well. As if that wasn’t enough, another shock in the last chapter to cap it off, with some ingenious actions by the main player. All in all, a cleverly written book with an amazing plot and a host of possible wrongdoers. I’ve never not enjoyed Mr Barclay’s books, but this one was an absolute cracker of a read and I’d thoroughly recommend it. Now for the other negative .. I’ll have to wait an age for his next book, but I’ll try to stretch it out a bit next time and not read it in one day, to the detriment of housework and cooking dinner !
Read more
Helpful
Report abuse

stine
3.0 out of 5 stars My Review
Reviewed in Australia on 9 February 2022
Verified Purchase
This book was okay , not the best that I have read , but certainly far from the worst !
Read more
Helpful
Report abuse

Darryl
5.0 out of 5 stars Fantastically Great Book
Reviewed in Australia on 25 April 2022
Verified Purchase
I couldn’t put this down and finished it in a day. This is seriously a great read. I’d recommend this to anyone. Stephen King was right.
Read more
Helpful
Report abuse

When a woman going missing, it is always the husband right? Even when that husband is away at his cabin, hours away, fishing with his best friend. 6 years ago, Brie Mason disappeared in the middle of the night, without a trace. Her husband, Andrew, is still the top of the suspect pool. He has finally gotten his life back on track after losing his wife, and as a consequence, his business and almost his life. He now has a new partner and life is good. Until the call comes that Brie has been spotted.... or has she?

Another fantastic read from Linwood Barclay. Highly recommend to all crime and thriller lovers - this one loved it.
Read more
One person found this helpful
Helpful
Report abuse

Terri T.
TOP 500 REVIEWER
5.0 out of 5 stars Loved this book!!
Reviewed in Australia on 3 February 2022
I so loved this book, it captured my imagination right from the first chapter until the very last page. I enjoyed how the author, a new one to me, has written this captivating story with so many twists, turns and different plots going on, it made my head spin, in a good way.

What happens when one day you go on a fishing trip kissing your wife goodbye, only to come home and find her gone, never to be seen again. Having eventually moved on and now in a new relationship life is looking up for Andrew, but his past is about to come hurling back full force to once again disrupt his whole life and devastate him all over again.
I felt for Andrew in this story, I trusted him and liked him, his character seemed very genuine.
This was a wonderfully written story that had me guessing who might be responsible and who was not. In fact, I was so sure I was right but I was so, so wrong. It is a very clever multi-layered story, and the book literally did take my breath away. Fantastic and an absolute must-read.
Read more
One person found this helpful
Helpful
Report abuse

Suzie Flohr
5.0 out of 5 stars CAPTIVATING SUSPENSE
Reviewed in Australia on 4 February 2022
This book was compulsive reading. I couldn't put it down. It was my first book by Linwood and definately wont be my last. He is the king of suspense and I know why. This book moved at a fast pace and kept you hanging at the end of every chapter. The characters were very well created . So many characters involved in the storyline. You were suspicious of each and everyone of them and their motives. This book is read as a standalone. The actual plot is about a woman who goes missing 6 years ago and then she is starting to be seen around town. There are many people with motives to get rid of her. Its all about secrets and most of them are hiding something. So many twists and turns in this book, you will be pulled one way and then another. This book was very unpredictable and that is the way I like it. Each chapter is narrated by different characters and they are short chapters which makes the book interesting. It will have you guessing who it is right up to the ending.
Read more
Helpful
Report abuse

Gill Brown
5.0 out of 5 stars Nail biting.
Reviewed in Australia on 4 March 2022
Verified Purchase
Linwood Bar lay is my favourite male thriller writer and this book is right up there with his best. Had me on the edge of my seat!
Read more
Helpful
Report abuse
See all reviews

RC
5.0 out of 5 stars There’s two problems with Linwood Barclay
Reviewed in the United Kingdom on 11 February 2022
Verified Purchase
As usual, I was very excited to see a new release coming. Also as usual, I had the same two problems that I have with every LB book.
1. I can’t ever pace myself enough to make it last more than a couple of days.
2. He needs to find a way to write approximately 52 books a year to satisfy my constant literary requirements.
This one was very intriguing although I had a few suspicions that were more or less correct. I didn’t enjoy it any less though and couldn’t stop myself from turning the pages. Now I have another 51 weeks to go ☹️
Read more
12 people found this helpful
Report abuse

Kindred spirit
5.0 out of 5 stars Excellent! Linwood does it again!
Reviewed in the United Kingdom on 13 March 2022
Verified Purchase
I loved this book. I always set aside ‘protected’ time in order to devour Linwood’s new releases and he never fails to deliver an excellent and engaging read with plenty of twists and turns along the way. Linwood’s pacing is always excellent and you can’t wait to turn the page to find out what is going to happen next.
Well done Mr Barclay!
Also, it’s such a refreshing change to see an author describing animals/creatures in such a positive way. As an animal lover myself, I can never finish a book which has any undertones of animal abuse and it was lovely to read a story in which they were described in such a positive/humane way.
Read more
5 people found this helpful
Report abuse

Helen Masterton
2.0 out of 5 stars Wooden characters and clunky plot
Reviewed in the United Kingdom on 24 February 2022
Verified Purchase
I’ve never read anything by this author before and I don’t think I will read any more. It was disappointing.
The characters were all rather two dimensional and the dialogue was functional at best. The descriptive passages were there to move the plot along but just didn’t bring the story to life. I take my hat off to anyone who can write a novel, I certainly couldn’t, but for a reader to really engage with the writing there has to be more than just a story. The author says he wrote it during lockdown. It’s funny but that’s exactly how the book feels, like life during lockdown - sort of unreal and half-lived!
I’m really surprised by all the great reviews and by the price of the kindle book.
Read more
6 people found this helpful
Report abuse

Mrs. H.E.Morrison
5.0 out of 5 stars Linwood Barclay does it again!
Reviewed in the United Kingdom on 6 February 2022
Verified Purchase
I had pre ordered this book and couldn't wait for it to arrive. I am a huge fan of this author.
I tried to ration myself to a couple of chapters each evening, but in the end gave in and finished it on the second night!
I did have a suspicion of the culprit, but this in no way spoiled it for me. The characters were interesting and the p.ot beautifully worked.
Now it have ages to wait for the next Linwood Barclay to arrive.
Read more
4 people found this helpful
Report abuse

A. W. Skinner
1.0 out of 5 stars Absolute rubbish.
Reviewed in the United Kingdom on 23 March 2022
Verified Purchase
The plot is ridiculous, and the characters just cardboard cut-outs. However, what annoyed me most was the number of typos, in particular the various spellings of the name Deirdre, who wasn't even an important character. If the publishers are too lazy to proof read, a book is not worth reading.
Read more
3 people found this helpful
Report abuse
See all reviews