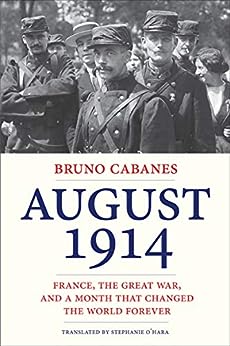 August 1914: France, the Great War, and a Month that Changed the World Forever Kindle Edition

A renowned military historian closely examines the first month of World War I in France.

On August 1, 1914, war erupted into the lives of millions of families across France. Most people thought the conflict would last just a few weeks . . .

Yet before the month was out, twenty-seven thousand French soldiers died on the single day of August 22 alone—the worst catastrophe in French military history. Refugees streamed into France as the German army advanced, spreading rumors that amplified still more the ordeal of war. Citizens of enemy countries who were living in France were viciously scapegoated. Drawing from diaries, personal correspondence, police reports, and government archives, Bruno Cabanes renders an intimate, narrative-driven study of the first weeks of World War I in France. Told from the perspective of ordinary women and men caught in the flood of mobilization, this revealing book deepens our understanding of the traumatic impact of war on soldiers and civilians alike.

“An exceptional book, a brilliant, moving, and insightful analysis of national mobilization.” —Martha Hanna, author of Your Death Would Be Mine: Paul and Marie Pireaud in the Great War

“This book deserves a wide readership from historians, critics and anyone interested in the catastrophe of war.” —Mary Louise Roberts, Distinguished Lucie Aubrac and Plaenert-Bascom Professor of History, University of Wisconsin, Madison

“The sounds, sights and emotions of August, 1914 are all evoked with exceptional skill.” —David A. Bell, author of The First Total War: Napoleon’s Europe and the Birth of Warfare as We Know It
Read more
Previous page
Next page

“This is an exceptional book, a brilliant, moving, and insightful analysis of national mobilization. - Martha Hanna, author of Your Death Would Be Mine: Paul and Marie Pireaud in the Great War “Bruno Cabanes is without question one of the leading historians of War and Society writing anywhere. August 1914 is a remarkable account of the first month of the Great War in France. Brilliantly written, it brings together diplomatic, military, political, and social history in an engrossing narrative of daily life in a new and unprecedentedly murderous conflict. - John Merriman, Charles Seymour Professor of History, Yale University “Renowned military historian Bruno Cabanes has given us an extraordinarily moving account of the first traumatic weeks of the Great War. Using largely neglected primary sources and eschewing the well-trodden diplomatic approach, Cabanes focuses on the passions and traumas of an entire people. This book deserves a wide readership from historians, critics and anyone interested in the catastrophe of war. - Mary Louise Roberts, Distinguished Lucie Aubrac and Plaenert-Bascom Professor of History, University of Wisconsin, Madison “The First World War has now faded below the horizon of living memory, but in this marvelous book, beautifully written and translated, Bruno Cabanes gives us as vivid a sense as possible of what it was like to be in France during the war's first month. The sounds, sights and emotions of August, 1914 are all evoked with exceptional skill. - David A. Bell, author of The First Total War: Napoleon's Europe and the Birth of Warfare as We Know   --This text refers to the hardcover edition.

Bruno Cabanes is the Donald G. and Mary A. Dunn Chair in Modern Military History at Ohio State University. Before coming to Ohio State, he taught at Yale University. He is the author of The Great War and the Origins of Humanitarianism, 1918-1924. He lives with his family in Bexley, OH. Stephanie O'Hara is associate professor of French and Women's and Gender Studies at the University of Massachusetts Dartmouth. --This text refers to the hardcover edition.

4.4 out of 5 stars
4.4 out of 5
21 global ratings
How are ratings calculated?
To calculate the overall star rating and percentage breakdown by star, we don’t use a simple average. Instead, our system considers things like how recent a review is and if the reviewer bought the item on Amazon. It also analyses reviews to verify trustworthiness.

Rod Thrusty
4.0 out of 5 stars Less War Information than I'd Expected
Reviewed in the United Kingdom on 18 April 2020
Verified Purchase
It's less about the war and more about French society during the opening of the war. It's also quite short and needed more proof reading.

The information it did contain was interesting, but if you're looking for something more specifically about combat during the opening of WW1 in Europe something like Lost Opportunity by Simon House, Catastrophe by Max Hastings or Sewell Tyng's Campaign of the Marne will do you better.

James H. Lockhart
5.0 out of 5 stars Special Book
Reviewed in the United States on 21 November 2016
Verified Purchase
I have read a number of books on WWI but this one is unique in that it gives a sort of ground's eye look at what it was like to be alive in France in August, 1914. It gave the kind of personal insight that brought you into the lives of individual soldiers and families. You could feel the heat, the heavy uniforms, the confusion/sadness at young men and husbands leaving for war, and the awfulness of when the industrial age met the 20th century. Well translated and it will be one of my "keepers".
Read more
8 people found this helpful
Report abuse

Paul M Conlin
5.0 out of 5 stars Turns a popular misconception on its head.
Reviewed in the United States on 8 March 2017
Verified Purchase
The trench warfare of WW1 wasn't the result of unimaginative Generals. Instead, it was an adaptation to the slaughter of mobile non-trench warfare in August 1914.
Read more
3 people found this helpful
Report abuse

Gary McCollim
5.0 out of 5 stars France experiences war
Reviewed in the United States on 9 March 2017
Verified Purchase
This book relates in some detail the experience of going to war from Paris to the provinces. How one month changed the lives of millions of Frenchmen and women.
Read more
2 people found this helpful
Report abuse

Le Skjervheim
4.0 out of 5 stars Very good. A great insight into August 1914
Reviewed in the United States on 1 September 2017
Verified Purchase
Very good. A great insight into August 1914.
Read more
3 people found this helpful
Report abuse
See all reviews
Report an issue
Does this item contain inappropriate content?
Report
Do you believe that this item violates a copyright?
Report
Does this item contain quality or formatting issues?
Report