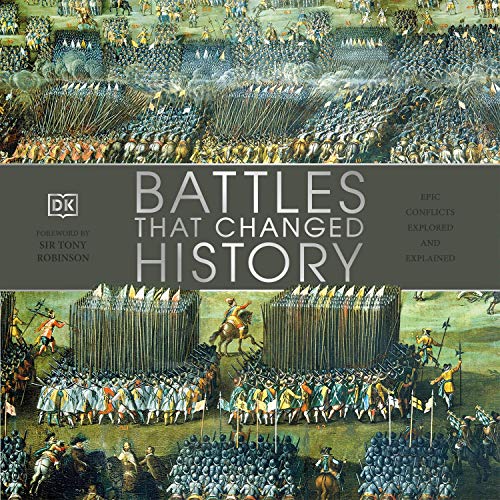 A journey through more than 3,000 years of combat, including Dunkirk and the Battle of Britain.

From the fury of the Punic Wars to the icy waters of Dunkirk, relive more than 3,000 years of world-changing combat with this guide to the most famous battles in history, including a foreword from TV presenter and historian Sir Tony Robinson.

This military history book takes you on a journey through the battlefields of history, from the ancient world to the American Civil War, World War I, World War II, the Cold War and beyond, revealing the stories behind more than 90 of the most important battles ever to take place and show how fateful decisions led to glorious victories and crushing defeats.

From medieval battles and great naval battles to the era of high-tech air battles, key campaigns are analysed in detail - the weapons, the soldiers and the military strategy. Famous military leaders are profiled, including Alexander the Great, Napoleon and Rommel and crucial arms, armour and equipment are explained.

Whether at Marathon, Agincourt, Gettysburg or Stalingrad, Battles That Changed History takes you into the thick of combat and shows how kingdoms and empires have been won and lost on the battlefield.

Read more
©2018 Dorling Kindersley Ltd (P)2020 DK Audio
Previous page
Next page
Learn more about membership
By completing your purchase, you agree to Audible’s Conditions Of Use and Privacy Notice.
Sold and delivered by Audible, an Amazon company
Share

4.7 out of 5 stars
4.7 out of 5
389 global ratings
How are ratings calculated?
To calculate the overall star rating and percentage breakdown by star, we don’t use a simple average. Instead, our system considers things like how recent a review is and if the reviewer bought the item on Amazon. It also analyses reviews to verify trustworthiness.

Jeremy Dezso
4.0 out of 5 stars Great book
Reviewed in Australia on 19 June 2021
Verified Purchase
Was a gift for my brother. He and I are both history nuts and I was very impressed with what I read as I flicked through it.
Read more
Helpful
Report abuse
See all reviews

spudbuddy
5.0 out of 5 stars Fantastic Book
Reviewed in the United Kingdom on 12 June 2020
Verified Purchase
This is a superb book. Some of the other reviewers seem to miss the point of the book. It doesn’t go in to great detail about the battles that have changed history. Instead it gives a summary of the key details and provides just enough information to give the reader a basic understanding of the battle. After reading about several battles I have now ordered books about them to further my understanding.
Read more
16 people found this helpful
Report abuse

Customer88
5.0 out of 5 stars Fairly comprehensive summary of history altering battles- with a few omissions
Reviewed in the United Kingdom on 2 August 2021
Verified Purchase
Producing an accessible single volume summary of history's most influential battles is an ambitious task, and always going to be subjective, but this makes a brave stab at it. A bit more writing and fewer lavish full page illustrations could have added more information at the cost of a reduced visual impact, but I wouldn't have minded. Some critical but largely overlooked battles have at last got a mention- 5 stars for including Ain Jalut!!! There have been some important omissions- Plataea 479BC, Yarmuk 636, Siege of Constantinople 717, Battle of Warsaw 1920, Fall of Singapore 1942- and conflicts without lasting historical impact included such as the Medway Raid and Little Big Horn. That said, this is deserving of a place in every school library and those of military history enthusiasts. The best single volume summary of the subject I am aware of.
Read more
2 people found this helpful
Report abuse

A
5.0 out of 5 stars Highly recommended.
Reviewed in the United Kingdom on 14 August 2020
Verified Purchase
I love history and this book is perfect for my collection. It is used as a light read and makes a perfect coffee table book as it looks beautiful and has many pictures. The book offers an explanation of the tactics, conditions, motivations and outcomes of many major battles. It doesn't contain much detail and most battles are explained in 2 or 3 pages but it gives you an insight into many major battles. It has also inspired me to research more into the battles (wars) that are included in this book. Definitely worth the price and I recommend it for somebody who wants to expand their knowledge about history.
Read more
3 people found this helpful
Report abuse

Stephen Hartwell
1.0 out of 5 stars Rubbish
Reviewed in the United Kingdom on 23 March 2019
Verified Purchase
What a waste of money . The Battle of Britain contained less than 2 pages , Waterloo and Trafalger the same . Pages of unknown foreign battles from hundreds of years ago nobody has heard of . Just a complete waste of money . Very disappointed .
Read more
11 people found this helpful
Report abuse

Blue Knight
4.0 out of 5 stars Coffee Table Book
Reviewed in the United Kingdom on 2 December 2018
Verified Purchase
This is a good value, attractive coffee table book. It seems to cover all the important battles throughout history that spring readily to mind. Understandably, given the large number of battles which are included, it does not go into the detail that someone intending to study a particular battle in depth might require.
Read more
10 people found this helpful
Report abuse
See all reviews
Back to top
Get to Know Us
Make Money with Us
Let Us Help You
And don't forget:
© 1996-2022, Amazon.com, Inc. or its affiliates