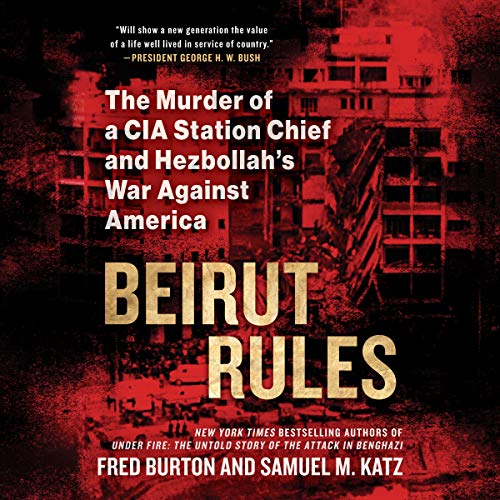 Beirut Rules: The Murder of a CIA Station Chief and Hezbollah's War Against America

4.7 out of 5 stars
4.7 out of 5
84 global ratings
How are ratings calculated?
To calculate the overall star rating and percentage breakdown by star, we don’t use a simple average. Instead, our system considers things like how recent a review is and if the reviewer bought the item on Amazon. It also analyses reviews to verify trustworthiness.

Kindle Customer
5.0 out of 5 stars Great read
Reviewed in the United Kingdom on 28 November 2018
Verified Purchase
Why did the head of the CIA in beruit live outside the embassy bizarre poor man still interesting about the iranians
Read more
Report abuse

Mark P Pfeiffer
5.0 out of 5 stars Excellent book
Reviewed in Germany on 19 May 2019
Verified Purchase
Not only does it describe the characters in good detail but also a wonderful city that still carries this history. It was wonderful to see in real life what now this place looks like so well described in the book!
Read more
Report abuse

K. Hamsun
1.0 out of 5 stars Buyer beware...
Reviewed in the United States on 31 October 2018
Verified Purchase
Imagine you place an order for a book from Amazon you've been anticipating reading with relish. Now also imagine that just before delivery of aforementioned book Amazon hand a sharpie to some malevolent Troll with explicit orders to go through the book and arbitrarily strike out passages at will. A line here, a paragraph there, half a page on the next one. Well this is exactly what has happened here, except the "malicious Troll" in question is none other than a CIA censor. Why the two authors (Fred Burton and Samuel M. Katz) handed the book over to the CIA before publication is anyone's guess, unless of course Langley subsidized publication (Operation Mockingbird anyone)?
And yet it's a shame, because the book attempts to cover a subject that has went woefully uncovered, in my opinion, since the events themselves transpired: the kidnapping and murder of CIA station chief William F. Buckley in the treacherous urban battlefield that was Beirut in the 1980's.
The subject has been broached in at least one of former (if there is such a thing) CIA operative Robert Baer's excellent books on the subject matter of clandestine warfare, and how I do wish Baer himself and taken up the mantle, because it's a story worth telling. A story of one brave man's abduction and torture by Hezbollah, and of how he was hung out to dry by his own government. Baer, I believe, mentions the lads on the ground knew where their chief was being held, but were stopped by the powers that be from attempting any sort of rescue.
The book is not only unreadable because it is heavily redacted, it is also unreadable because of the sycophantic slabbering of the authors, as they drool over fellow CIA stooges David Ignatius and Thomas Friedman. maybe next time they could take a leaf from the excellent book written by Ronen Bergman, Rise and Kill First, a book about past and present covert warfare by the Mossad, and which Bergamn was threatened on several occasions, with his life, from publishing because he'd written it under deep cover, unlike the two previously mentioned stooges who penned this tome.
Read more
41 people found this helpful
Report abuse

Old Asia Hand
5.0 out of 5 stars A mesmerizing tale with a fascinating subtext
Reviewed in the United States on 16 June 2019
Verified Purchase
I'm absolutely baffled why some reviewers here seem so upset about the redactions in the text and even spin dark conspiracy theories speculating that the CIA is subsidizing the book's publication and therefore is telling the authors what to write. What incredible drivel. Anyone who has read more than one spy novel ought to know the circumstances under which the Agency has a legal obligation to vet a book before publication and this book clearly falls within that mandate.

Indeed, leaving in the redactions exactly as they were made by the Agency was a masterstroke by the authors. Those redactions now provide a fascinating subtext for the entire story by throwing a spotlight on what the Agency might prefer you not to know about it. Wonderful writing, extraordinary tale, fascinating subtext. What's not to like?
Read more
5 people found this helpful
Report abuse

MagMan
5.0 out of 5 stars Great read - especially if you have some association with Beirut
Reviewed in the United States on 30 January 2019
Verified Purchase
Having lived in Beirut in the 70's as a State Department dependent, this book brought back many memories of what was a very beautiful city when we arrived (72) and the beginning of the end when we left (75). The material in the book seemed well researched, but it is interesting if you read wikipedia on both William Buckley and William Higgins, there are some differences between those accounts and this book. Guess that is the nature of Intelligence gathering and analysis, and what to believe. Highly recommend the book.
Read more
4 people found this helpful
Report abuse
See all reviews
Back to top
Get to Know Us
Make Money with Us
Let Us Help You
And don't forget:
© 1996-2021, Amazon.com, Inc. or its affiliates