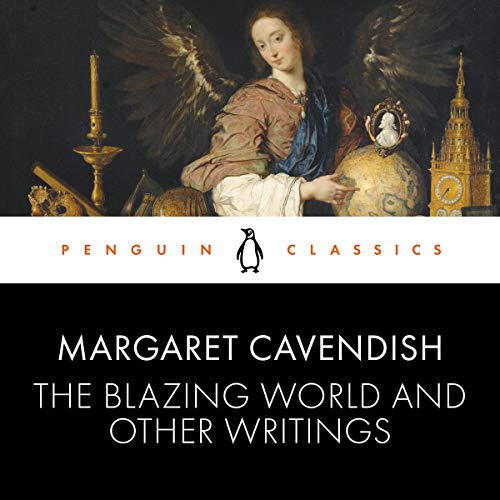 The Blazing World and Other Writings: Penguin Classics

4.4 out of 5 stars
4.4 out of 5
94 global ratings
How are ratings calculated?
To calculate the overall star rating and percentage breakdown by star, we don’t use a simple average. Instead, our system considers things like how recent a review is and if the reviewer bought the item on Amazon. It also analyses reviews to verify trustworthiness.

I. Jones
5.0 out of 5 stars Entertaining works of prot-feminist imagination
Reviewed in the United Kingdom on 1 July 2019
Verified Purchase
A few months ago, I read an article in the Guardian Review about the Penguin Classics series. The author of the article selected ten titles – apparently at random – to illustrate the richness and variety of the works available from Penguin. I realised that of the ten works, I had only read one, so I resolved to read the other nine this year. This is the fourth of those nine that I’ve read so far.
Like most female writers before the modern era, Margaret Cavendish was of the elite. The fact that she became Duchess of Newcastle by marriage is an indicator of her social status. As such she had access to a level of privilege far beyond what was available to lesser mortals – male as well as female – in the seventeenth century. But as a woman she had precious little opportunity to put her talents to practical ends. She doesn’t seem to have had much education as a child, but as a young adult she must have spent a great deal of time educating herself as, at the age of thirty, she suddenly unleashed a torrent of fiction, philosophy, letters, plays, poetry, autobiography and a biography of her husband. The result is a mixture of radicalism, proto-feminism, social conservatism and a respect for hierarchy (she was on the Royalist side in the Civil Wars).
What we’re presented with in this edition is three works of creative fiction that constitute a tiny taster of Her Grace’s oeuvre. All three focus on a woman, or women, negotiating a world ruled by men. Although The Blazing World is the centrepiece of the collection, my favourite was Assaulted and Pursued Chastity in which the heroine disguises herself as a young man and achieves great things simply because in appearing to be male she is given the freedom to use her intelligence, fortitude and multifarious talents without any gender constraints. I found The Blazing World more difficult. There is a lot of scientific and philosophical material packed into it which might have been cutting edge when it was written but now seems slightly dull. What makes the Blazing World close to a utopia is that it only has one religion that is celebrated in one way with no doctrinal divisions or sects. This is an obvious comment on Margaret’s own turbulent times when religious controversy and division caused so much violence and bloodshed. Another interesting feature is the idea that if you’re not entirely happy with the world as it is, you can create a better world in your mind. I suspect that Margaret spent a large amount of her time doing just that.
As I said, this is a taster of Margaret’s work, and I would happily read more if I could find it.
Read more
5 people found this helpful
Report abuse

Jim
1.0 out of 5 stars Only of interest to academics I think. Gives a bad name to vanity publishing.
Reviewed in the United Kingdom on 3 February 2021
Verified Purchase
Only read "The Blazing World. Imagine being force-fed hallucinogenic mushrooms and writing in a stream of consciousness for a few hundred pages. The semi-colon has never done such heavy lifting.
Read more
Report abuse

S. King
4.0 out of 5 stars A medieval point of view.
Reviewed in the United Kingdom on 12 November 2019
Verified Purchase
It's not a gripping storyline, but it does give an understanding of how the 16th science tried to make sense of the world.
Read more
Report abuse

Chicklit reader
5.0 out of 5 stars A must read for all female writers
Reviewed in the United Kingdom on 19 June 2015
Verified Purchase
Hard to read at first but once you get into it you realise this woman had real passion and imagination. Fantastic for a 17thc woman to write science fiction.
Read more
Report abuse
See all reviews
Back to top
Get to Know Us
Make Money with Us
Let Us Help You
And don't forget:
© 1996-2021, Amazon.com, Inc. or its affiliates