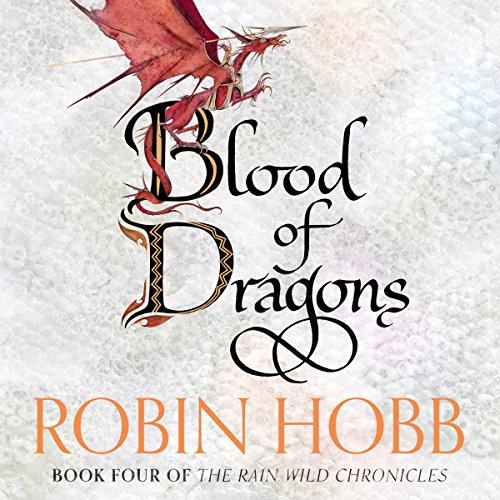 Dragon blood and scales, dragon liver and eyes and teeth. All required ingredients for medicines with near-miraculous healing powers. The legendary blue dragon Tintaglia is dying of wounds inflicted by hunters sent by the Duke of Chalced, who meanwhile preserves his dwindling life by consuming the blood of the dragon’s poet Selden Vestrit.

If Tintaglia perishes, her ancestral memories will die with her. And the dragons in the ancient city of Kelsingra will lose the secret knowledge they need to survive. Their keepers immerse themselves in the dangerously addictive memory-stone records of the city in the hope of recovering the Elderling magic that once allowed humans and dragons to coexist. In doing so they risk losing their own identities, even their lives.

And danger threatens from beyond the city, too. For war is coming: war between dragonkind and those who would destroy them.

Switch between reading the Kindle book & listening to the Audible narration with Whispersync for Voice.
Get the Audible audiobook for the reduced price of $27.33 after you buy the Kindle book.
Learn more about membership
By completing your purchase, you agree to Audible’s Conditions Of Use and Privacy Notice.
Sold and delivered by Audible, an Amazon company

4.6 out of 5 stars
4.6 out of 5
2,305 global ratings
How are ratings calculated?
To calculate the overall star rating and percentage breakdown by star, we don’t use a simple average. Instead, our system considers things like how recent a review is and if the reviewer bought the item on Amazon. It also analyses reviews to verify trustworthiness.

Friedricecooker
4.0 out of 5 stars Another fabulous read from Robin Hobb
Reviewed in Australia on 23 January 2014
Verified Purchase
This series is very enjoyable and has the same quality you expect from Robin Hobb.

Some surprising twists, great linking into previous story lines from other books in the larger range of The Rainwilds series and story telling of vivid colour and fantastic lost world feel.

If you loved the other books in the series, you'll love this one too.
Read more
Helpful
Report abuse

jao
5.0 out of 5 stars Five Stars
Reviewed in Australia on 9 January 2016
Verified Purchase
Love Robin Hobb"s books would love to see another after this.
Read more
Helpful
Report abuse

sandi seymour
5.0 out of 5 stars loved the series
Reviewed in Australia on 13 April 2014
Verified Purchase
Again a journey to understanding the self is explored in this wonderful series of stories. Love wonder and living a good life with out concern about difference
Read more
Helpful
Report abuse

Journeying Soul
TOP 1000 REVIEWER
5.0 out of 5 stars A 'coming of age' conclusion
Reviewed in Australia on 25 September 2017
For over two months I have been caught up in Robin Hobb's enchanted world. Upon reflection I like Fitz and his story and world the best and look forward to now embarking on the final leg of this epic adventure with him and the Fool.

I have enjoyed the adventure up the Rain Wild River and the coming of age of the dragons, their keepers and all those surrounding them. At times the story did drag on, well that is how it felt for me, and found it surprising how quickly it was all concluded.

There were times when I felt that I may have been drowning in the story, or at least getting consumed by it, a little like how some of the characters found themselves being sucked into the memory stones.

A great read none the less, well worth the time and emotional input for all those who love fantasy.
Read more
Helpful
Report abuse

Aussie Reader
5.0 out of 5 stars Awesome
Reviewed in Australia on 3 April 2014
Was sad to finish this book as it is the last book in the series and the last book of Robin's that I had left to read.
Read more
Helpful
Report abuse

susan a farrell
5.0 out of 5 stars Amazing
Reviewed in the United Kingdom on 18 October 2020
Verified Purchase
What can I say I was totally enthralled from start to finish and felt an overwhelming sense of loss once I finished the Rain Wild chronicle 4 books.
I read the complete Liveship Traders Trilogy and really enjoyed this and decided to read the Rain Wild Chronicles, when I started to read this I was a little disappointed at first because the characters I had grown to know and love in the Liveship Trilogy were no longer the central point of the books but I persevered and was pleased that I did. I could not put the books down.
Robin Hobb writes with real magic and once you start to read you quickly get caught up in the books and the characters. I found myself laughing and crying and cheering when one thing I was waiting to happen finally did.
I am now reading the Assassin Trilogy and I have to say she has done it again.
Don't know what I will do once I have read all the books. It is rare to find an author that weaves a plot so well with such imagination.
Read more
3 people found this helpful
Report abuse

Nick Artt
1.0 out of 5 stars How to butcher the Fantasy Genre!
Reviewed in the United Kingdom on 1 September 2020
Verified Purchase
A plain example of a book that tries to please a multitude of readers (most diverse) by butchering the Fantasy Genre!

A total failure in the series, which saw an increasing declining from book 1 to book 4..
Many things I've wanted to see develop in book 4, hoping the series will recover, yet it was all a disappointment,
Instead of developing on stronger things that we have been told in the previous books, we are introduced to a new element, which none of the previous tales even alluded at, and it keeps on dragging on with a dizzying head-hopping until I wished I never started reading it.

Sedric could have taken a lead role in the plot, developing the one good element of book 3, the relation with his dragon, who he tried to kill.. instead he is happy to have found "new love" and all the rest does not even matter.
Read more
2 people found this helpful
Report abuse

allychris
5.0 out of 5 stars The best of Robin Hobb
Reviewed in the United Kingdom on 28 March 2022
Verified Purchase
Robin Hobb is hands down my favourite author. I have read every book numerous times over the decades. The Rain Wild Chronicles covering the story of the dragons are my favourite. The journey of society’s unwanted deformed youngsters travelling with equally unwanted and deformed dragons in search of a city they can call home. As they travel they grow, become connected to one another and then the magic starts to happen. Once they arrive at the city they are changed beyond recognition and powerful beyond belief. Then the revenge on those hunting them starts. It’s truely magical story telling that fulfills all your wishes. Enjoy
Read more
Report abuse

Beckistan
5.0 out of 5 stars 5 starts but slightly disappointed
Reviewed in the United Kingdom on 20 April 2013
Verified Purchase
Although I love the book I feel as if it is too short and some parts of e story could have been given in more detail. As there is so much going on you are left with the basis of things. The characters are still present and you get to see a bit more if each but the book is not as long as many of the other novels and I think the ending is particularly sparse. Even thou Robin Hobb has a way of rounding things up in a summary that explains it all there are still things you would have liked to have read in detail.

Other reviews spoke of the end of one particular character as if we're wrong, well it pleased me it was just a shame that it didn't get a bit more attention and therefore a reaction from the characters. We do however get a slight revisit to some old Bingtown characters that draws the story to a nice close and yet again the story is left open to come back to.

Overall I think it's brilliant it's just a shame that the ending seems rushed and we don't get a final story for all the characters that play a major part in all the books. I have to say though it does seem to have the happy endings that many readers expressed was missing from other trilogies. I hope that we get to return!!!!
Read more
6 people found this helpful
Report abuse

Lucy W
5.0 out of 5 stars A gripping read!
Reviewed in the United Kingdom on 13 May 2017
Verified Purchase
I have loved these books and definitely recommend reading the liveship trilogy beforehand. The only thing that disappointed me was a lack of detail at the end. I can't say too much without spoiling it so I'll just say I wish there had been more written about the final battle! She could have gone to town with that but just seemed to skim over it in my opinion which I felt was a shame as she's such an amazing story teller. I love her eloquence though and I looked forward to picking my kindle up each day and finding out how the characters were getting on! A great read and I miss being on this journey with the characters already. I'd highly recommend these books.
Read more
3 people found this helpful
Report abuse
See all reviews