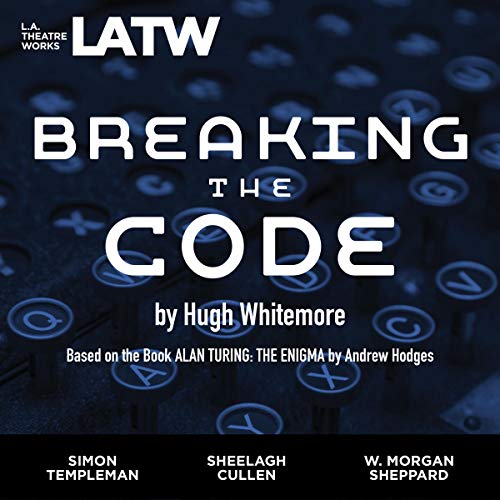 Breaking the Code: Based on the book ALAN TURING: THE ENIGMA by Andrew Hodges

Simon Templeman stars as brilliant mathematician Alan Turing, the man who cracked the German Enigma code and enabled the allies to win World War II. Shortly after, Turing was to find that the country he saved cared less about his genius and more about his sexual orientation.

Based on the book Alan Turing: The Enigma by Andrew Hodges.

Recorded before a live audience at the Skirball Cultural Center, Los Angeles in July, 2003.

Breaking the Code is part of L.A. Theatre Works’ Relativity Series featuring science-themed plays. Lead funding for the Relativity Series is provided by the Alfred P. Sloan Foundation to enhance public understanding of science and technology in the modern world.

Read more
(P)2003 L.A. Theatre Works
Previous page
Next page
Last chance - Ends Thursday!
Learn more about membership
By completing your purchase, you agree to Audible’s Conditions Of Use and Privacy Notice.
Sold and delivered by Audible, an Amazon company

4.7 out of 5 stars
4.7 out of 5
24 global ratings
How are ratings calculated?
To calculate the overall star rating and percentage breakdown by star, we don’t use a simple average. Instead, our system considers things like how recent a review is and if the reviewer bought the item on Amazon. It also analyses reviews to verify trustworthiness.

Toni Wiltshire
5.0 out of 5 stars Loved it!
Reviewed in the United Kingdom on 1 July 2013
Verified Purchase
I saw the film of Breaking the Code before I read the play. I think this made the experience more satisfying, because rather than the film taking away from the play, the play only added to what I'd seen in the film.

I also loved that it had the original cast list, the film cast list and the costume list. It also had the stage set-up diagrams at the back which were very interesting. I genuinely wish I was old enough to have gone and seen this while it was being performed on stage.

I'm now reading "Alan Turing: The Enigma" by Andrew Hodges, on which the play is based (I'm doing it all backwards) and have also found that to be very interesting when reflecting on the play also.

Overall, Breaking the Code by Hugh Whitemore is a great read, I would highly recommend it!
Read more
One person found this helpful
Report abuse

S. McInnis
4.0 out of 5 stars The Nazi Enigma Code & Social Codes of World War 2 England
Reviewed in the United States on 29 August 2010
Verified Purchase
This drama revels a man who was not, in many ways, a regular guy.

Math Genius, Alan Mathison Turing was able to break the Nazi Enigma Code for the British government. Mr. Turing saw no need to live a lie. Against his Supervisor's & his Mother's advice, Alan accepts in himself what society will not. This story is sprinkled with early computer development. "Breaking the Code" is a view in the difficulties of a gay man in the mid-twentith century England. When Alan incurs a home robbery, the police did not seek the thief. Law enforcement incarcerated Turing for being a homosexual, leaving the theft unsolved.

Facts related, but not in this play:
1. On 10 September 2009, Alan M. Turing was one of five people ever to receive an apology from the UK Government for the injustice received under British Law.
2. Since 1986 the annual "A. M. Turing Award" is given by Stanford University. The Turing Award is computer science 'Noble' equivalent.
3. March 2012, Historian George Dyson's newest book, "Turing's Cathedral" is set to be released.
Read more
5 people found this helpful
Report abuse

G.G.
5.0 out of 5 stars REALLY GOOD BOOK.
Reviewed in the United States on 15 February 2018
Verified Purchase
THIS WAS A GREAT AND KEPT YOUR INTEREST. MY SISTER TOLD ME THAT THERE IS A MOVIE THAT HAS BEEN MADE FROM THE BOOK ILL BE LOOKING FOR THE MOVIE,.
Read more
Report abuse
See all reviews