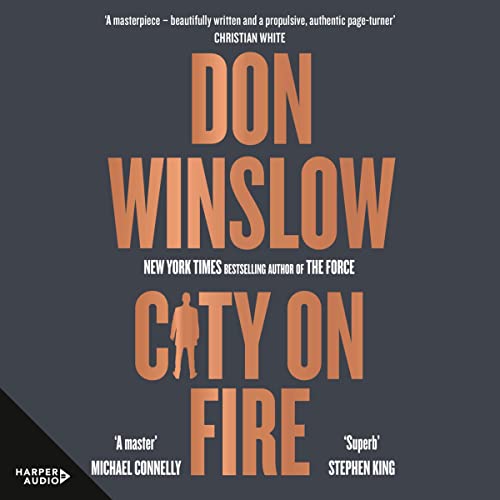 From the number one internationally best-selling author of the Cartel Trilogy, The Force, and Broken comes the first novel in an epic crime saga about the Irish and Italian crime syndicates in America during the 1980s and 1990s.

Two criminal empires together control all of New England.

Until a beautiful modern-day Helen of Troy comes between the Irish and the Italians, launching a war that will see them kill each other, destroy an alliance, and set a city on fire.

Danny Ryan yearns for a more "legit" life and a place in the sun. But as the bloody conflict stacks body on body and brother turns against brother, Danny has to rise above himself.

To save the friends he loves like family and the family he has sworn to protect, he becomes a leader, a ruthless strategist, and a master of a treacherous game in which the winners live and the losers die.

From the gritty streets of Providence to the glittering screens of Hollywood to the golden casinos of Las Vegas, Danny Ryan will forge a dynasty.

"Is there any doubt that Don Winslow's the greatest?" (New York Times)

"One of the best thriller writers on the planet." (Esquire)

"Epic, ambitious, majestic, City on Fire is The Godfather for our generation." (Adrian McKinty, best-selling author of The Chain)

Switch between reading the Kindle book & listening to the Audible narration with Whispersync for Voice.
Get the Audible audiobook for the reduced price of $14.99 after you buy the Kindle book.
Last chance - Ends Thursday!
Learn more about membership
By completing your purchase, you agree to Audible’s Conditions Of Use and Privacy Notice.
Sold and delivered by Audible, an Amazon company

4.4 out of 5 stars
4.4 out of 5
3,320 global ratings
How are ratings calculated?
To calculate the overall star rating and percentage breakdown by star, we don’t use a simple average. Instead, our system considers things like how recent a review is and if the reviewer bought the item on Amazon. It also analyses reviews to verify trustworthiness.

Amazon Customer
5.0 out of 5 stars STUNNING WORLD CLASS STORY TELLING
Reviewed in Australia on 12 June 2022
Just hit the 33% mark and I know this book is worth full marks. Written with amazing “affection” for the violence of mafia-dom it’s a sophisticated take on an American sub-culture. It read a bit like classic noir but it’s way too real for that and to be honest it’s so impactful it feels like non fiction. This is the first DON WINSLOW book I have ever read but it’s destined to be the first of many.
Images in this review

Adrian gough
5.0 out of 5 stars Don Winslow amazing as always
Reviewed in Australia on 13 May 2022
Verified Purchase
Firstly if you haven’t read the border trilogy and the force do yourself a favour. This book is flawless as usual. If Stephen King is the master of horror then Don Winslow is his equal in crime fiction. He stands head and shoulders above the pack. Can’t wait for the next instalments . I believe they are already written so let’s go already. Thank you Mr Winslow.
Read more
Helpful
Report abuse

Mandy White (mandylovestoread)
TOP 50 REVIEWER
5.0 out of 5 stars Dark and Gritty - so good!
Reviewed in Australia on 13 May 2022
I have always wanted to read a Don Winslow book, so when the Tandem Global Readalong for City on Fire was announced I jumped at the chance. My husband is a big fan of this author and assured me that I would be too. Happy to say that he was right and I am wondering why it took me so long to read him. Thankfully we have his others books on the bookshelves at home and I will be reading them soon.

Now, I am a terrible buddy reader, I make no secret of that. I really did try to keep pace on this one but I ended up finishing it in 3 nights. Once I started I couldn't stop reading. I was drawn into 1980's Rhode Island and the world of Danny Ryan. This is a character that I got emotionally attached to quite early on. He becomes the unofficial leader and the pressure of this as well as his family makes him a really interesting character.

The war began over a woman. Pam came into their lives and the work is turned upside down. The Italian's wage war on the Irish and it is violent! Some scenes won't be for everyone, but as a reader of dark and gritty crime books, I was there for it all.

This is a the start of a new trilogy by Don Winslow and I am already wanting more. It was great to chat about the story with my fellow Aussie read a long members. How we all had different takes on characters and situations.

This is a compelling and dark read, right up my alley. A big thanks to Harper Collins Australia and Tandem Global for having me along. Bring on Book 2

Caz the bookworm /Caroline O'Sullivan
4.0 out of 5 stars Great read
Reviewed in Australia on 8 May 2022
I was very lucky to receive a copy of this book from the author, Tandem Collective Global and Harper Collins NZ to read as part of a worldwide Readalong.

This is not my normal genre but I really liked the look of the book when I was invited to take part, this is one of the things I love about these readalongs, it pushes me from my comfort zone every single time.

I really loved this book, it was so well written with a great storyline, I was reading it but it was like I was watching a movie as you could really picture everything going on and everyone in your head.

It started off as a group of friends on their usual annual holiday just enjoying themselves and possibly drinking way to much alcohol. A beautiful lady appears that isn’t part of the group and that is when things change an go really wrong. One group of friends become 2 sides of one war.

The only thing I probably didn’t enjoy was the ending, I feel it ended too abruptly and I would of liked more. However aside from that I found the book very enjoyable and a very quick read, I definitely recommend to everyone.
Read more
Helpful
Report abuse

Greggorio!
TOP 100 REVIEWER
5.0 out of 5 stars STUNNING WORLD CLASS STORY TELLING
Reviewed in Australia on 12 June 2022
Just hit the 33% mark and I know this book is worth full marks. Written with amazing “affection” for the violence of mafia-dom it’s a sophisticated take on an American sub-culture. It read a bit like classic noir but it’s way too real for that and to be honest it’s so impactful it feels like non fiction. This is the first DON WINSLOW book I have ever read but it’s destined to be the first of many.
Read more

Greggorio!
5.0 out of 5 stars STUNNING WORLD CLASS STORY TELLING
Reviewed in Australia on 12 June 2022
Just hit the 33% mark and I know this book is worth full marks. Written with amazing “affection” for the violence of mafia-dom it’s a sophisticated take on an American sub-culture. It read a bit like classic noir but it’s way too real for that and to be honest it’s so impactful it feels like non fiction. This is the first DON WINSLOW book I have ever read but it’s destined to be the first of many.
Images in this review

Miki101.Micha 🐭
5.0 out of 5 stars City on Fire - if You want to read a real Masterpiece,...
Reviewed in Italy on 4 June 2022
Verified Purchase
... here You have it right from the pen of a great Storyteller! And it's only the first of a trilogy which Don Winslow himself in several interviews declared 'his Last One'. Here he let himself inspire by Homer and his Iliad and Odyssee, and we will see in the next two books if he 'copied' by Vergil and his Aeneis, too.
Here the Greeks and Trojans are the Irish and Italian Mobsters, but this word is not openly used.
Rhode Island in 1986, the Northwest of the USA is divided by two opposing criminal syndicates. Pam, the modern Helen of Troy is dating a Moretti, but seeks a sweet connection with the opposite part, the Murphy Clan. And soon the bodies start to pile up...
The main character is Danny Ryan, married with a child on the way and soon forced into a role he never wanted. But have a brother-in-arms almost beaten to death, cannot go by without revenge. And a small flash ignites a fire which is worth that of the Fall of Ancient Troy...
But around the epic, eternal themes about family, love, honor, loyalty, hate and treachery we have to wait patiently for the release of the two following books of this Saga. The next book is called "City of Dreams" and the first chapters are there, in my Kindle eBook.
And I personally, am biting my nails!

Len
4.0 out of 5 stars A terrifically paced, sparce novel with well-rounded, believable characters
Reviewed in Canada on 22 June 2022
Verified Purchase
After having read Mr. Winslow’s “Power of the Dog” trilogy, I would have assumed I’d find this novel more predictable. That was not the case. Set on Rhode Island in the mid-1980s, the novel follows Danny Ryan, a fringe member of the Irish mob as he attempts to return peace to his community. after his handsome cousin steals the heart of the sweetheart of an Italian mobster. While the two groups had lived in peace for years, now revenge, attacks and counterattacks became the order of the day. With the retirement of the respective mob bosses, the return of peace became impossible. The novel moves at a terrific pace without unnecessary descriptions of places, extraneous characters or events or a lengthy denouement. If only more crime writers could do the same.
Read more
Report abuse

Jim T.
5.0 out of 5 stars Great author
Reviewed in Canada on 21 May 2022
Verified Purchase
Great storyteller - can't wait for the next installment!
Read more
Report abuse

JohnBlack
5.0 out of 5 stars Incredible
Reviewed in Canada on 1 May 2022
Verified Purchase
You got to get this book.
Read more
Report abuse