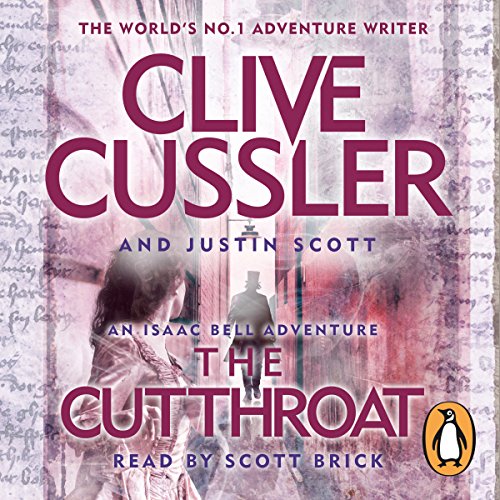 The year is 1911. Chief Investigator Isaac Bell of the Van Dorn Detective Agency has had many extraordinary cases before. But none quite like this.

Hired to find a young woman named Anna Pape who ran away from home to become an actress, Bell gets a shock when her murdered body turns up instead.

Vowing to bring the killer to justice, he begins a manhunt which leads him into increasingly more alarming territory. Anna Pape was not alone in her fate - petite young blond women like Anna are being murdered in cities across America.

And the pattern goes beyond the physical resemblance of the victims - there are disturbing familiarities about the killings themselves that send a chill through even a man as experienced with evil as Bell. If he is right about his fears, then he is on the trail of one of the greatest monsters of his time.

4.5 out of 5 stars
4.5 out of 5
1,514 global ratings
How are ratings calculated?
To calculate the overall star rating and percentage breakdown by star, we don’t use a simple average. Instead, our system considers things like how recent a review is and if the reviewer bought the item on Amazon. It also analyses reviews to verify trustworthiness.

Mike Sobyra
5.0 out of 5 stars Bell does it again. Van Dorn never quits
Reviewed in Australia on 31 August 2018
Verified Purchase
These adventures and the Fargos are the only Cussler that I still follow. The plot early on tells you who the suspects will be long before Bell works it out. So being able to reveal the killer at the end keeps up the interest. The usual Auto, Train and Airplane are evident. The one issue you have to live with in a series is the boredom caused by knowing things from other novels that are included to ensure it can stand alone.
Read more
One person found this helpful
Helpful
Report abuse

Amazon Customer
5.0 out of 5 stars Great
Reviewed in Australia on 1 May 2017
Verified Purchase
Really great I really enjoyed it it kept me enthralled from start to finish Clive cussler you have done it again thanks
Read more
Helpful
Report abuse

Richard Goninan
5.0 out of 5 stars Five Stars
Reviewed in Australia on 4 June 2017
Verified Purchase
Another great read for all Clive Cussler fans, I have read all of his books
Read more
Helpful
Report abuse

Tony H
3.0 out of 5 stars Three Stars
Reviewed in Australia on 4 May 2017
Verified Purchase
Bit too much of the same.
Read more
Helpful
Report abuse

Jason Manley
2.0 out of 5 stars Dreary, dull, disappointing
Reviewed in the United Kingdom on 13 January 2020
Verified Purchase
This is the first Cussler book I’ve ever given up on in 35 year’s of reading his novels.
When Cussler actually wrote the novels, you could rely on an easy, fun read that bounced along at a good pace.
This book has none of that.
It huffs and puffs it’s way through a dreary story with little excitement or fun.
It’s just not good enough to put the Cussler name on.
Justin Scott also wrong the last Bell novel and that was almost (but not quite) as bad. I forced myself to the end of that one.

If you want a decent novel stick with the Jack Reacher books.
At least Child’s still writes them
Read more
Report abuse

Jack
5.0 out of 5 stars Great book, shame about Kindle pricing.
Reviewed in the United Kingdom on 10 April 2018
Verified Purchase
The book itself was excellent and up to the normal Isaac Bell standards. I thoroughly enjoy reading this series. My beef is with Kindle and Amazon who upto a couple of weeks ago were charging £9.99 for this book, as they are with all the newest Clive Cussler titles, which is ridiculous given that it is an electronic copy that you don't even own at the end of the day! I bought a hardcover copy of this book in good condition for 15p (yes you read that correctly, 15 pence) plus postage so less than £3 ($4) in total. Work that one out and don't buy Kindle books at £9.99 - its a con and just greedy.
Read more
One person found this helpful
Report abuse

Liliana
2.0 out of 5 stars Not up to standard
Reviewed in the United Kingdom on 9 July 2018
Verified Purchase
I do so enjoy Clive Cussler books and have done for many years. However this book is a disappointment as it was a bit too psychological and a bit nasty.
Read more
2 people found this helpful
Report abuse

simples
5.0 out of 5 stars Stunningly good
Reviewed in the United Kingdom on 29 March 2017
Verified Purchase
As always with this series you are taken through the various scenes with a tantalisingly brief idea of what might be coming. Of course then you go off and find you had it all wrong.
The great Isaac Bell strikes again as only he can. Masterly, fun and great reading
Read more
3 people found this helpful
Report abuse

George Goatley
5.0 out of 5 stars great read
Reviewed in the United Kingdom on 14 September 2021
Verified Purchase
Another great read one of those books you can read as long as you like or pick it up as and when you have a moment as it stays with you between just love his books
Read more
Report abuse
See all reviews