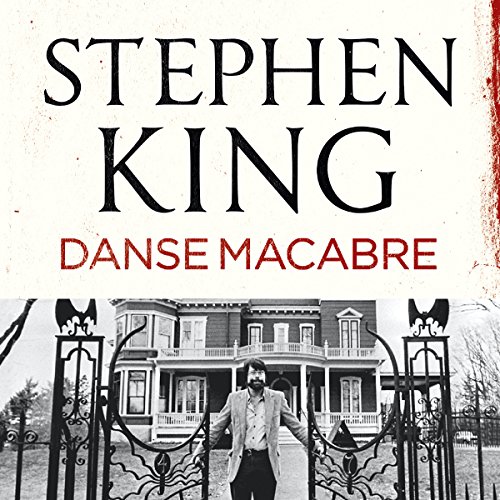 It was not long after Halloween when Stephen King received a telephone call from his editor. 'Why don't you do a book about the entire horror phenomenon as you see it? Books, movies, radio, TV, the whole thing.' The result is this unique combination of fantasy and autobiography, of classic horror writing honed to an unforgettable edge by the best-selling master of the genre.

Danse Macabre ranges across the whole spectrum of horror in popular culture, from the seminal classics of Dracula and Frankenstein. It is a charming and fascinating book, replete with pertinent anecdotes and observations, in which Stephen King describes his ideas on how horror works on many levels and how he brings it to bear on his own inimitable novels.

There is a reason why Stephen King is one of the best-selling writers in the world - ever.

4.5 out of 5 stars
4.5 out of 5
576 global ratings
How are ratings calculated?
To calculate the overall star rating and percentage breakdown by star, we don’t use a simple average. Instead, our system considers things like how recent a review is and if the reviewer bought the item on Amazon. It also analyses reviews to verify trustworthiness.

Andrea Drew
3.0 out of 5 stars Stephen King is a Writing God and I didn't like leaving three stars for this book
Reviewed in Australia on 13 April 2014
Verified Purchase
but the editing is almost non existent. I read the first thirty pages and gave up, the errors were coming thick and fast which is a shame because "On Writing" is a book I consider to be my writing bible and have read it more than three times. Stephen King is a living legend as an author but unfortunately this one would have been better left unwritten as it seemed to be an after thought. When you consider the sheer volume of fantastic work from this author, this review needs to be at least three stars for sheer writing brilliance of his other works.
Read more
Helpful
Report abuse

John M. Ford
4.0 out of 5 stars What Scares Stephen King?
Reviewed in Australia on 30 September 2014
This book, written using the author's notes from a college course he taught, explores the techniques that horror writers, filmmakers, and television producers use to scare us, entertain us, and keep us coming back for more. Along the way, King explores the horror genre from the 1950's through the 1980's and traces several key influences on his development as a horror fan, then author.

The author finds the roots of modern horror in three "tarot cards" or character archetypes, each represented by a key literary work. Our expectations about "The Vampire" were formed by Bram Stoker's  Dracula ; we see the essence of "The Werewolf" in the protagonist of Robert Lewis Stevenson's  Dr. Jekyll & Mr. Hyde ; and experience "The Thing Without a Name" as recurring versions of Mary Wollstonecraft Shelley's  Frankenstein . He traces the influence of these themes in written fiction, radio, movies, television and in popular culture.

Most interesting is King's three-level taxonomy of fear reactions. The most refined is "terror" as the suspenseful anticipation of fright which can be induced by a skilful writer with the monsters off-stage. He believes that finely-tuned terror is best achieved through books and radio because they require more active engagement by their audiences. "Horror" is secondary, as we recoil from the hidden monster as it is revealed. "Revulsion" is the lowest, most visceral reaction triggered when we are "grossed out" by slime, gore and vomit. King admits that as an author he makes unrestrained use of all three.

This book is recommended for horror fans, Stephen King fans, and all those who work to improve their writing. Readers can learn more about the author's writing style and process in his subsequent nonfiction works  On Writing: A Memoir of the Craft  and  Secret Windows: Essays and Fiction on the Crafts of Writing .
Read more
One person found this helpful
Helpful
Report abuse

Darren Ware
4.0 out of 5 stars It's dated!
Reviewed in the United Kingdom on 22 February 2022
Verified Purchase
It's dated somewhat. Their are parts that he would probably change. Wes craven comment for one.
However I will say this is up till 1980 it has given me such a get way in to other authors I didn't know and some films I didn't know, not the saucerman film so loves but many many others.
It's a great book and although I don't agree with everything he says in this book about certain people (it's ok to not and still like the person, most people have forgotten that in this day an age)I'm still enjoying the book. I have about 60 pages left but I have enjoyed hearing of a era I wasn't part of and finding alot of horror before my time in many formats. I even found the old radio shows Stephen mentions from his childhood on YouTube.
Would be really interesting if he did another one of these for the past forty years but I doubt he will.
It's nice to see the point of view from the master of horror .
Read more
Report abuse

Connor Caple
1.0 out of 5 stars Kindle edition NOT the 2012 version! Lacks the new 20 page intro. DO NOT BUY
Reviewed in the United Kingdom on 30 May 2020
Verified Purchase
The kindle edition is not the new one as advertised. It is the original edition without the new intro by Stephen King summing up the new Horror since the original publication. Don't waste your money if, like me, you have the original paperback.
Read more
3 people found this helpful
Report abuse

Amazon Customer
4.0 out of 5 stars Danse Macabre review
Reviewed in the United Kingdom on 24 November 2017
Verified Purchase
I read this novel nearly 30 years ago and re read it again recently. It covers the period of horror from 1950-1980. The best section is his detailed review of 10 fine horror novels and a list of 100 or so “must read” horror novels. King was 33 when this was published and comes across as brusque, today he is much mellower. 4 stars, but it’s dated, when published 1980 was the present day.
Read more
4 people found this helpful
Report abuse

charlie k
4.0 out of 5 stars Interesting
Reviewed in the United Kingdom on 7 March 2015
Verified Purchase
I'm a huge fan of Stephen King and I initially was skeptical about reading but the book wore on me. It's more of a treatise on the horror genre in general but it is written in his witty style which helps. I especially like the appendices of books and films which for me meant giving this book an extra star
Read more
2 people found this helpful
Report abuse

ken tilston Tillo
5.0 out of 5 stars Horrow all the way
Reviewed in the United Kingdom on 24 October 2020
Verified Purchase
What a read excellent
Read more
Report abuse
See all reviews