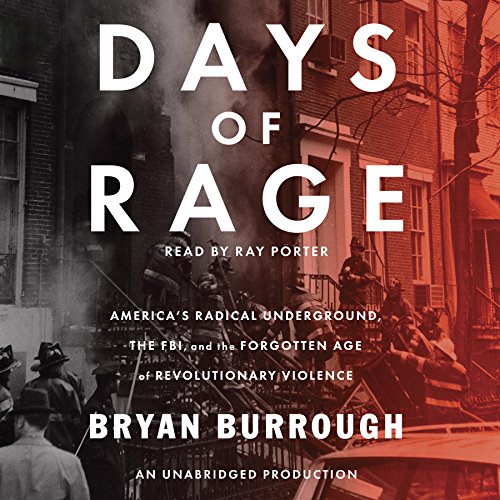 Days of Rage: America's Radical Underground, the FBI, and the Forgotten Age of Revolutionary Violence

4.5 out of 5 stars
4.5 out of 5
238 global ratings
How are ratings calculated?
To calculate the overall star rating and percentage breakdown by star, we don’t use a simple average. Instead, our system considers things like how recent a review is and if the reviewer bought the item on Amazon. It also analyses reviews to verify trustworthiness.

Saffron Leander
4.0 out of 5 stars Burrough doesn't romanticize these people like many an ex-hippie pushing a radical agenda
Reviewed in Canada on 19 August 2016
Verified Purchase
I know that some people have mentioned that this book lacks flair, and adhered too much to facts at the expense of critical analysis. I think, this might be slightly true, but I don't think that it detracts from the book. Rather, Days of Rage avoids many of the weaknesses that have plagued other works about this particular period.

Burrough doesn't romanticize these people like many an ex-hippie pushing a radical agenda. He is clear-sighted about the nature of the radical underground, which seems to be created by equal parts narcissism, violence, idealism, self-indulgence and legitimate grievances. He clearly distinguishes the radical underground from mainstream Sixties counterculture. And while underground groups depended on support from above ground supporters, this support dried up after a few years, leaving groups to rely largely on robbery and fraud to support their campaigns of small scale bombings and occasional shootings.

A fascinating portrayal of a movement that has largely become a historical footnote. Burrough brings his account of domestic terrorism and life on the run to life by interviewing G-men, ex-radicals, cops, radical lawyers, family members to give a gloriously detailed account of a time not unlike our own.
Read more
One person found this helpful
Report abuse
See all reviews
Back to top
Get to Know Us
Make Money with Us
Let Us Help You
And don't forget:
© 1996-2021, Amazon.com, Inc. or its affiliates