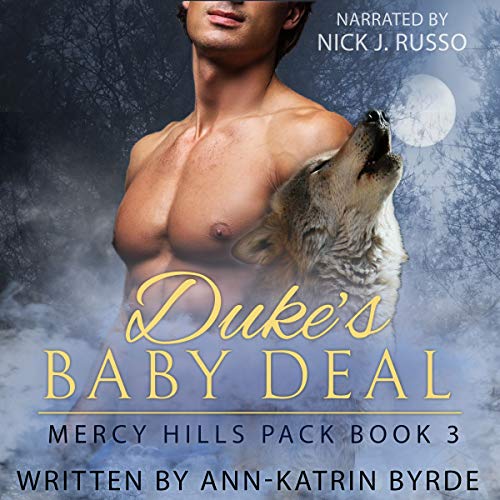 4.3 out of 5 stars
4.3 out of 5
50 global ratings
How are ratings calculated?
To calculate the overall star rating and percentage breakdown by star, we don’t use a simple average. Instead, our system considers things like how recent a review is and if the reviewer bought the item on Amazon. It also analyses reviews to verify trustworthiness.

Wide Eyes, Big Ears!
TOP 500 REVIEWER
3.0 out of 5 stars Absorbing but not my fave in this series
Reviewed in Australia on 3 December 2020
In the caring safety of the Mercy Hills pack, Bram has had his pick of suitors, which has left him vain and careless. When Bram’s pride leads to a fall, Duke steps up to save the day. While I felt for Bram as he suddenly had to grow up fast, I didn’t really warm to him - I felt he was still making immature decisions by the end of the story. Some readers will love these books for the MPREG, some for the shifter world, and some for minority rights themes - I felt like the pregnancy far outweighed the other storylines in this book and I would have preferred more of a balance. That being said, I was still absorbed by the overall story and I thought Duke was a saint! 🎧 Nick J Russo gave his usual excellent narrative performance.
Read more
Helpful
Report abuse

SamhainSylph
5.0 out of 5 stars Ann-Katrin Byrde is brilliant at writing both alpha and omega characters that are ...
Reviewed in Australia on 18 April 2017
This is the second book I've read in this series. You don't need to read them all in order, although that might give you a clear, linear backstory to surrounding characters and conditions. Ann-Katrin Byrde is brilliant at writing both alpha and omega characters that are complex, real, interesting and attractive- not just physically, but personality-wise. It's really interesting to enter the world she has created, where shifters live in enclaves separate from human society, and only travel out into the human world under certain conditions and limits. The limits, beliefs and prejudices within the shifter society itself also form an interesting part of what makes this world a complicated place to live in, particularly for omegas (who are not too common, coveted, but also undermined, even in places with good intentions). Duke, the alpha in this story is a wonderfully attractive alpha- very open, accepting, loving and supportive of his omega. And Bram is a character stifled by his parents and even by the society that simultaneously has lent him more freedoms than omegas are given elsewhere. He's a character many of us will easily identify with, as his situation mirrors that of strict parents with their growing teens. I loved reading about their relationship.
Read more
Helpful
Report abuse
See all reviews

Amazon Customer
5.0 out of 5 stars Five Stars
Reviewed in the United Kingdom on 23 June 2017
Verified Purchase
A great read have all the series so far can't wait for the next
Read more
Report abuse

Desi
5.0 out of 5 stars Wonderful story
Reviewed in Germany on 11 July 2017
Verified Purchase
The third part of the Mercy Hills saga is the story of Bram and Duke.

Omega Bram knows what he wants, he wants adventure, he wants to learn. And he does not want to spend his life as a "housewife".

His love belongs to Duke, but he does not know how to handle it. A visitor to the pack abuses Bram's confidence and suddenly he is in a difficult position.
Duke is his savior in need, but it will be very hard times for both. They have many problems, their relationship is not the same as the circumstances they both would wish for
Read more
One person found this helpful
Report abuse

Kindle Customer
5.0 out of 5 stars Great Series...Can't wait for more!
Reviewed in Canada on 29 November 2017
Verified Purchase
This was a great book. I adore Duke now, what a sweetie. Great characters and Love, love, love this series! Can't wait for more. Thank you very much, Ann-Katrin Byrde for writing this series. I love your Alphas and especially the amazing Omegas. Beautiful love stories and hot sex, who could ask for more!
Read more
Report abuse

Vladda
5.0 out of 5 stars Nice
Reviewed in Germany on 25 May 2021
Verified Purchase
A good story that fits good together with the other books. Audio book is nice too. Looking forward to the next.
Read more
Report abuse

Darcy Thornton
5.0 out of 5 stars Terrific addition to the series
Reviewed in the United States on 15 October 2016
Verified Purchase
I am so into this Alpha/Omega-verse created by AKB. Each book in the series has built up this world and present a different look from within. The Omegas, some might say, are a bunch of chicks with di--- well, you know, but I've bought the farm on these stories and it doesn't matter to me one bit. I'm very excited that two more books, at least, are in the works for the series.

This story features Duke and Bram. They're both pining for the other, not realizing that the attraction is very mutual. Unfortunately, Bram finds himself in quite a pickle. Lucky for him, Duke is not a typical Alpha and comes to his rescue.

The culture is well drawn in all the books, from the lovely wedding ceremonies to the plight of the Omegas and their utter lack of status as beings in their own right. While the previous books elaborate on the second class citizen status of the Omegas and how they fit into various packs, Mercy Hills being far and away the most progressive and fair of the bunch, this book expands further on how the Wolves themselves fair among the humans. Ironically, the Omegas' lack of rights among the packs is mirrored similarly by the Wolves' lack of rights among the humans.

Bram and Duke are in need of venturing beyond the walls and interacting with humans. It's frustrating and heartbreaking at times how they're treated by bigoted humans. They also form positive interactions to counteract the bad seeds. The whole book isn't spent among the humans, but there is more in this book than in the previous brief glimpses. I find it all fascinating. AKB has done a wonderful job of making a comprehensive universe of Alphas, Omegas, and humans, with many different layers and rich culture.

Duke is a humble Alpha with a generous heart, and Bram, while young (!!) and immature at times, grows into his own and well appreciates and loves Duke as he deserves. They're good for each other and I look forward to seeing them in future books, as all of the couples have made appearances in each other's books in the series.

I like the writing style and the "voices" of the characters. There are maybe a handful of minor editing issues that caught my eye, but no biggies.

The worst thing about these books is waiting for the next one to be released. So. Impatient.

Read in order.
Read more
7 people found this helpful
Report abuse
See all reviews
Back to top
Get to Know Us
Make Money with Us
Let Us Help You
And don't forget:
© 1996-2021, Amazon.com, Inc. or its affiliates