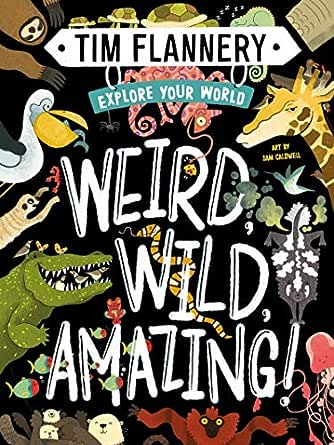 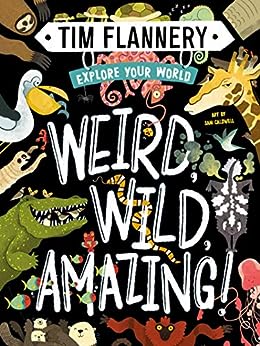 Releases February 16, 2021. Pre-order How to Avoid a Climate Disaster now with Pre-order Price Guarantee.
If the Amazon.com.au price decreases between your order time and the end of the day of the release date, you'll receive the lowest price. Order now

'The popular naturalist reaches for a younger audience with a mix of basic and oddball facts about more than 50 wild creatures.

With much reference to “poo and goo,” Flannery ratchets down his usual level of discourse to focus on essentials: the “weaponized vomit” of turkey vultures, for instance, “Snot Studies,” and anatomical insights such as the special help that tree kangaroos get from masses of stomach worms in digesting their food. The entries, loosely organized by habitat, each also offer observations on geographical range, typical diet, distinctive physical features, and, often, challenges posed by climate or environmental change. Along with an autobiographical introduction and personal notes about encounters with some of his wild subjects, the author tucks in glances at broad topics such as evolution, extinction, and scientific nomenclature too. Caldwell goes mostly for splashes of bright color and silly riffs in his illustrations, so naturalistic detail takes a back seat to a male blue whale in a lounge singer’s dress, courting scorpion and seahorse couples in ballroom garb, and like follies. Readers who relish learning about a tree-climbing turtle or how moths “love pretending to be things they’re not, like hornets or eyeballs or lumps of poop,” will be well rewarded.

--This text refers to the hardcover edition.

Professor Tim Flannery is one of the world’s leading scientists, explorers and conservationists. He’s spent most of his life studying the natural world – from mammalogy to palaeontology – and has had some incredible adventures along the way, including floating down crocodile-infested rivers and wrestling pythons. He’s discovered 75 new species of animals – some that are still living, and others that have been preserved as fossils. He’s worked at museums and universities in Australia and around the world, including as Director of the South Australian Museum, Visiting Chair in Australian Studies at Harvard University and Distinguished Visiting Fellow at the Australian Museum. He established and co-chaired the Copenhagen Climate Council, was appointed Australia’s first Climate Commissioner and is the Founder and Chief Councillor of the Australian Climate Council. In 2007, he was named Australian of the Year. He has published over 140 peer-reviewed scientific papers and more than thirty books, including the award-winning Here on Earth (2010), Atmosphere of Hope (2015) and The Weather Makers (2005), which has been translated into over 20 languages. His books for children include the best-selling Explore Your World: Weird Wild, Amazing! and Explore Your World: Deep Dive into Deep Sea.

Sam Caldwell has a particular talent for illustrating the world’s strangest and most fascinating creatures. He grew up in the north of England and now lives in Glasgow, Scotland, where he works as an illustrator and designer. Sam studied painting at the Edinburgh College of Art and is passionate about using texture and colour to tell stories with his art. His illustrations are regularly featured in magazines and newspapers, including The Guardian, The Independent and The Sydney Morning Herald, and his books for children include Sneaky Shadows by SC Manchild, and Tim Flannery's Explore Your World series, including Weird Wild, Amazing! and Deep Dive into Deep Sea. --This text refers to the hardcover edition.

4.2 out of 5 stars
4.2 out of 5
3 global ratings
How are ratings calculated?
To calculate the overall star rating and percentage breakdown by star, we don’t use a simple average. Instead, our system considers things like how recent a review is and if the reviewer bought the item on Amazon. It also analyses reviews to verify trustworthiness.

There are 0 customer reviews and 3 customer ratings.
Get FREE delivery with Amazon Prime
Prime members enjoy FREE Delivery and exclusive access to movies, TV shows, music, Kindle e-books, Twitch Prime, and more.
> Get Started
Back to top
Get to Know Us
Make Money with Us
Let Us Help You
And don't forget:
© 1996-2020, Amazon.com, Inc. or its affiliates