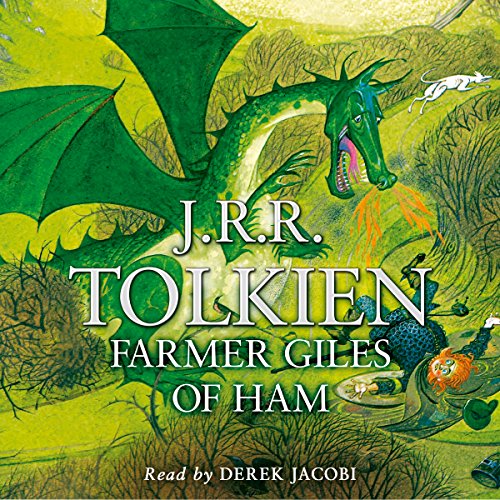 Derek Jacobi (Narrator), J. R. R. Tolkien (Author), HarperCollins Publishers Limited (Publisher) & 0 more
4.8 out of 5 stars 141 ratings
See all formats and editions
Sorry, there was a problem loading this page. Try again.
Farmer Giles of Ham is one of Tolkien's most popular stories, full of wit and humour, set in the days when giants and dragons walked the earth. He did not look like a hero. He was fat and red-bearded and enjoyed a slow, comfortable life. Then one day a rather deaf and short-sighted giant blundered on to his land. More by luck than skill, Farmer Giles managed to scare him away. The people of the village cheered: Farmer Giles was a hero. His reputation spread far and wide across the kingdom. So it was natural that when the dragon Chrysophylax visited the area it was Farmer Giles who was expected to do battle with it!
Read more
©1949 The J.R.R. Tolkien Copyright Trust (P)1999 HarperCollins UK
Previous page
Next page
Learn more about membership
By completing your purchase, you agree to Audible’s Conditions Of Use and Privacy Notice.
Sold and delivered by Audible, an Amazon company

4.8 out of 5 stars
4.8 out of 5
141 global ratings
How are ratings calculated?
To calculate the overall star rating and percentage breakdown by star, we don’t use a simple average. Instead, our system considers things like how recent a review is and if the reviewer bought the item on Amazon. It also analyses reviews to verify trustworthiness.

E. A. Solinas
TOP 100 REVIEWER
4.0 out of 5 stars In the vulgar tongue
Reviewed in Australia on 27 February 2018
In addition to his epic "Lord of the Rings" and the surrounding mythology, JRR Tolkien wrote a lot of brief, often light little fantasy novellas.

And if "Lord of the Rings" is a seven-course meal, "Farmer Giles of Ham" (in the vulgar tongue) is a pleasant little hors-d'oeuvre whose flavour lingers on the tongue. Tolkien wrote this in a charming, arch style, and seems to have had fun subverting some of the fantasy cliches that he helped create -- particularly that of the dragonslaying hero and the dragon he must deal with.

Aegidius de Hammo (or in the "vulgar tongue," as Tolkien archly tells us, Farmer Giles of Ham) is a pleasant, not-too-bright farmer (a bit like Barliman Butterbur) who leads a fairly happy, sedate life. Until the day his excitable dog Garm warns him that a giant (deaf and very near-sighted) is stomping through and causing mayhem. Giles takes out his blunderbuss and takes a shot at the giant, and inadverantly drives him off.

Naturally, Giles is hailed as a hero. Even the King is impressed, and sends him the sword Caudimordax (vulgar name: Tailbiter), which belonged to a dragonslaying hero. By chance, the not-so-fierce dragon Chrysophylax Dives has started pillaging, destroying and attacking the nearby areas. Can a not-so-heroic farmer drive off a not-so-frightening dragon?

"Farmer Giles of Ham" is one of those Tolkien stories that seems to be aimed at very literate kids, or adults who haven't lost that taste for very British, arch whimsy. It's a fast, fun little adventure story with blundering giants, greedy dragons and unlikely heroes. It's not epic and it's not deep, but it is entertaining -- especially since Tolkien expertly blends the whole high fantasy thing with a wicked sense of humour ("if it is your notion to go dragonhunting jingling and dingling like Canterbury Bells, it ain't mine").

Particularly, Tolkien seems to be gently mocking medieval fables, both as a linguist (the "vulgar tongue" comments) and as a storyteller (he young dragons exclaiming that they always knew "knights were mythical!"). Most particularly, he seems to be mocking the classic heroes who slay dragons or giants, mainly by making both heroes and monsters not quite as threatening as expected. He inserts plenty of humorous anachronisms (the blunderbuss) and clever in-jokes (Caudimordax, a sword which is incapable of being sheathed if a dragon is within five miles of it).

Farmer Giles is a pretty fun character -- he's presented as a fairly ordinary, common-sensical person called upon to do some bizarre and extraordinary things... so, basically a typical Tolkien hero, although he has a talking dog that keeps causing trouble for him. His enemy Chrysophylax is in a sense his opposite, being " cunning, inquisitive, greedy, well-armoured, but not over bold." He's kind of like a funny version of Smaug, minus the destruction of cities.

Amazon Customer
5.0 out of 5 stars Small format, but many extras.
Reviewed in the United Kingdom on 4 March 2016
Verified Purchase
I've always loved Farmer Giles of Ham, both as a basic story and a series of elaborate intellectual jokes by a man deeply into ancient languages.
I intended to read it to my grandsons, and was shocked to realise that I could not find my original copy. Buying this edition was a necessity, and to be honest, I would have preferred a facsimile of the original edition.
This edition is in a very small format and does not have al the original illustrations- though it does have some extra ones as well as earlier versions of the story and a comprehensive commentary.
If you like Tolkien's style, and you remember your Latin, this is perfect.
Read more
Report abuse

Cardi
5.0 out of 5 stars Lovely edition
Reviewed in the United Kingdom on 21 November 2021
Verified Purchase
The book itself is genius and always has been. This pocket edition feels great and has very good illustrations. Another young mind is being introduced to Tolkein - and I got a "Ooo I saw that at school. My teacher read it to us.'
Read more
Report abuse