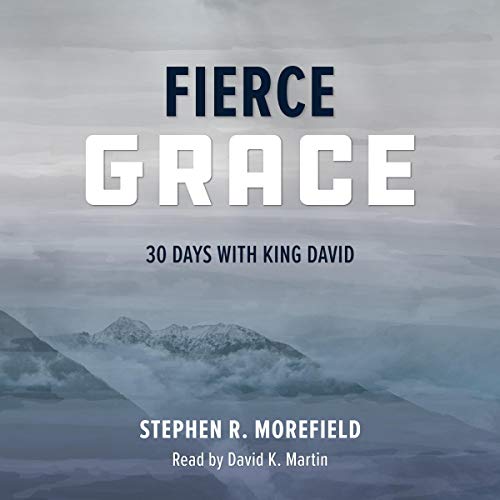 King David and his people lived broken, messy, and yet meaningful lives. Just like you.

In these 30 stories from 1 & 2 Samuel, Stephen Morefield explores the life of King David through the eyes of God's people. Both disappointment and hope will be found. And, while King David can't give us everything we need, he will point clearly to the One who can.

“Like most church kids, I grew up believing the Bible was a book full of heroes to emulate, and David stood tall above them all. The older I got, the less heroic the heroes looked. They had seeds of greatness buried in the clay of sin. How could it grow? When would the harvest come? Why do we have these stories of men who seemed great, but instead were greatly broken? Pastor Stephen’s meditations shine a clear light on King David’s life. After you read this, you’ll know yourself, David, and the Only True Hero more deeply. David’s life offers us many lessons to live in this truth: there is only one pathway to genuine transformation.” (Mike Wright, pastor, Littleton Christian Church, Littleton, CO; moderator, Evangelical Presbyterian Church Presbytery of the West)

“For two consecutive summers our church lived in the books of 1 and 2 Samuel as we preached through them each Sunday. They were rich sermons, but in many ways they were also jarring sermons, for both the one in the pulpit and those in the pews. We saw heroes with warts as big as their noses and a king whose relationship with God was a rollercoaster - faithful now unfaithful, rejoicing now crushed, wise now fool-ish. Yet behind these ups and downs, we also saw what God wants us to see: the constancy of his grace. I wish Stephen’s book - with his relentless focus on the true Hero - were published sooner so I could have shared it with our congregation.” (Benjamin Vrbicek, teaching pastor, Community Evangelical Free Church; coauthor of More People to Love and Don't Just Send a Resume: How to Find the Right Job in a Local Church)

Read more
©2018 Stephen R. Morefield (P)2019 Stephen R. Morefield
Previous page
Next page
Learn more about membership
By completing your purchase, you agree to Audible’s Conditions Of Use and Privacy Notice.
Sold and delivered by Audible, an Amazon company

5.0 out of 5 stars
5 out of 5
1 global rating
How are ratings calculated?
To calculate the overall star rating and percentage breakdown by star, we don’t use a simple average. Instead, our system considers things like how recent a review is and if the reviewer bought the item on Amazon. It also analyses reviews to verify trustworthiness.

There are 0 customer reviews and 1 customer rating.