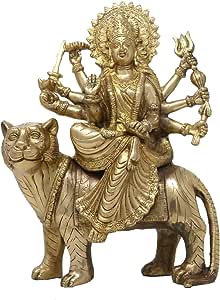 Brand: Shalinindia
Secure transaction
Returns Policy
Your transaction is secure
We work hard to protect your security and privacy. Our payment security system encrypts your information during transmission. We don’t share your credit card details with third-party sellers, and we don’t sell your information to others. Learn more

While the Hindu pantheon includes many deities, some are especially revered among followers of the faith. The goddess Shakti is one such deity. Also known by the name Devi, this goddess destroyed a demon named Durgamaasura and was then known as Durga. In this form, she is often worshiped both in temples and in homes. The Handmade Brass Durga Devi Hindu Goddess Statue was made specifically for use for religious practice and is of fine enough quality to earn a place at the temple but also affordable enough to be a practical choice for a home altar.

The Handmade Brass Durga Devi Hindu Goddess Statue shows Durga in the traditional way, seated cross legged on the back of a lion. She is holding her usual items, the conch shell, the trident, the sword and the bow. The statue features an elaborately detailed base, and it is constructed entirely out of brass, giving it a luxurious gold color.

The beauty of this statue makes it an ideal decorative statue for those who do not subscribe to the Hindu faith but wish to bring some Indian culture to their decor.

Unlike other Hindu statues, the Handmade Brass Durga Devi Hindu Goddess Statue is not mass produced. Instead, each statue is made the traditional way with a sand casting technique. Skilled metalworkers from Muradabad in North Indiacomplete every step of the process, working diligently to ensure that each statue produced is truly flawless.

Complete the altar at your temple or in your home with an exquisitely crafted statue that bears reverence to Durga in the most beautiful of ways. Order the Handmade Brass Durga Devi Hindu Goddess Statue now.

Get FREE delivery with Amazon Prime
Prime members enjoy FREE Delivery and exclusive access to movies, TV shows, music, Kindle e-books, Twitch Prime, and more.
> Get Started
Back to top
Get to Know Us
Make Money with Us
Let Us Help You
And don't forget:
© 1996-2020, Amazon.com, Inc. or its affiliates