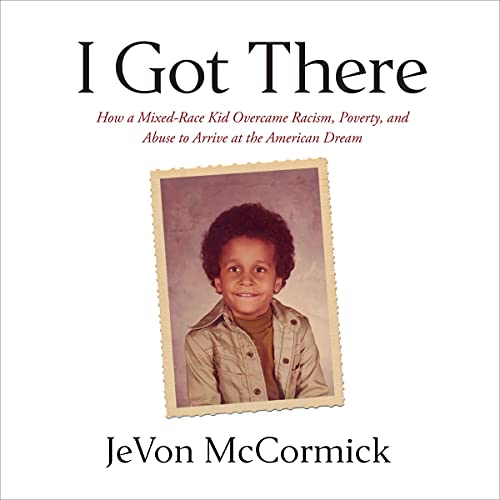 I Got There: How a Mixed-Race Kid Overcame Racism, Poverty, and Abuse to Arrive at the American Dream

He was born the mixed-race son of a negligent, drug-dealing pimp father and a struggling single mother. He was raised in the slums of Dayton, Ohio, suffered incredible abuse and racism, and had multiple stints in the juvenile justice system. He barely graduated high school and has no college degree.

No one expected him to succeed. But succeed he did.

Starting out by scrubbing toilets, JT hustled and worked his way into better opportunities, eventually finding incredible success in the mortgage industry. He was on top of the world.

And then it all fell apart. He lost his job and his money.

Gripping, heartbreaking, enlightening, and ultimately uplifting, I Got There proves that no obstacle is too difficult to conquer - and that the game can be won by anyone, from anywhere.

4.6 out of 5 stars
4.6 out of 5
70 global ratings
How are ratings calculated?
To calculate the overall star rating and percentage breakdown by star, we don’t use a simple average. Instead, our system considers things like how recent a review is and if the reviewer bought the item on Amazon. It also analyses reviews to verify trustworthiness.

Miguel A. Kieling
5.0 out of 5 stars Amazing story
Reviewed in Brazil on 1 January 2021
Verified Purchase
Really raw and inspiring story. Having had humble beginnings myself I identified with many of the struggles JT had. Thoroughly enjoyed this book. Thank you for writing it!
Read more
Report abuse

Lovemybooks
1.0 out of 5 stars Another boring diatribe from a CEO
Reviewed in the United States on 26 February 2022
Verified Purchase
If you are looking for yet another story of rags to riches with healthy doses of self-aggrandizing then this is the book for you. I found the author's story of growing up impoverished and bi-racial to be perfunctory and trivial. For those looking at inspiring stories of overcoming odds, there are thousands of better choices.

While the author talks in detail about his life of oppression, he does not write enough about the current position he is in. I wanted to learn more about how he managed to become president of Scribe and not read 90 percent of the content that seemed to drag on about how bad his early life was. It's too bad because as a bi-racial professional, I had hoped for far more.
Read more
One person found this helpful
Report abuse

Colleen Coll
5.0 out of 5 stars An Emotional, Inspirational Success Story (without the bull)!
Reviewed in the United States on 19 March 2017
Verified Purchase
Not a fan of self help books. Tony Robbins will NEVER inspire me to walk on hot coals to “think and grow rich.” To me, the American dream seems to only bless just a lucky, selected few to make us regular folks believe we can find the “the secret” to success.

I’m still having trouble believing that anyone can survive what he experienced as a kid and lived to tell it in this wonderfully written, modern-day Dickens tale.

Growing up poor as dirt, abused, neglected and literally nowhere to turn is the sad, despairing setting within the first half of the book. And, because you know he is still alive and had the audacity to become a multi millionaire, you can’t fight the urge to find out what happened next nor put the book down. But, take note, you’ll need a few seconds to pause and ask “wait…What? Why? How?”

The book credibly compliments the strengths of Mr. McCormick’s character. He always makes a conscious effort to say hello to everyone (thank to a bittersweet moment with his dad) and showers the women who clean his office with grand gestures of appreciation. He takes pride in being the best damn toilet cleaner in the universe. And, he hustles like no other to go that extra mile, breaking records as a salesman. However, what makes this story more compelling is the poignant view of his weaknesses. His success as a salesman involved selling products and services to those unable to afford them and just as poor as he was growing up. Also, despite his amazing drive to be the best of the best, he somehow lost a buttload of money (and pride) in the housing market crash leaving him nearly poor a second time. The most gripping part within the book (and also very climactic) is the daunting guilt he shares of an unfortunate childhood memory of his younger half sister.

Mr. McCormick’s journey is a success story that doesn’t rely on promoting a set of rules to abide by to become a millionaire mogul. His success is that, although the memories still haunt him, he lived to tell. AND, the true happy ending is his continued passion to mentor and help others at risk. Priceless.
Read more
12 people found this helpful
Report abuse

Shertzaik
5.0 out of 5 stars This book will change your outlook on life
Reviewed in the United States on 28 November 2017
Verified Purchase
I heard JT McCormack on a podcast and was just blown away. This guy had every reason to give up on life and end up in the prison system. One thing I think about all the time is the hand we are dealt at birth and how people navigate through life based on this start. Whether you are born in a third world country or in extreme poverty like JT, will these people be given a pass in the end (whatever your God is or may be)? The two big takeaways for me 1) Be appreciative of what you have every day 2) work your ass off to reach your goals. The first takeaway is hard for me...I was given a great start with great parents, education, and all my needs and wants met. I've been learning though to appreciate things for by reading books like this. The second takeaway, I am going to work even harder because there are JT's out there who are out working me and I need to always keep that in mind. Every day is a day to learn and grow. Get this book, it will change your outlook.
Read more
5 people found this helpful
Report abuse
See all reviews