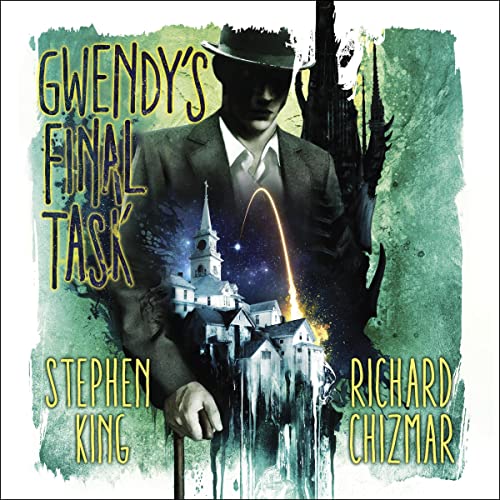 King and Chizmar join forces again with a powerful novel that is also the final chapter in the Gwendy trilogy.

When Gwendy Peterson was 12, a stranger named Richard Farris gave her a mysterious box for safekeeping. It offered treats and vintage coins, but it was dangerous. Pushing any of its seven coloured buttons promised death and destruction.

Years later, the button box re-entered Gwendy's life. A successful novelist and a rising political star, she was once more forced to deal with the temptations that the box represented - an amazing sense of well-being, balanced by a terrifyingly dark urge towards disaster.

With the passing of time, the box has grown ever stronger and evil forces are striving to possess it. Once again, it is up to Gwendy Peterson, now a United States senator battling the early symptoms of Alzheimer's disease, to keep it from them. At all costs. But where can you hide something from such powerful entities?

Gwendy's Final Task is a wildly suspenseful and at the same time deeply moving novel in which 'horror giants' (Publishers Weekly) Stephen King and Richard Chizmar take us on a journey from Castle Rock to another famous cursed Maine city to the MF-1 space station, where Gwendy must execute a secret mission to save the world. And, maybe, all worlds.

Switch between reading the Kindle book & listening to the Audible narration with Whispersync for Voice.
Get the Audible audiobook for the reduced price of $9.99 after you buy the Kindle book.
Final days - Don't miss out!
Learn more about membership
By completing your purchase, you agree to Audible’s Conditions Of Use and Privacy Notice.
Sold and delivered by Audible, an Amazon company

4.6 out of 5 stars
4.6 out of 5
3,624 global ratings
How are ratings calculated?
To calculate the overall star rating and percentage breakdown by star, we don’t use a simple average. Instead, our system considers things like how recent a review is and if the reviewer bought the item on Amazon. It also analyses reviews to verify trustworthiness.

cyberalchemist
2.0 out of 5 stars review of production not story
Reviewed in Australia on 10 March 2022
Verified Purchase
Cemetery Dance books are usually well made with sewn bindings, that will last through repeated reads. The copy I bought from Amazon was like a print on demand copy. It was "perfect bound" ie glued, like a paper back, in pretty crude boards.

CD claim there are two "first editions", probably the one that looks like a normal CD book, and one like the one I bought. So If you are going to buy a copy, it might pay you to check it first.

Dipper
5.0 out of 5 stars Gwendy’s Final Task and the linkages
Reviewed in Australia on 21 April 2022
Verified Purchase
There are a few of SK’s books that have brought me to tears, this one was no exception. Avid King readers will recognise the pointers to the low men, the Crimson King and the Tower and others might scoff at the apparent confluences linking them with IT and the other Derry stories.

Not me. Beautifully crafted with believable characters and a relevance to current times, this could almost be King’s piece de résistance. I do so hope it’s not.

There are so many other worlds than this.
Read more
Helpful
Report abuse

Tc
5.0 out of 5 stars An superb story.
Reviewed in Australia on 28 February 2022
Verified Purchase
Make sure you read all of this series. The story flows from book to book. And it really is a pleasure to read.
Read more
Helpful
Report abuse

Christopher Stokes
5.0 out of 5 stars One last hurrah!
Reviewed in the United Kingdom on 17 February 2022
Verified Purchase
I think it's safe to say that I enoyed this novel immensely. I hurtled through it at a speed of 2600mph, which just so happens to be how fast Gwendy Peterson hurtles into her final adventure in this 'wild ride' of a trilogy. Gwendy's final outing is this time set in space, which sees the protagonist battling more than one demon along the way. The man in the black hat has given her one final task, and that is to make sure that the button box never again gets into the hands of anyone who can be tempted by its treats or its devastating 'Cancer button'. This novel is fast paced and keeps you wanting more. Page after page I kept on reading, never once feeling like I wanted to put it down. Not only does this novel deal with Gwendy's universe saving mission, it also deals with her mental state, which is slowly declining as she enters this last phase. The story deals with her condition well, and without giving too much away I think they gave the character the send off she deserves. Gwendy's final task neatly ties everything in a bow and brings some unanswered questions to a close, while leaving some new ones open to exploration. This novel also touches upon some of King's earlier works, which puts a smile on the faces of constant readers. I especially enjoyed the references to the dark tower, and as you will soon come to find out by reading this suspense driven journey through space... 'there are other worlds than these'. 5*
Read more
3 people found this helpful
Report abuse

Kindle Customer
1.0 out of 5 stars Very disappointing
Reviewed in the United Kingdom on 19 February 2022
Verified Purchase
Purchased this on release day and was really keen to find out what happens to Gwendy and the box.The storyline was just utter rubbish,completely unbelievable and unlike with most other King books I could not get immersed in the book,it almost feels like the writers got bored and rushed this through without reconsideration for the readers I would not recommend the books based on this one and could not understand the positive reviews.
I would have given this no stars if it was an option
Read more
4 people found this helpful
Report abuse

Vala
5.0 out of 5 stars It was a pleasure to get to know you, Gwendy!
Reviewed in the United Kingdom on 15 February 2022
Verified Purchase
I loved following Gwendy’s life in the Button Box Trilogy - from a curious teenager, to an accomplished writer and politician, and finally to a 64-year-old senator who tries to save the world. I enjoyed every part of the three books and how Gwendy‘s life took a turn every time the button box made it’s appearance.

If you have read Gwendy‘s Button Box and Gwendy’s Magic Feather (and please do before purchasing and reading this part) you will not want to miss her last adventure! I truly enjoyed the cooperation between King and Chizmar and how true life events and people are incorporated especially in this last part of the trilogy - in a way you would almost believe it.

Full 5 Stars from my side and a full recommendation for all 3 parts of the story - a cooperation between two authors at its best!
Read more
2 people found this helpful
Report abuse

Graham G Grant
4.0 out of 5 stars Gwendy’s sci-fi swan song
Reviewed in the United Kingdom on 20 February 2022
Verified Purchase
The final instalment of Gwendy’s remarkable adventures is in some ways the most satisfying, certainly more so than the second book, which didn’t quite live up to my expectations. The first one was tantalising and derived much of its charm from unanswered questions. Some of these at least are addressed in the Final Task, which moves the action to outer space. Gwendy is determined to get rid of the box that has defined the course of her life. By now she’s a senator, and developing dementia. There are crossovers with other King novels, both horror and fantasy, without giving too much away. You might feel some of the power and charm of the original is lost by the back story that’s slowly filled out in Final Task — but it’s done with a light touch as always, and the reader isn’t overburdened by needless explanation. It will only make any kind of sense to those well-versed in Kingology, or those who research it. And even then not everything is explained… It hangs together well — despite the sheer outlandishness, or maybe because of it. Some of the intertextual links may be a bit confected or ‘on the nose’, but they worked for me. This is a solid and satisfying climax to a clever and absorbing trilogy.
Read more
One person found this helpful
Report abuse

R.O. P
5.0 out of 5 stars A lighter side of King
Reviewed in the United Kingdom on 16 April 2022
Verified Purchase
I found this conclusion of The King /Schizman trilogy of novellas imaginative, fresh and compulsive . Gwendys Final Task following, the other two books Button Box and Magic Feather, was a welcome inspiration for me at a troubling time in my life ! A light read based predominantly around Kings Castle Rock Maine. We follow heroin Gwendy from childhood through to nearly six decades of her life, from , when as a girl she meets a mysterious stranger, who gives her the button box, which is magical!
Political and world events of fiction and reality are included in the trilogy, from The Guyana Jonestown mass suicide, To Trumps rise to the Whitehouse.
I found the whole Button box experience catchy and could not stop reading, instantly on to the next book. completing all three in 3 weeks. For Final Task this is the conclusion of the journey of the successful East Coast Gwendyn , and the fate of the powerful Button box! For Final Task the career climbing Gwendy makes it as, a Democratic Senator, who takes to space exploration. For King master of horror there's no horror , but a lot of psychological , and fantasy activities, and just a couple of bumps in the night. Read Gwendys Button Box and Gwendys Magic Feather , before Final Task. It will be hard to be disappointed with this book, however this is much of a lighter King read more associated to Dolores Clairborne than Pet Cemetery.
Read more
Report abuse
See all reviews