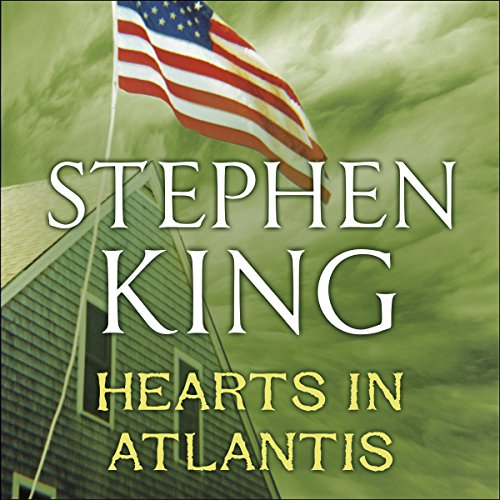 William Hurt (Narrator), Stephen King (Author), Hodder Headline Limited (Publisher) & 0 more
4.5 out of 5 stars 145 ratings
See all formats and editions
Sorry, there was a problem loading this page. Try again.
Hearts in Atlantis is composed of five interconnected, sequential narratives, set in the years from 1960 to 1999. Each story is deeply rooted in the sixties, and each is haunted by the Vietnam War.

In Part One, "Low Men in Yellow Coats", 11-year-old Bobby Garfield discovers a world of predatory malice in his own neighbourhood. He also discovers that adults are sometimes not rescuers, but at the heart of the terror.

In the title story, a group of college students get hooked on a card game, discover the possibility of protest...and confront their own collective heart of darkness, where laughter may be no more than the thinly disguised cry of the beast.

In "Blind Willie" and "Why We're in Vietnam", two men who grew up with Bobby in suburban Connecticut try to fill the emptiness of the post-Vietnam era in an America which sometimes seems as hollow -- and as haunted -- as their own lives.

And in "Heavenly Shades of Night Are Falling", this remarkable book's denouement, Bobby returns to his hometown where one final secret, the hope of redemption, and his heart's desire may await him.

Switch between reading the Kindle book & listening to the Audible narration with Whispersync for Voice.
Get the Audible audiobook for the reduced price of $14.49 after you buy the Kindle book.
Last chance - Ends Thursday!
Learn more about membership
By completing your purchase, you agree to Audible’s Conditions Of Use and Privacy Notice.
Sold and delivered by Audible, an Amazon company

4.5 out of 5 stars
4.5 out of 5
145 global ratings
How are ratings calculated?
To calculate the overall star rating and percentage breakdown by star, we don’t use a simple average. Instead, our system considers things like how recent a review is and if the reviewer bought the item on Amazon. It also analyses reviews to verify trustworthiness.

Sarah Jackson
5.0 out of 5 stars A great read - good collection of King's stories
Reviewed in Australia on 17 November 2017
Verified Purchase
A wonderful collection of some of King's stories made into movies. The stories in the collection include:
"Rita Hayworth and the Shawshank Redemption" - you realise how good the film adaption was when you read the original
"The Mangler" - I must admit I didn't know was written by King - love the movie - gory and silly
"Children of the Corn" - A far better written story than movie - but I still loved the original movie. You just can't go past evil children
"1408" - I had never read this, so was interested to see the original idea behind the movie.
"Hearts in Atlantis - Low Men in Yellow Coats" - I had forgotten how much I loved this story.
A great read.
Read more
Helpful
Report abuse

I was so inspired by the movie that I bought Stephen King Goes to the Movies.

While the other four stories are up to Mr. King's normal high standards, Rita Hayworth and The Shawshank Redemption soars above any other popular fiction that I have ever read.

I say that without any hesitation.

I know that most readers will have seen the movie at some stage over the last twenty years, so I won't go into the plot in great detail, only to say that there are some deviations, but broadly, the book runs along similar plot lines to the movie. I found reading this book a far richer experience, as it delves into the personalities of the two major protagonists in far greater depth.
The entire story is told in the first person, in a folksy way by Red: his experiences while serving a life sentence in a harsh penal environment, and his relationship, and observations of "fellow lifer" Andrew DeFresne. He describes the soul destroying experience of prison life; the sheer brutality, degradation and deprivation.
But through all the despair and futility, DeFresne's strength of character sends a message to all of us who take the journey to the final page. Sunshine will always follow rain. Light comes after dark. Hope will overcome hopelessness.
This book is truly inspirational!
Read more
Helpful
Report abuse

brighteyes
5.0 out of 5 stars Can’t get enough of The Shawshank Redemption
Reviewed in Australia on 4 June 2020
Verified Purchase
Rita Hayworth and the Shawshank Redemption made this book worth the purchase. Looking forward to reading the other stories
Read more
Helpful
Report abuse
See all reviews

This books looks at 5 of King's books/short stories that got turned into films (The Shawshank Redemption, 1408, Hearts in Atlantis/Low Men In Yellow Coats, The Mangler, and Children of the Corn. The first 2 weren't bad, but they dropped off pretty quickly after that, though The Mangler was pretty good, as it reminded me a little of Carrie in the telling,

My grumble is that I can't really see the point of this book. They aren't the books that made the best films, and any committed King reader will have read most of them before.

In addition, it's worth noting that the three later books I mentioned weren't particularly good films, so why anyone would be interested in them is beyond me quite frankly.
Read more
2 people found this helpful
Report abuse

sparks
3.0 out of 5 stars Good read, but....
Reviewed in the United Kingdom on 2 April 2019
Verified Purchase
A good read but most if not all stories are available in other books so beware. I bought this book and then found that I already had and had read some of the stories in other books
Read more
Report abuse

Mrs A L Harrison
5.0 out of 5 stars Stephen King
Reviewed in the United Kingdom on 30 January 2014
Verified Purchase
I love stephen king and have read nearly all his books, love his short stories which is what this book is about. Fast delivery and very reasonably priced
Read more
Report abuse