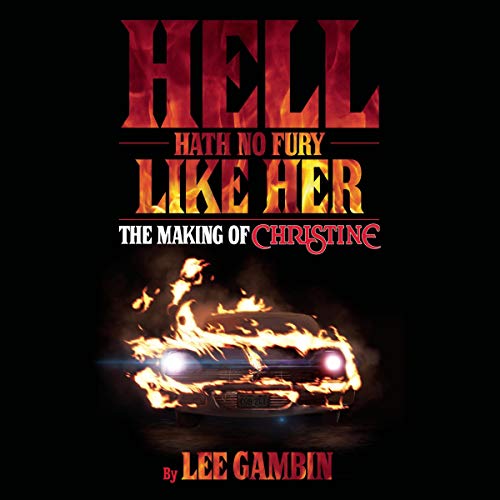 Hell Hath No Fury Like Her: The Making of Christine

Packed with interviews from director John Carpenter, screenwriter Bill Phillips, producer Richard Kobritz, stars Keith Gordon and Alexandra Paul, plus various members of the cast and crew including co-composer Alan Howarth and SFX artist Roy Arbogast, Hell Hath No Fury: The Making of Christine is a definitive look at the 1983 cinematic adaptation of Stephen King’s terrifying novel about the eponymous demonic Plymouth Fury and the obsessive teenage boy who loves her.

Author Lee Gambin examines Carpenter’s film by exploring themes such as possession, gender politics, sexuality, the use of rock’n’roll, the complexities of varied relationships, class resentment, the landscape of suburbia, the alienation felt during teenage years, and more, including a recurring coverage of cars in film (both supernatural and not).

Loaded with production notes, this book is essential for all John Carpenter fans, Stephen King devotees, horror-film enthusiasts, and for anyone who can remember their first car. So buckle in and take a ride and remember: “Rock'n'roll is here to stay! It will never die!”

Switch between reading the Kindle book & listening to the Audible narration with Whispersync for Voice.
Get the Audible audiobook for the reduced price of $4.49 after you buy the Kindle book.
Learn more about membership
By completing your purchase, you agree to Audible’s Conditions Of Use and Privacy Notice.
Sold and delivered by Audible, an Amazon company

4.7 out of 5 stars
4.7 out of 5
37 global ratings
How are ratings calculated?
To calculate the overall star rating and percentage breakdown by star, we don’t use a simple average. Instead, our system considers things like how recent a review is and if the reviewer bought the item on Amazon. It also analyses reviews to verify trustworthiness.

Amazon Customer
5.0 out of 5 stars A must for the Christine Fans
Reviewed in Australia on 10 January 2019
A must for any Christine fan out there, this is a behind the scenes look at the movie.
Images in this review

Dave Virgona
5.0 out of 5 stars A must for the Christine Fans
Reviewed in Australia on 10 January 2019
A must for any Christine fan out there, this is a behind the scenes look at the movie.
Read more

5.0 out of 5 stars A must for the Christine Fans
By Dave Virgona on 11 January 2019
A must for any Christine fan out there, this is a behind the scenes look at the movie.
Images in this review

Speedy
3.0 out of 5 stars More a psychoanalysis of scenes than a making of book
Reviewed in the United Kingdom on 8 October 2019
Verified Purchase
I was glad and surprised to see a book on the making of the cult classic movie. However, I was then disappointed to realise that the majority of the book was more of a psychoanalysis of most of the scenes of the movie. The exception there being the interviews with various cast and crew members about their experiences on set which often describe how a lot of the SFX worked, how they prepared to play each character, how the lighting worked and more.

The good thing is, though, is that the interviews make this book worth reading. But if you are into the psychoanalysis stuff then you will find much more value in it.

Guy
5.0 out of 5 stars Excellent, horror academia!
Reviewed in the United States on 29 March 2019
Verified Purchase
I recently revisited watching CHRISTINE and its one of John Carpenter's best films, underrated in its time as I recall but a great film, a pure and simple horror movie that reflects so nicely with the actual horrors of being a high school kid. So it's great cinematic stuff to understand inside and out, and read Lee Gambin's fun but studied "making of" book. Gambin is a grand Aussie curator of cinema who always shows off fascinating cinematic treasures on Facebook from his movie store and here with this book does a bang up job of reaching back in time and introducing us to the easygoing mastery of mid-80s John Carpenter at work. Great read for holistically understanding a great movie!
Read more
One person found this helpful
Report abuse

Troy R. Howarth
5.0 out of 5 stars If you love CHRISTINE, you need this book in your life!
Reviewed in the United States on 25 August 2019
Verified Purchase
Fascinating dissection of one of John Carpenter's more underrated works. The mix of analysis and production information makes it a wonderful resource.
Read more
Report abuse
See all reviews