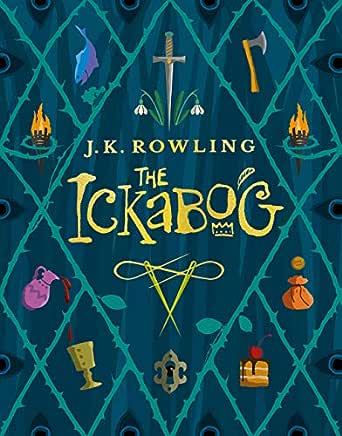 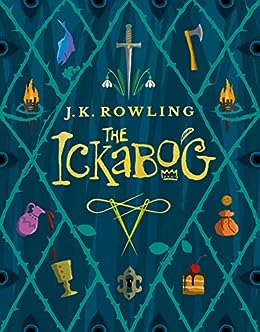 The Ickabog: A warm and witty fairy-tale adventure to entertain the whole family Kindle Edition

[A] handsome volume ... this is zinging storytelling with bite and a twist. It also has extraordinarily skilled and apt illustrations. -- Nicolette Jones, The Sunday Times

'... ultimately it is a tale of good triumphing over evil, and a tribute to the power of hope and friendship. Surely set to become a classic. Children's Book of the Week.' -- Press Association --This text refers to an out of print or unavailable edition of this title.

Stephen Fry is an English comedian, actor, writer, presenter and activist. Fry’s acting roles include a Golden Globe Award-nominated lead performance in the film Wilde, plus roles in Blackadder, Kingdom, Bones and V for Vendetta. He has also written and presented several documentary series and was the long-time host of the BBC television quiz show QI. Besides working in television, Fry has contributed columns and articles for newspapers and magazines and written four novels and three volumes of autobiography, Moab Is My Washpot, The Fry Chronicles and More Fool Me. Fry is also known for his voice overs and reading all seven of the Harry Potter novels for the UK audiobook recordings. --This text refers to an out of print or unavailable edition of this title.

J.K. Rowling is the author of the seven Harry Potter books, first published between 1997 and 2007. The adventures of Harry, Ron and Hermione at Hogwarts School of Witchcraft and Wizardry have sold over 500 million copies, been translated into over 80 languages, and made into eight blockbuster films. Alongside the book series, she has written three short companion volumes for charity, including Fantastic Beasts and Where to Find Them, which later became the inspiration for a new series of films, also written by J.K. Rowling. She then continued Harry's story as a grown-up in a stage play, Harry Potter and the Cursed Child, which she wrote with playwright Jack Thorne and director John Tiffany, and which has been playing to great acclaim in theatres in Europe, North America and Australia.J.K. Rowling has received many awards and honours for her writing. She also supports a number of causes through her charitable trust, Volant, and is the founder of the children's charity Lumos, which fights for a world without orphanages and institutions, and reunites families.For as long as she can remember, J.K. Rowling has wanted to be a writer, and is at her happiest in a room, making things up. She lives in Scotland with her family.The Ickabog is J.K. Rowling's first book for children since Harry Potter and was initially published online for families to enjoy and engage with creatively whilst in lockdown in 2020. --This text refers to the hardcover edition.

From J.K. Rowling, a warm, fast-paced, funny fairy tale of a fearsome monster, thrilling adventure and hope against all odds. --This text refers to an out of print or unavailable edition of this title.
Read more

4.8 out of 5 stars
4.8 out of 5
5,918 global ratings
How are ratings calculated?
To calculate the overall star rating and percentage breakdown by star, we don’t use a simple average. Instead, our system considers things like how recent a review is and if the reviewer bought the item on Amazon. It also analyses reviews to verify trustworthiness.

Helen Ford
TOP 500 REVIEWER
5.0 out of 5 stars LOVED THIS BOOK.
Reviewed in Australia on 23 November 2020
Verified Purchase
This new book by JK Rowling is fabulous. I read it myself before passing it on to my grandchildren. Well written, great value for money, great gift. Highly recommended.
Read more
3 people found this helpful
Helpful
Report abuse

Oscar Rynderman
5.0 out of 5 stars This Is A Great Book
Reviewed in Australia on 23 November 2020
Verified Purchase
This catches your attention when you start reading the first chapter.
This is a intents book.
I would not like to be living in cornucopia when lord spittleworth was lieing about the icabog.
I love how kids from around the world did the illustrations.
I put a picture into the competion myself it was great fun.
Read more
2 people found this helpful
Helpful
Report abuse

Linda Lee
5.0 out of 5 stars Very Enjoyable Story
Reviewed in Australia on 7 December 2020
Verified Purchase
I enjoy works written by J K Rowling and was not disappointed with this story. Well written, I think parents would love to read this to their children and older childern and adults would enjoy it too as a fairy tale with well appreciated goodand evil behaviour!
Read more
One person found this helpful
Helpful
Report abuse

Emma Yenkanna
1.0 out of 5 stars Boring
Reviewed in Australia on 11 December 2020
Verified Purchase
I had loved the Harry Potter books so when I saw this new book by JK Rowling I decided to get this for my son to read together. I actually had no idea of the controversy around this book and to be honest that didn’t concern me at all. I simply couldn’t get past the 3rd Chapter as it was just so boring! Very disappointed.
Read more
One person found this helpful
Helpful
Report abuse

Angela Papas
3.0 out of 5 stars Children’s book
Reviewed in Australia on 13 November 2020
Verified Purchase
A lovely story with a message of hope
Some nice lessons
Can be a little scary for the very young I think an older primary school age book
Read more
One person found this helpful
Helpful
Report abuse

Carol
5.0 out of 5 stars A book for any age
Reviewed in Australia on 17 January 2021
Verified Purchase
Bought for Christmas present for daughter - well packaged, she is very fussy when it comes to her books so that was a plus. Excellent price and fast delivery. She was thrilled to receive - and she is 30yo! lol
Read more
Helpful
Report abuse

Tim Chen
5.0 out of 5 stars Great read
Reviewed in Australia on 3 January 2021
Verified Purchase
My 7 years daughter likes it a lot ti the point she memorises every characters names. The audio book by Fry is highly recommended!
Read more
Helpful
Report abuse
See all reviews

IlikeAmazon
5.0 out of 5 stars Really enjoying the book
Reviewed in the United Kingdom on 12 November 2020
Verified Purchase
I am really enjoying this book. My grandkids have read JK Rowling’s books and told me all about them.
I ordered this book, when there was a backlash about a tweet she did, as I wanted to support her stand for truth.
Read more
257 people found this helpful
Report abuse

Mr. Raymond Bolitho
5.0 out of 5 stars Good
Reviewed in the United Kingdom on 14 November 2020
Verified Purchase
Like another reviewer ,I bought this ,because of the backlash against the author,also i bought it ,for my wife as a Xmas present,as she loves J K Rowling
Read more
99 people found this helpful
Report abuse

Pamela Scott
5.0 out of 5 stars Such a treat
Reviewed in the United Kingdom on 16 November 2020
Verified Purchase
I’ve been looking forward to reading this all year and I wasn’t disappointed. I loved The Ickabog. The hardback is a gorgeous book with a lover cover, printed on high quality paper and packed with impressive illustrations by children who won a competition. It’s a joy to hold and touch. I loved reading it. The author offers a traditional fairytale with darker elements such as a mysterious monster said to terrorise Cornucopia and the sinister motivations of the King and his men. The book is for children so easy to read and understand without being too childish. I loved it.
Read more
50 people found this helpful
Report abuse

JHigRing
5.0 out of 5 stars My 9 year old loves this book!
Reviewed in the United Kingdom on 10 November 2020
Verified Purchase
I bought this book for my two kids (8 & 9) to read. My 9 year old has barely put it down since she got it yesterday. It's a lovely hardback book with beautiful font. The illustrations inside are fab and having them drawn by other children is a very nice touch.
Read more
37 people found this helpful
Report abuse

Quilter
5.0 out of 5 stars CHILDREN LOVE IT (and adults too)
Reviewed in the United Kingdom on 17 November 2020
Verified Purchase
I read this online in the summer and bought it for my 8 year old nephew when it came out. Just had a phone call from him to say he had really loved it. (His mum said he had been inseparable from it, but is now allowing her to read it.) He also mentioned how much he had loved all the pictures by children. I saw some of the photos on twitter and have now realised I am going to have to buy it for myself so I can see which of the pictures were chosen. Now I am also wondering which other nieces and nephews etc I can buy it for Christmas. It is a great story for children to show them what real courage is and how to stand up for what you know is right. Well done, JKR!
Read more
29 people found this helpful
Report abuse
See all reviews
Get FREE delivery with Amazon Prime
Prime members enjoy FREE Delivery and exclusive access to movies, TV shows, music, Kindle e-books, Twitch Prime, and more.
> Get Started
Back to top
Get to Know Us
Make Money with Us
Let Us Help You
And don't forget:
© 1996-2020, Amazon.com, Inc. or its affiliates