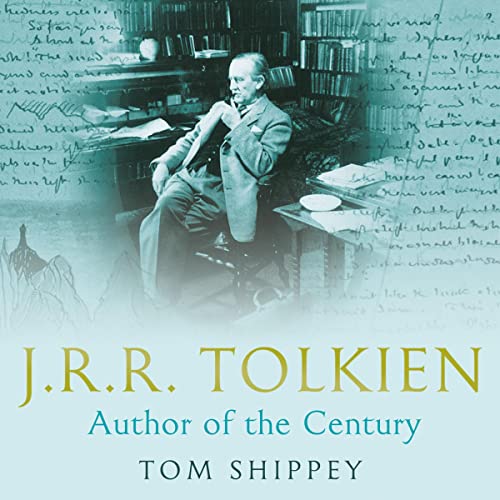 Following the unprecedented and universal acclaim for The Lord of the Rings, the respected academic and world-renowned Tolkien scholar Professor Tom Shippey presents us with a fascinating and informed companion to the world of J.R.R. Tolkien, in particular focusing on The Hobbit, The Lord of the Rings and The Silmarillion.

Written in a clear and accessible style, J. R. R. Tolkien: Author of the Century reveals why all of these books will be timeless, and shows how even such complex works as The Silmarillion can be read or heard enjoyably. Taking issue with the uninformed criticism that has often been levelled at Tolkien and fantasy in general, Professor Shippey offers a new approach to Tolkien, to fantasy and to the importance of language in literature, and demonstrates how his books form part of a live and continuing tradition of storytelling that can trace its roots back through Grimm's Fairy Tales to The Elder Edda and Beowulf.

Switch between reading the Kindle book & listening to the Audible narration with Whispersync for Voice.
Get the Audible audiobook for the reduced price of $14.49 after you buy the Kindle book.
Learn more about membership
By completing your purchase, you agree to Audible’s Conditions Of Use and Privacy Notice.
Sold and delivered by Audible, an Amazon company

4.7 out of 5 stars
4.7 out of 5
134 global ratings
How are ratings calculated?
To calculate the overall star rating and percentage breakdown by star, we don’t use a simple average. Instead, our system considers things like how recent a review is and if the reviewer bought the item on Amazon. It also analyses reviews to verify trustworthiness.

James Brydon
5.0 out of 5 stars Fascinating insights into Tolkien's creation of Middle-Earth
Reviewed in the United Kingdom on 28 August 2015
Verified Purchase
I should, in the interests of transparency, declare an interest before proceeding to review this wonderful book.

Back in the mists of time, while I was an undergraduate at Leeds University, Professor Tom Shippey was my tutor and had the thankless task of trying to guide me through the beauties and mysteries of Old English and Old Icelandic literature. His lectures were marvellous: engaging, entertaining and highly memorable, and a lot of my friends studying completely different subjects used to file in for his weekly performance.

This book picks up where his lectures left off. Shippey has been a lifelong admirer of J R R Tolkien's work: not just 'The Lord of the Rings' and associated books, but also his researches in the fields of medieval literature and comparative philology. As far as Tolkien was concerned there was no significant gulf between the two spheres. He initially started writing about Middle-Earth to create a world to set the different languages that he had created.

The works were deeply rooted in Tolkien's own background. Though born in South Africa, he passed most of his childhood in Warwickshire, living in the suburbs of Birmingham. This is reflected in the landscape of The Shire. There are, of course, some startling, but deliberate, anachronisms. While Middle-Earth equates to a late middle ages, the hobbits love tobacco, and while lost in the wilderness Sam Gamgee tries to convince Smeagol/Gollum about the wonders of the potato, or 'taters' as he puts it. Tolkien himself, like Sam and Pippin, was known to be partial to a few pints of strong beer while he sucked away at his pipe.

Professor Shippey takes the reader in fascinating, though never overpowering, detail to show how Tolkien applied his wealth of learning to endow his novels with layer after layer of historical references, all of which add to the verisimilitude. Each of the different races encountered in 'The Lord of the Rings' have distinct but linguistically plausible languages which offer hints to a prior history. Their names resonate with philological clues. For instance, the language and history of the people of Rohan are modelled on those of the Anglo Saxons, while the dwarves' language shows deep traces of Old Norse.

Professor Shippey also offers a fascinating comparison between Denethor, Steward of Gondor, and Theoden, King of Rohan. The former appears the more imposing of the two, though he is merely holding the throne in trust against the return of the king. Theoden, while initially seen as frail and in thrall to his fay counsellor Grima, is the genuine article: a king in his own right and scion of a noble house, and he dies heroically, slain in battle surrounded by his men. Denethor, on the other hand, all but surrenders and chooses self-immolation rather than seeing the conflict through to its conclusion.

Perhaps this work is more particularly aimed at students of medieval literature rather than the mainstream Tolkien fans, but it is utterly enthralling.
Read more
6 people found this helpful
Report abuse

kieron
1.0 out of 5 stars Kindle version is missing referenced diagrams.
Reviewed in the United Kingdom on 7 September 2021
Verified Purchase
The book is interesting, but seems poorly translated to kindle.
The author references multiple diagrams which are absent from the book, which i can't find elsewhere online.
The text also occasionally references page numbers which given the difference page size of a kindle version are no longer accurate.
The diagrams especially feels like a real loss, one in particular is supposed to illustrate the relative movements of the members of the fellowship over time.
Read more
One person found this helpful
Report abuse

Pacem et amorem
5.0 out of 5 stars If you want to get to know Tolkien ...
Reviewed in the United Kingdom on 23 July 2013
Verified Purchase
I have read other Tolkien biographies and think that Shippey has achieved amazing things with this. He has conducted some really good research into Tolkien's background, inspiration and has give the reader a real insight into the genius of the man who created some of the best literature the 20th Century saw.
Tolkien was a one-off, a master of language who could create wonderful worlds for our imaginations to inhabit. Many authors who followed in his wake have acknowledged his role in influencing them. He crafted imaginary countries and the people, cultures and languages needed to make them seem real. It would be difficult, well-nigh impossible, for anyone to better his literary achievement which had been many years in the making and was still not completed at the time of his death.
Any Tolkien fan will voraciously devour the pages of this fantastic biography of one of our most gifted British authors.
Read more
One person found this helpful
Report abuse

Q
5.0 out of 5 stars reader-friendly fascinating erudition
Reviewed in the United Kingdom on 28 August 2007
Verified Purchase
if it had not been for the 'extras' on the dvd of jackson's LOTR, i would never have heard of tom shippey. however, i was impressed with what he said and how he said it, so i went searching online to see what books he had written. i found this one, among others, and am very glad i bought it. it is learnèd and erudite without being pompous or arrogant and he clearly knows his subject extremely well. his knowledge is far-ranging and his insights into JRRT and middle earth are fascinating.
Read more
4 people found this helpful
Report abuse