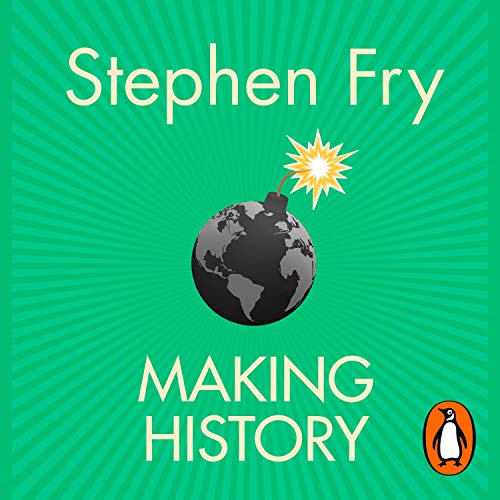 Brought to you by Penguin

Michael Young is a brilliant young history student whose life is changed when he meets Leo Zuckerman, an ageing physicist with a theory that can change worlds.

Together they realise that they have the power to alter history and eradicate a great evil. But tinkering with time lines is more dangerous than they can imagine, and nothing - past, present or future - will ever be the same again.

Read more
©1996 Stephen Fry (P)2021 Penguin Audio
Previous page
Next page
Learn more about membership
By completing your purchase, you agree to Audible’s Conditions Of Use and Privacy Notice.
Sold and delivered by Audible, an Amazon company

4.2 out of 5 stars
4.2 out of 5
309 global ratings
How are ratings calculated?
To calculate the overall star rating and percentage breakdown by star, we don’t use a simple average. Instead, our system considers things like how recent a review is and if the reviewer bought the item on Amazon. It also analyses reviews to verify trustworthiness.

Lindsay James Spears
5.0 out of 5 stars Fry is a rare genius
Reviewed in Australia on 27 January 2019
Verified Purchase
The most interesting thing Fry ever wrote. It has something for everyone; history , sci-fi, philosophy ,thrills and romance . ( well, nearly everyone )
Read more
Helpful
Report abuse
See all reviews

David Alan Williams
5.0 out of 5 stars To begin with the ends of beginning, possible spoilers ahead.
Reviewed in the United Kingdom on 26 August 2021
Verified Purchase
Or have I, yet again, totally misunderstood? This is very possible, and the reader of this "review" will soon be aware of it.
As others have pointed out, the difficulty with a time bending, alternate history novel is that any alternative must be to a certain extent predictable, there being in reality so few to choose from.
That being said, I was totally unprepared for, intrigued and delighted with Stephen Fry's approach to this problem.
In the end evil can never be totally defeated, like a virus it simply mutates, and adapts itself to new environments and circumstances.
The perpetual "victories" of evil, however complete they may appear to be at any particular point in time, are but transitory. Being nothing other than evil, they are thus irrelevant, an unfortunately inevitable but nevertheless pointless injury to ultimate destiny.
On the other hand:
- Love is not love
Which alters when it alteration finds,
Or bends with the remover to remove.
O no! it is an ever-fixed mark
That looks on tempests and is never shaken;
It is the star to every wand'ring bark,
Whose worth's unknown, although his height be taken.
Love's not Time's fool, though rosy lips and cheeks
Within his bending sickle's compass come;
Love alters not with his brief hours and weeks,
But bears it out even to the edge of doom.
If this be error and upon me prov'd,
I never writ, nor no man ever lov'd

Love does not conquer, that is the role of evil. Love simply is. The true "end" of all possible histories.
Read more
Report abuse

C. Metairie
1.0 out of 5 stars Disappointing
Reviewed in the United Kingdom on 16 May 2020
Verified Purchase
I have enjoyed eveything else that I have read by Stephen Fry. I waded on through this. Got about a quarter of the way in, and realised that I wasn't actually interested in any of the characters. I got the general idea and after that it did not inspire me, so I didn't bother to finish it
Read more
3 people found this helpful
Report abuse

Winning Form Mr Lips
5.0 out of 5 stars I am delighted to have done so
Reviewed in the United Kingdom on 4 May 2016
Verified Purchase
Being an unashamed fan of alternate history or "what if" novels, I ordered this book as soon as I discovered a reference to it in a customer's review of a different "changed past" novel. I am delighted to have done so. I am a great fan of Stephen Fry as a television host and film actor, but this is the first time I have delved into one of his books.

The premise that the world might be a better place had Hitler never even been born is not exactly new, and nor is the premise that in fact his early death or non-existence might have actually made things worse. A lot worse, even. After all, the conditions which led to the Nazis' rise to power in post-World War 1 Germany would have existed whether Hitler was around or not, and a different Fuhrer might just have guided Germany to the world domination which Hitler himself failed to achieve. Here Stephen Fry creates Rudi Gloder, who becomes Fuhrer of Germany in an alternative history, and much of the world (especially Europe and most especially Russia) suffers greatly for it.

In fact, what would have been needed to stop the Nazi rise to power would have been for World War 1 to never happen, a premise which Ben Elton dealt in his excellent recent novel "Time And Time Again", and in which book the Law of Unintended Consequences also becomes all too apparent as things don't map out at all as its characters intended. If you are going to sterilise anybody by the use of a male contraceptive dropped back in time (as is the premise of Making History), rather make Kaiser Bill's father incapable of siring children, not Hitler Senior. But that is bye the bye. This is obviously all fat-fetched fiction, and, as always when it's in the hands of a writer with a fertile imagination, this alternate history work is a fascinating read.

Yes, I have a few issues with "Making History." It takes a long time to hit its stride, and I fail to see the need for several of its chapters to be written in the style of a screenplay. Furthermore, as another reviewer here has written, I probably would have liked the book even better had the alternate history part been set in Nazi Europe and not in an America which, for reasons not explained, is openly homophobic and, racist, engaged in a cold war with Europe, and overrun with secret police. Yet these American scenes are handled extremely well, as the realization gradually dawns on the reader that the country is a an increasingly far cry from the USA that we know today, and not in good ways. Obviously we will never know just what America or Europe might have been like had there been no Hitler, but Fry's imagining of it is as realistic and valid as any other potential scenario.

Despite a few quibbles, I am content to give "Making History" five stars out of five,. Once I became accustomed to the author's somewhat peculiar and rambling writing style in the early chapters, I simply could not put it down., I finished all 500 plus pages in two sittings, and missed episodes of some of my favourite TV shows while doing so. And ultimately, isn't this desire to be so engrossed in a story that we are happy to skip other pleasurable pursuits one of the principal reasons why we read books in the first place?
Read more
4 people found this helpful
Report abuse

Vicky Wilde
5.0 out of 5 stars A thought provoking read
Reviewed in the United Kingdom on 12 April 2020
Verified Purchase
Reading this book made me consider a great many questions. Aside from the usual time-travel related speculations, I found myself wondering, 'Was Hitler merely instrumental in the rise of the Nazi party?' Would Nazism have been as successful, or perhaps more successful, if another Dietrich Eckart opinionated young WWI soldier?

Ultimately (without dropping too many spoilers) Fry's opinion seems to echo that of HG Wells: meddling with time causes nothing but trouble!
Read more
One person found this helpful
Report abuse

Matthew Downing
2.0 out of 5 stars Wasted opportunity
Reviewed in the United Kingdom on 5 February 2015
Verified Purchase
Love Stephen Fry generally (all formats). Am surprised by the high reviews of this. As it is by him the writing style is great, but the plot doesn't work. Each additional messy premise jolted me out of the narrative.
[SPOILERS]
And I'm not talking about time-travelling to kill Hitler, I'm fine with that, that's a great set up.
But, for example, the idea that someone doing a PhD in history (from Cambridge) would think you could kill Hitler and the world would automatically be a better place, is nonsense. I only have a bachelors in history, and I know if you changed anything in the past the outcome would be random - maybe better, maybe worse. It's great to have a book explore that (and maybe would have been good to watch the protagonists try to make different changes to see how the outcomes shift), but the "great reveal" that the world is worse would only work if someone had no knowledge of how history operates, not someone with PhD-level understanding. If time travel had been accidentally discovered by drunks in a pub, for example, and their first thought was "Let's kill Hitler! After another round of vodkas.".
And the ending... well I guess no-one can blame Hollywood for turning Titanic into a love story any more. One of the greats of our culture (this was only one book) jettisons an exploration of the impact of Hitler on history into a rushed love ending. Summarised as "I woke up and it was all a dream, except I'd changed sexual orientation and the fictitious person I was dreaming of appeared in bed beside me!"