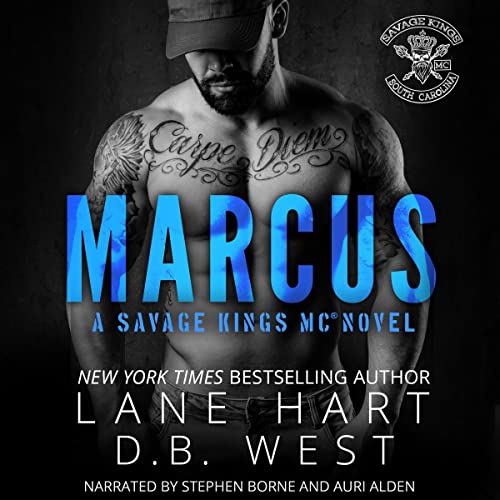 When Marcus De La Cruz volunteered to sponsor the next prospect for the Savage Kings MC, he never expected to have a female candidate. Instead of being intimidated by him, she gives as good as she gets.

Teagan Allen knows the dangers of being a member of an outlaw MC all too well, since her father was killed while wearing the bearded skull king patch. Roy Allen wasn’t just a member; he was the president of the Charlotte chapter. The man loved the club more than anything - even his own daughter.

Hoping to better understand her father’s obsession with the biker club, Teagan is determined to wear the same coveted patch, no matter what it takes, even if she has to manipulate the man in charge of picking the new prospect.

Marcus may think he has the upper hand when it comes to his secret exploits with Teagan, but she’s about to show him that more than one person can wear the crown in their relationship.

4.5 out of 5 stars
4.5 out of 5
628 global ratings
How are ratings calculated?
To calculate the overall star rating and percentage breakdown by star, we don’t use a simple average. Instead, our system considers things like how recent a review is and if the reviewer bought the item on Amazon. It also analyses reviews to verify trustworthiness.

MarieD
TOP 1000 REVIEWER
5.0 out of 5 stars Not a TJ fan
Reviewed in Australia on 30 December 2021
As much as I have loved each of these club members getting their women I'm not to sure on Teagan I know her dad was a president so she has biker blood and the right requirements to prospect. I just think she goes about it the wrong way she always said she hated how her dad would leave her mum yet she is using her body to manipulate a brother yet gets jealous when she thinks he may be straying. Poor Marcus is so worried that his little kink is going to get him in trouble one day so has abstained for so long I'm not surprised he's a magnet for TJ's advances.
It seems everyone involved has made some bad choices and lied but will it ultimately have the effect to either have TJ as a prospect or just as Marcus's ol'lady.

I received a free copy of this book and am voluntarily leaving a review.
Read more
Helpful
Report abuse

Stephanie
4.0 out of 5 stars Unexpected
Reviewed in Australia on 31 December 2021
This book was not what i expected from reading the blurb. This book is all about Marcus and Teagan, very little of the MC and other characters involved. T.J. and Marcus are full on from the beginning. Once teagan arrives at Marcus' house, the games begin! And what fun games they are. The sex is out of this world and the way their relationship develops is slow and surprising but enduring. Their are a few surprises from t.j.s mum but in the end it is a happy ever after.

I received a free copy of this book via Booksprout and am voluntarily leaving a review.
Read more
Helpful
Report abuse

Tinna
TOP 1000 REVIEWER
4.0 out of 5 stars finding love
Reviewed in Australia on 30 December 2021
Marcus hides his lonely side from the MC. When TJ who lost her dad to the club decides to seduce him as she is desperate to become a prospect of the club, Marcus is only to happy to play along. Marcus has usual bedroom activities and TJ is happy try them out. The only issue she has with him is his caveman behavior. Can these two find a middle ground to find their HEA?

I received a free copy of this book via Booksprout and am voluntarily leaving a review.
Read more
Helpful
Report abuse

Nicole Henderson
TOP 1000 REVIEWER
4.0 out of 5 stars Teagan and Marcus
Reviewed in Australia on 26 February 2022
4.5 stars. Teagan lost her father in her teens. He was the president of his MC. She grew up thinking that the MC was more important to him than she was. She decides to want to prospect so she can understand the pull of an MC. Her plans to manipulate turns sideways when Marcus makes an appearance in her life. It’s a story that you’ll love and of course it’s written by a duo that know how to write a good MC story.
Read more
Helpful
Report abuse

Gillian
5.0 out of 5 stars Wonderful Read !!
Reviewed in Australia on 27 December 2021
Teagan or TJ lost her father when he was President of the Charlotte chapter of the Savage Kings. She wants to become a Prospect for them so she heads of the Myrtle Beach to apply with them.
Marcus is a guy that likes his s*x to be one way but when he meets Teagan he try’s his best not to scare her.
Loved this book.
I received a free copy of this book for an voluntary and honest review.
Read more
Helpful
Report abuse
See all reviews

Hanbarn
2.0 out of 5 stars disappointing
Reviewed in the United Kingdom on 4 January 2022
Verified Purchase
I love these authors but have to say I found this book so disappointing. Did not take to female lead, found her character irritating and manipulative beyond belief. Very sexualised character who persistently paraded around in the cut with nothing on underneath even in public was off putting.As for Marcus he started off well but quickly developed as a stupid character for someone in an mc that had responsibility for prospects in an ongoing war . Didn’t rate any real emotion or relationship between them apart from sex. So disappointed in the lack of a decent storyline.
Read more
Report abuse

Sian bulpin
5.0 out of 5 stars Good read
Reviewed in the United Kingdom on 5 January 2022
Verified Purchase
Another cheeky read.
TJ is hell bent on prospecting and will do whatever it takes.
Marcus has no clue what to do with this little hell cat.😂😂.
Read And enjoy a raunchy ride!!!!!
Read more
Report abuse

Caroline Bailey
5.0 out of 5 stars Great
Reviewed in the United Kingdom on 30 March 2022
Verified Purchase
I love Marcus and his whole attitude he's a man's man with a huge heart that loves wholly and forever thoroughly enjoyed it can't wait for the next one brilliant
Read more
Report abuse

shasha
5.0 out of 5 stars Worth the wait!
Reviewed in the United Kingdom on 29 January 2022
Verified Purchase
Absolutely loved Marcus & how TJ brought him to his knees!! Hopefully we'll find out in the next book if TJ becomes a fully patched member of The Savage Kings MC!
Read more
Report abuse

joanne burt
5.0 out of 5 stars awesome
Reviewed in the United Kingdom on 7 January 2022
Verified Purchase
Another great book in the series I loved Marcus and TJ together they are both a bit scared from their pasts he’s a strong possessive alph she’s a strong feisty heroine
Loved it
Read more
Report abuse
See all reviews