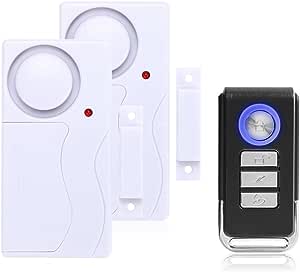 4.4 out of 5 stars
4.4 out of 5
366 global ratings
How are ratings calculated?
To calculate the overall star rating and percentage breakdown by star, we don’t use a simple average. Instead, our system considers things like how recent a review is and if the reviewer bought the item on Amazon. It also analyses reviews to verify trustworthiness.

IZABELA DOBRE
4.0 out of 5 stars Very loud alarm
Reviewed in Australia on 13 March 2021
Style Name: 2 Alarm and 1 RemoteVerified Purchase
I purchased these alarms because they seemed rental friendly and very easy to use. I still agree, they are very handy, cheap and they do the job right. I am very happy with the product so far.

I don't like how loud they are when you alarm them, really. It's like telling the neighbours heeey I.m alarming now, warning. Unnecessary and brings attention to your property.. but when alarmed, they actually work.

Denise L.
4.0 out of 5 stars Loud
Reviewed in Australia on 2 January 2021
Style Name: 1 Alarm and 1 RemoteVerified Purchase
This is super loud and will be good deterrent
Haven't put on the door yet but trialled it for sound. Ear shattering!

Julian Foster
2.0 out of 5 stars Batteries don't last very long at all
Reviewed in Australia on 15 March 2021
Style Name: 1 Alarm and 1 RemoteVerified Purchase
The alarm is excellent and is very loud, however only had 4 weeks now and have had to change batteries in 2 units. Just stops working without warning and only a single beep is heard when opening armed door. Shame as it looked so good :( :(
Read more
Helpful
Report abuse
See all reviews

Anonymous
5.0 out of 5 stars Excellent Product - Highly Recommended
Reviewed in Canada on 16 February 2019
Style Name: 2 Alarm and 1 RemoteVerified Purchase
We bought 3 sets of two door alarms with one remote control. We put 2 alarms per door for a more authentic and loud door alarm sound. One would work, but I wanted a very loud alarm sound.
The batteries are lasting so far. Two doors are alarmed continually and the third is on and off all day.
Overall we are very pleased with the ease of installation and use of the alarms.
The two main reasons we went with this product was the loud alarm and the remote. The remote is essential for our household.
If you want an alarm on your doors, I would highly recommend this product.
Read more
8 people found this helpful
Report abuse

Gina
5.0 out of 5 stars Great alarm system, cheap price!
Reviewed in Canada on 19 April 2020
Style Name: 2 Alarm and 1 RemoteVerified Purchase
Bought these when I moved to the more eccentric area of my city. Super easy installation. I can also verify that they’re extremely loud because I accidentally forgot to switch them off one day as I was heading out...and I am actually still suffering a mild PTSD from the sound lol. Anyone opens your door or window, you’re going to hear it and they’re going to probably run. Remote control is nice. One downside I guess would be that it beeps loudly every time I arm and disarm them. Unnecessarily loud. Which wouldn’t bother me if I lived alone, but I feel must be very irritating to my downstairs neighbours.
Read more
4 people found this helpful
Report abuse

Keith Marinier
5.0 out of 5 stars Cheap alarm that works for the cheap car that works
Reviewed in Canada on 14 October 2020
Style Name: 2 Alarm and 1 RemoteVerified Purchase
I'm the proud owner of a 2003 Chevy Cavalier that looks like it was rescued from the wrecker. Against all odds and mechanical reason, that car will not stop running and I'm happy driving the most reliable junker in town.
Lately, my car has been the focus of repeat break-ins (at least biweekly for the past few months). I have no valuables in my car, and nobody would ever want to steal it, but after replacing the window twice (which probably cost more than the car is worth), and having the weather stripping torn off around the windows (if they don't break in, they pry the window/door open), I decided I needed a deterrent.

After spending a night or two hiding in the back seat, waiting to catch the criminals in the act (like a vigilante superhero with a very narrow focus), I decided an alarm is probably safer.

Let me tell you, these thins are amazing! I popped the larger unit on the top corner of the doorframe (nearest the back seat). The smaller magnet went right on the window. Even more than 1cm apart, they do not go off when armed.
The sound these units make when you just put the batteries in would be enough to deter a would-be cupholder change scavenger. When the alarm actually sounds, it is LOUD! So loud, I feel a twinge of guilt about the next break-in, because it will certainly wake up my entire apartment complex from outside (I'm pretty much scaring away all the car thieves though. That's how I justify waking everyone up on a school night).

The tiny remote is great too. It's lightweight and works from a few feet away. There's never any doubt about the remote working, because when you click the "Arm alarm" or "Disarm" button, the units beep so loud your neighbours baby will start crying as a bonus alarm! (Neighbour and baby not included with purchase).

In a car, it's not the most aesthetically pleasing alarm option. It looks a bit like a car bomb or tracking device from a 70s mafia movie, but they hid it in the worst possible spot. But, if you spray paint over your rust spots, carry two spare tires (both flat), and have a CD player with your mixtape from 2007 stuck inside, this alarm will get the job done, doesn't cost a lot, and is a great conversation starter with the cops if you ever get pulled over!
Read more
2 people found this helpful
Report abuse

pouletaubeurre
5.0 out of 5 stars Pleasantly surprised! Cheap, yet efficient.
Reviewed in Canada on 13 June 2018
Style Name: 2 Alarm and 1 RemoteVerified Purchase
Those things are fantastic. I feared it wouldn’t work on one of my doors as it’s recessed, but the sensors even work at a 90 degrees angle. The controller has quite a long range, I can arm the system from wherever I am in my appartment. Setting it up is fairly easy, although the english instructions seem to have been oddly translated by google translate. Besides that, it’s very easy to install and operate. (I bought the magnetic only, so no vibration sensors.)
Read more
4 people found this helpful
Report abuse
See all reviews
Back to top
Get to Know Us
Make Money with Us
Let Us Help You
And don't forget:
© 1996-2021, Amazon.com, Inc. or its affiliates