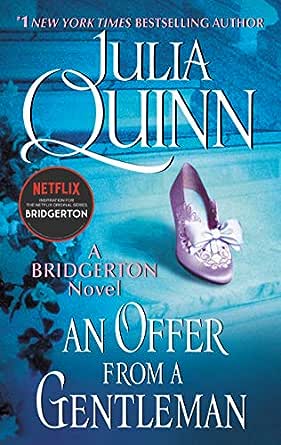 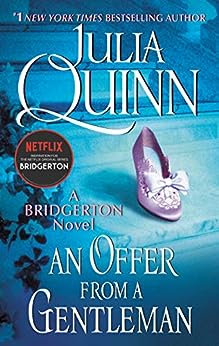 An Offer From a Gentleman: Bridgerton (Bridgertons Book 3) Kindle Edition

Miss Sophie Beckett is the illegitimate daughter of the Earl of Penwood in Julia Quinn's An Offer from a Gentleman. Raised in his home, Sophie has a tolerable existence until the Earl marries and her life takes a distinct turn for the worse. Sophie's new stepmother hates her, and when the Earl passes away, she relegates Sophie to the role of servant. Sophie's days are pure drudgery until one night when her fellow servants conspire to help her attend a masquerade ball. (Her life changes irrevocably when she meets handsome Benedict Bridgerton and falls head-over-heels in love. Benedict is equally smitten but when the clock strikes 12, his beautiful mystery lady runs from him leaving only her glove in his hand. He searches)

Quinn brings a fresh approach to this charming retelling of the Cinderella story enhancing the tale with a strong Regency setting and the warm trappings of Benedict Bridgerton's large family. Quinn has a reputation for witty dialogue and endearing charact (Faye Dyer, Amazon.com) --This text refers to an out of print or unavailable edition of this title.

Sophie Beckett never dreamed she'd be able to sneak into Lady Bridgerton's famed masquerade ball--or that "Prince Charming" would be waiting there for her! Though the daughter of an earl, Sophie has been relegated to the role of servant by her disdainful stepmother. But now, spinning in the strong arms of the debonair and devastatingly handsome Benedict Bridgerton, she feels like royalty. Alas, she knows all enchantments must end when the clock strikes midnight.

Who was that extraordinary woman? Ever since that magical night, a radiant vision in silver has blinded Benedict to the attractions of any other--except, perhaps, this alluring and oddly familiar beauty dressed in housemaid's garb whom he feels compelled to rescue from a most disagreeable situation. He has sworn to find and wed his mystery miss, but this breathtaking maid makes him weak with wanting her. Yet, if he offers her his heart, will Benedict sacrifice his only chance for a fairy tale love?

Julia Quinn started writing her first book one month after finishing college and has been tapping away at her keyboard ever since. The New York Times bestselling author of sixteen novels for Avon Books, she is a graduate of Harvard and Radcliffe Colleges and lives with her family in the Pacific Northwest. --This text refers to the mass_market edition.
Read more

4.5 out of 5 stars
4.5 out of 5
1,971 global ratings
How are ratings calculated?
To calculate the overall star rating and percentage breakdown by star, we don’t use a simple average. Instead, our system considers things like how recent a review is and if the reviewer bought the item on Amazon. It also analyses reviews to verify trustworthiness.

lisa
TOP 50 REVIEWER
4.0 out of 5 stars Cinderella was a bastard
Reviewed in Australia on 1 January 2016
Verified Purchase
I enjoyed so many things in this story of illegitimate Sophie making her way in a harsh world. It starts as a retelling of Cinderella including a truly evil stepmother and a secretive visit to a ball. At the ball Sophie meets Benedict and sparks fly, but Sophie leaves without giving her name. She knows that nobleman Benedict cannot have a future with a bastard.

The rest of the book explores a romance perceived as impossible by the aristocracy, and the awful life of illegitimate children. It makes me incredibly glad society has moved past such cruel hypocritical values.

But as far as the romance goes, I'm not sure it is fully convincing. The relationship between the two leads never really comes to life. It seems to be all about their different status, not about who they are as people. Still it's a good read that I recommend.

Kindle Customer
5.0 out of 5 stars I loved this book
Reviewed in Australia on 18 January 2021
Verified Purchase
I loved this storymof Benedict Bridgerton and Sophie Beckett. I loved their journey to them finding their happy ever after.
Read more
Helpful
Report abuse

Sue Curtis
5.0 out of 5 stars Fun read
Reviewed in Australia on 12 January 2021
Verified Purchase
I am a biased Julia Quinn follower from way back. I have read many of the her books over the years and I am rereading her Bridgerton series after watching the Netflix adaptation of The Duke and I.
Read more
Helpful
Report abuse

Alice
3.0 out of 5 stars I love Benedict!
Reviewed in Australia on 5 February 2019
Verified Purchase
Oh dear, the series may have gone south. I love Benedict, but I found the whole Cinderella theme really had nothing added to it to make it fresh or different.
Read more
Helpful
Report abuse

Amazon Customer
4.0 out of 5 stars A Fun Read
Reviewed in Australia on 13 December 2019
Verified Purchase
2nd epilogue was a bonus and love it
Read more
Helpful
Report abuse

California Quinn
4.0 out of 5 stars Not my favourite Bridgerton, but still FAB!
Reviewed in the United Kingdom on 26 July 2020
Verified Purchase
** spoiler alert ** Julia Quinn excels herself again with her third Bridgerton book which is Benedict and Sophie's story... I loved the start of this story which has Sophie attending a ball in a clear nod to Cinderella, enchanting Benedict as this mysterious woman who then runs off at midnight. They are both instantly in love, but Sophie isn't really a lady, in fact she's the bastard daughter of an earl who has been abominably treated by her cruel stepmother.. Anyway, two years later, Benedict bumps into her again, but not realising the maid being harassed by a nasty aristo - from whom he rescues her - is the same woman he's been mooning over for years. He ends up getting her a new job but then things get even more complicated because Sophie's not that happy that he doesn't recognise her, and Ben is not that happy that he's falling in lust with a maid who is most decidedly not his mystery lady of the night!! Although of course she actually is but decides not to tell her because he hasn't recognised her... I adore all of Julia Quinn's Bridgerton series, but I did duck this one a star, simply because - although the book is full of Quinn's wonderfully fluid writing and both Benedict and Sophie are absolutely adorable – I got very tense waiting for the moment when Benedict would find out Sophie's real identity which came rather late in the book. So entirely a fault with the reader not the writer, but it did make my enjoyment of the book a tiny, weeny bit less than the others... Also in the 2nd epilogue [MAJOR SPOILER ALERT HERE], I felt kind of annoyed that Benedict had gotten Sophie pregnant so many times, and almost ended up killing her!! Totally believable for the time period, but it still upset me (although probably not as much as it upset Benedict tbf!)
Read more
4 people found this helpful
Report abuse

MrsDemon
4.0 out of 5 stars Enjoyable read
Reviewed in the United Kingdom on 21 December 2020
Verified Purchase
I do enjoy reading these stories, but sometimes find it difficult with the spelling. I know they are written by an American author, but she is writing stories based in Regency England, where we spell colour with a U, realise with a S, we don't live five blocks away either. I feel it distracts me from the story.
Read more
4 people found this helpful
Report abuse

Ritu
3.0 out of 5 stars Regency Cinderella
Reviewed in the United Kingdom on 4 January 2021
Verified Purchase
An Offer From A Gentleman is the third in the Bridgerton series of books, concentrating on the love life of the second sibling, Benedict Bridgerton. It's been a couple of years, and with his older brother married, attentions are turned to him, and Colin, brother number three. But he's in no real hurry.
Sophie Beckett is the illegitimate child of an Earl, who has never openly acknowledged her but allowed her to live in his house as his ward. He passes away, leaving her in the care of her stepmother and two stepsisters, who have no interest in housing her, but suffer her presence, as they get a good allowance to keep her in the house.
In a Cinderella-esque twist to the story, Sophie is given the opportunity to attend one of the Season events, at Bridgerton House, during a Masquerade ball, with the housekeeper and staff being her collective Fairy Godmothers.
There she meets Benedict Bridgerton, and their two hour evening leaves them wanting more, but unable to have it.
The second part of the story follows their journey to meet once more. Will Benedict realise she is the woman in the silver gown who stole his heart, two years ago?
It's Cinderella, of course, he will, but not before plenty of other twists present themselves in the tale.
An easy read, but definitely not my favourite of the Briderton books, so far.

Anz
3.0 out of 5 stars Shrug
Reviewed in the United Kingdom on 15 January 2021
Verified Purchase
Benedict is perhaps the least interesting of the elder Bridgerton siblings. The author attempts to distinguish him from Anthony but he ends up being a copy and paste of both Anthony and Simon, all three think in the same way. All the individualities they have in the other books disapear as soon as we get into their heads. It gets a little wearying.

The story is however much more interesting and is a good change from the previous two books, the take on Cinderella is fun but merely transposes the fairy tale to the Bridgerton series without adding or taking anything away from the original. Sophie is a nice change but despite all the differences between her and Kate and Daphne she somehow falls into the same thought patterns.

As always with this series, the writing is clunky, the vocabulary american and the dialogue dreadfull.

All in all it is very readable and once again I read this in a few hours, but maybe an hour after finishing it, I have allready forgotten everything about it.
Read more
Report abuse

Frances Bard
5.0 out of 5 stars Cinderella
Reviewed in the United Kingdom on 6 May 2018
Verified Purchase
This was a 4.5.This was an interesting take on the Cinderella story. The heroine is the illegitimate daughter of an early who goes to a masquerade and falls in love with Benedict Bridgerton. I take 1\2 a star off for Benedict wanting her as his mistress : only half a star because we are in the nineteenth century where cross class marriages were rare and the stigma of illegitimacy was harsh. I felt that Benedict redeemed himself because he pretty quickly realises that he loves her and doesn't care about her background. Lovely epilogue about her sort of step sister Posy.
Read more
One person found this helpful
Report abuse
See all reviews
Get FREE delivery with Amazon Prime
Prime members enjoy FREE Delivery and exclusive access to movies, TV shows, music, Kindle e-books, Twitch Prime, and more.
> Get Started
Back to top
Get to Know Us
Make Money with Us
Let Us Help You
And don't forget:
© 1996-2020, Amazon.com, Inc. or its affiliates