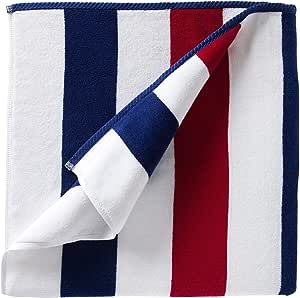 Brand: Laguna Beach Textile Company
4.6 out of 5 stars 1,234 ratings
Secure transaction
Returns Policy
Amazon-managed Delivery
Your transaction is secure
We work hard to protect your security and privacy. Our payment security system encrypts your information during transmission. We don’t share your credit card details with third-party sellers, and we don’t sell your information to others. Learn more
Amazon-managed Delivery
Amazon manages delivery by using preferred couriers/agents. Order delivery tracking to your doorstep is available

Luxury Beach TowelThis premium quality towel is thicker and softer than the typical beach towel. It has 630 GSM (grams per square meter is a measure of a towel's thickness) compared to 350-450 GSM of most towels. A LBTC towel is softer, will absorb more water, last longer, and stay drier than a towel with a lower GSM Thicker stripes and a hibiscus colored 'party stripe' brighten the timeless 'Cabana Stripe' pattern About Laguna Beach Textile CompanyFounded by a former cabana boy at one of Laguna's most exclusive hotels, the Laguna Beach Textile Company specializes in high-end resort quality towels and outdoor accessories. All products are designed in Laguna Beach. Follow us on Instagram @LagunaBeachTextileCo Due to the thickness of the towels, to avoid lint please wash towels on a delicate setting

4.6 out of 5 stars
4.6 out of 5
1,234 global ratings
How are ratings calculated?
To calculate the overall star rating and percentage breakdown by star, we don’t use a simple average. Instead, our system considers things like how recent a review is and if the reviewer bought the item on Amazon. It also analyses reviews to verify trustworthiness.

Martin Little
5.0 out of 5 stars Big, Soft and Stylish - A Perfect Beach Towel!
Reviewed in the United Kingdom on 19 April 2017
Verified Purchase
As I've a holiday booked to sunny Majorca, and I was in need of a new sun lounger/beach towel (the ones we have have lasted us a great many years and served us well over many trips), I thought I'd splash out and treat myself to something a little special.

I could've gone to Tesco's and picked up a bath sheet for a tenner (and those are pretty good), but their single colour and ribbed edge give them away as being for the bathroom, rather than idly soaking up the sun - and the towels they mark as 'beach towels' are those horrible microfibre things that feel like thin sheets of plastic and do nothing to actually absorb water.

I wanted something soft, fluffy, large, and styled like you imagine a classic beach towel to be styled like. No great big patterned prints, or funny logos or a picture of Captain America punching a Minion stamped on it. Just the kind of towel you imagine Hollywood actors lying on whilst sipping a cocktail from half a coconut whilst crystal clear waters lap at the white sands around them. Something understated, but stylish. Something you can tell by looking at is offering a nice bit of padding to that hard deckchair. And something you know will actually dry you down when you return from the pool.

With all that in mind I found this.

Yes, at nearly £20 (at the time of purchase), it's not the cheapest towel going, but I wasn't after cheap, I was after something that would tick all those boxes I laid out. This towel does that. It comes nicely packaged, with some awesome little tags on - I know that it's just packaging, and will end up in the recycling, but it's a nice touch instead of getting the towel loose or wrapped in what's essentially a bin bag.
It's big. Nicely oversized from a regular towel, but not so large it's going to be hard to fold away.
It's soft. It is a quality towel, nice and thick, fluffy, and absorbent.
It looks the part. The colours are gorgeous - sharp white, navy blue and a single seafoam brown colour - all in nice straight stripes.
I've given it one trial run at the local swimming baths, and run it through the wash, and it's not shown any immediate signs of wear for that - the true test is going to be how well it fairs on holiday, but for now I can't fault it, and I'm genuinely glad I made this purchase.

Jack Rose
5.0 out of 5 stars Fantastic
Reviewed in the United Kingdom on 23 March 2018
Colour: Red, White & BlueVerified Purchase
The beach towel I purchased from The Laguna Beach Towel Company most certainly lives up to it's expectations, Soft to touch, very absorbent, nice bright colours. With regard to size If anything I would describe it as more of a beach blanket than a beach towel. Without any hesitation I am seriously considering purchasing a second towel for another member of my family. Highly recommended , Fantastic.
Read more
Report abuse

Lenny
5.0 out of 5 stars The Perfect Beach Towel
Reviewed in the United Kingdom on 17 April 2017
Verified Purchase
This towel is incredibly soft. I can't believe how low the price is! It's the perfect accessory for those warm summer days in the parks in London. Very comfortable and washes well too! I will definitely be buying more of these - too bad I only got one to start!
Read more
One person found this helpful
Report abuse

Hector101
5.0 out of 5 stars Brilliant quality towel
Reviewed in the United Kingdom on 29 April 2017
Verified Purchase
These towels are thick and long. Very soft and great value.
Excellant quality all round.
Would buy again, in fact I bought another 2.
I'm 5' 10" and they cover me completely
Read more
Report abuse

Barry
5.0 out of 5 stars Five Stars
Reviewed in the United Kingdom on 5 April 2017
Verified Purchase
Fantastic quality towel with a true luxurious feel. Would highly recommend and buy again. A very professional company too.
Read more
Report abuse
See all reviews
Get FREE delivery with Amazon Prime
Prime members enjoy FREE Delivery and exclusive access to movies, TV shows, music, Kindle e-books, Twitch Prime, and more.
> Get Started
Back to top
Get to Know Us
Make Money with Us
Let Us Help You
And don't forget:
© 1996-2020, Amazon.com, Inc. or its affiliates