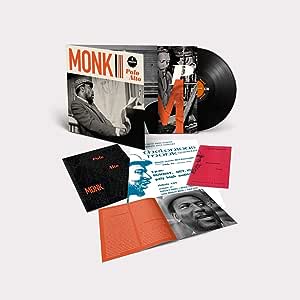 4.7 out of 5 stars
4.7 out of 5
257 global ratings
How are ratings calculated?
To calculate the overall star rating and percentage breakdown by star, we don’t use a simple average. Instead, our system considers things like how recent a review is and if the reviewer bought the item on Amazon. It also analyses reviews to verify trustworthiness.

Jazzrook
5.0 out of 5 stars A long-lost gem from the Thelonious Monk Quartet live in 1968.
Reviewed in the United Kingdom on 4 August 2020
Verified Purchase
This excellent album by the great jazz pianist/composer Thelonious Monk(1917-82) originated from a 1968 concert for racial unity organised,against the odds, by a 16-year-old Danny Scher at his high school in Palo Alto, California.
It was recorded by the school janitor on October 27, 1968 with Monk(piano); Charlie Rouse(tenor sax); Larry Gales(bass) & Ben Riley(drums) but the tapes have languished unheard until now.
Monk's highly empathetic group are in energised form playing 'Ruby My Dear'; 'Well, You Needn't'; 'Blue Monk'; 'Epistrophy' and a moving solo exploration of 'Don't Blame Me'.
Danny Scher and Impulse! Records are to be congratulated for their efforts in releasing this long-lost gem which has very good sound quality and is one of Monk's best live quartet recordings.

Btw ~ Unfortunately, the release of this rediscovered live album was delayed due to a dispute between Monk's estate and his previous record label.
Thankfully, 'Palo Alto' now seems to be easily available from several sellers.

Mr. R. J. Cartwright
5.0 out of 5 stars A recovered treasure
Reviewed in the United Kingdom on 3 August 2020
Verified Purchase
A truly wonderful Album bring us a recording so far unheard of a 1968 Monk Concert. The music and the performances by the Quartet are absolutely magnificent especially as it was recorded by a college janitor. The concert itself tells a great story - 17 year old college entertainments officer phones Monk's manager and agrees deal for Monk to do a concert at a little known Californian college. There were doubts about whether it would ever happen. But it did. And the CD brings it to us after a delay of 50 years, complete with a very informative booklet, and a copy of the poster advertising the concert. For Monk fans this is not only the album that nearly got away it is a magnificent album featuring Monk at his best.
Read more
5 people found this helpful
Report abuse

Barmee
5.0 out of 5 stars A must have - get it while you can (WIGIG)
Reviewed in the United Kingdom on 31 August 2020
Verified Purchase
Grab a copy if/while you can.
Supposedly the estate managing Monk’s affairs have banned this/insisted it be withdrawn from sale or similar due to its (in essence) ‘bootleg’ nature.
The sound quality is excellent, there should be no concerns on that front.
Whether talk of withdrawal is true or a myth you should still gab a copy when/if you can.

The songs are crowd pleasers and the story of how the concert came to be, in the liner notes, brings a lump to your throat (the band arrived in the schoolboy organiser’s brother’s little van (to be sure they would come at all!) ... with the bass sticking out of the window!).
The young lad who made this happen did a very fine thing (both in terms of the world of music and fund raising - and (it later turned out) in respect of race relations too).

Superb playing by the quartet (Monk: P; Rouse: S; Gales: B; Riley: D) and even the slightly out of tune school piano adds to the atmosphere.

This disc is an absolute ‘must have’ for any Monk fan. Get it while you can - before all available copies disappear.

JA Black
5.0 out of 5 stars Historic amateur recording but a moment in time to savour
Reviewed in the United Kingdom on 24 September 2020
Verified Purchase
For a while it looked like this recording was not going to see the light of day but it was great that the parties involved sorted out the legal dispute.

First thing to note this is an amateur recording so do not expect hi-fi quality - there's some distortion on a few of the tracks. There's only so much cleaning up can be done without losing the original raw quality.

The packaging is superb and the replica programme and poster are really well reproduced. The booklet has great liner notes that not only cover the concert itself but gives the historical concert. Sadly it seems as if the same problems around skin colour still blight our society.

My only disappointment given the price of the record is the lighweight pressing - my copy is badly warped and will likely send it back for replacement. At the price I expected a premium wight pressing like the Blue Note Tone Poets releases and I'm pretty certain it was advertised as 180G on some sites.

But if you are a Monk fan then this is one to enjoy.
Read more
One person found this helpful
Report abuse

J. C. Williams
5.0 out of 5 stars Great Live Feel!
Reviewed in the United Kingdom on 24 October 2020
Verified Purchase
I've got to confess to being a Monk enthusiast so when this was announced I was intrigued, then disappointed when the wrangles over copyright made it look as though it might never see the light of day. How great it was that those issues were resolved. If you're worried by the fact that it was recorded by the school janitor, don't be - the recording captures the immediacy of a live gig where you get to feel the performers and audience were both appreciating each other. Detailed sleeve notes do justice to the recording and the facsimile poster for the even is a neat idea. Has anyone else noticed the small ads on the inner sleeve? The range of movies on offer that sunday has some great choices!
Read more
Report abuse
See all reviews
Get FREE delivery with Amazon Prime
Prime members enjoy FREE Delivery and exclusive access to movies, TV shows, music, Kindle e-books, Twitch Prime, and more.
> Get Started
Back to top
Get to Know Us
Make Money with Us
Let Us Help You
And don't forget:
© 1996-2020, Amazon.com, Inc. or its affiliates