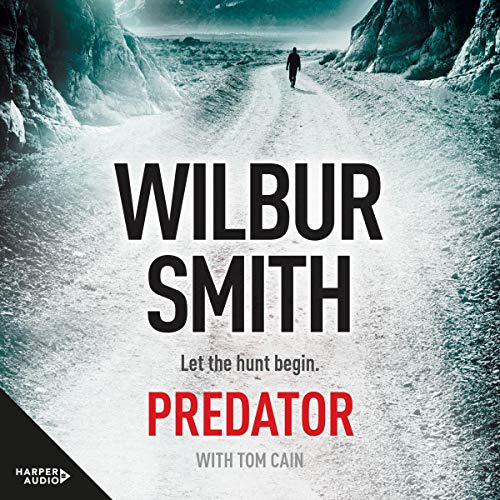 Predator: The Third in the Thrilling Hector Cross series

4.1 out of 5 stars
4.1 out of 5
1,353 global ratings
How are ratings calculated?
To calculate the overall star rating and percentage breakdown by star, we don’t use a simple average. Instead, our system considers things like how recent a review is and if the reviewer bought the item on Amazon. It also analyses reviews to verify trustworthiness.

Robert Scott
3.0 out of 5 stars Disapointing for Me
Reviewed in Australia on 4 May 2016
Verified Purchase
As a Wilbur Smith fan I found this book disappointing.
The main plot is all about the baddies pinching all of north Africa's underground water. While the political consequences are realistic, the task is simply impossible in geological terms and the size of the engineering task also impossible with-out world knowledge making the whole plot poor.
On the surface it has all the usual adventure highlights with the ever deepening plots, but as you get through them they often just do not give a reader the usual 'rush' most of Wilburs book do. One of the final 'get-out-of-gaol' plots have the hero's driving out in WW11 gun carriers that fire-up after 50 years underground - really !
A feature of this authors books has been his word pictures of African places - very few in this book.
However, its still an entertaining read as long as you do not question the plot too much.
Read more
2 people found this helpful
Helpful
Report abuse

David Ruthven
4.0 out of 5 stars My favorite Wilbur Smith books
Reviewed in Australia on 1 June 2021
Verified Purchase
I did not quite enjoy this as much as many of Wilbur Smith's other books for some reason - the two earlier books - Vicious Circle and Those in Peril in this 3-book series were a little better. Still a good book, and worthwhile reading.
I enjoy the Egypt series with Taita (the main character), and probably regard them as my favorites of Wilbur Smith. The Sunbird would have to be my all-time favorite, but I have not read any of the Courtney series.
Read more
Helpful
Report abuse

Amazon Customer
3.0 out of 5 stars predator
Reviewed in Australia on 6 April 2016
Verified Purchase
i guess it's what you want from Smith ------- action , feeling and sexual inuendo or sex descriptons. Being a massive Smith fan from the begining I kinda hoped the book could get a it more meaty, Cross is too superman, needs a bit of physical edge sure but I want ,d a full out blow for blow with Congo! All together a great read, take Cross out of cotton wool for a while and x let him be venerable physically .
Read more
2 people found this helpful
Helpful
Report abuse

Andrew Galloway
1.0 out of 5 stars Disappointing
Reviewed in Australia on 10 January 2019
Verified Purchase
Only the names have been kept to protect the authors..
Having read almost all of Mr Smith’s books I could not see his writing style or turn of phrase in this book. Yes they kept the names but not the integrity.. they even seemed to get bored from time to time and just wrapped up the story to date in a couple of pages... no more for me I’m afraid
Read more
Helpful
Report abuse

Chrishawk67
5.0 out of 5 stars Wilbur Smith does it again
Reviewed in Australia on 6 March 2019
Verified Purchase
A good stand alone story if you haven't read the first. No one does revenge quite as well as Smith.
Read more
Helpful
Report abuse

Amazon Customer
2.0 out of 5 stars Over the top
Reviewed in Australia on 26 November 2016
Verified Purchase
Having read all but one of Smith's novels, I can say this is totally over the top. Full of adventure but what used to be a suspensive story line in his earlier novels is now replaced by very descriptive sex and violence. It's a pity really. This trilogy is not his finest hour.
Read more
3 people found this helpful
Helpful
Report abuse

gordon howard
1.0 out of 5 stars Worst Wilbur Smith book ever!
Reviewed in the United Kingdom on 11 May 2016
Verified Purchase
I have purchased every book "wtitten" by Wilbur Smith. I pre-ordered this and kept it to read on a recent holiday. What a load of rubbish! If it had been a paperback, I would have thrown it in the bin less than half way through! Having paid £9.99 I stuck with it to the end. It did not get any better and I regret having wasted my time reading it.
Read more
37 people found this helpful
Report abuse

DiF
2.0 out of 5 stars Very disappointing
Reviewed in the United Kingdom on 6 March 2019
Verified Purchase
I understand someone co wrote this with Wilbur Smith. All I can say is "Wilbur Smith - please go back to writing your own books even if there are not so many of them". The style of writing is nothing like Wilbur's. I always was amazed at the brilliant description of Wilbur. He could make a blade of grass sound like a jewel in a crown. Predator is so obviously not written by him. It is not just the storyline that matters, but how it is conveyed to the public. PLEASE stop using other people to write your books.

Also don't bother with the audible. Shocking! Not sure what accent the people are meant to have but the accents used totally destroyed the character I had built up of each person. I deleted audible and went to using text to speech or whatever it is called (I have bad eyes so need some help hence audio) and was much better for me, as I do tend to try and read while listening.
Read more
Report abuse

Chameleon
1.0 out of 5 stars Tom Cain is NOT Wilbur Smith
Reviewed in the United Kingdom on 31 May 2016
Verified Purchase
God awful. This clearly not written by Wilbur Smith. It's almost like the publishers are trying to milk the name for every penny they can.
Read more
19 people found this helpful
Report abuse

R. D. GALLON
1.0 out of 5 stars Stinking book.
Reviewed in the United Kingdom on 29 October 2020
Verified Purchase
I have returned this FILTHY item back to where it came from.I was highly disgusted when I opened the package which was stinking of cigarettes ,covered in greasy fingerprints and was only fit to put in the bin . But I thought I would get more satisfaction by sending it back and give the seller-10 out of 5 if you know what I mean. At the end of the day I paid£3.20 for the book and it cost £4.10 to return to the seller. I have ended up putting the book on my kindle. ......yours faithfully robgallon @talktalk.net......I didn’t want to give it any stars for rating .
,
Read more
Report abuse

brian
5.0 out of 5 stars All action fired by the need for revenge . Must read all 4 books of this series.
Reviewed in the United Kingdom on 27 November 2019
Verified Purchase
I am a committed fan of all books by Wilbur Smith. This is the 4th book of his featuring the main character Hector Cross and possibly the best up to now. All action. Smith knows that in actions like he described men are liable to be killed in action and he is not afraid to kill off some of his man characters - all the more credit to him !!
I look forward to the next one.
Read more
Report abuse
See all reviews
Back to top
Get to Know Us
Make Money with Us
Let Us Help You
And don't forget:
© 1996-2021, Amazon.com, Inc. or its affiliates