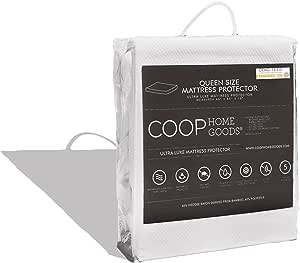 Brand: Coop Home Goods
4.6 out of 5 stars 1,477 ratings
Available from these sellers.

YOUR MATTRESS IS A MAJOR INVESTMENT PROTECT IT WITH THE BEST The Coop Home Goods - Waterproof Hypoallergenic Cooling Bamboo Mattress Pad Protector Cover. 100% WATERPROOF AND NOISELESS Our proprietary polyurethane backing is 100% waterproof - preventing leaks that will damage or stain your mattress. Best of all it is quiet and noiseless and doesn't change the feel of your mattress like other pads do. Use it under your bed sheets. HYPOALLERGENIC Coop Home Goods mattress protectors are a must have for those who suffer from allergens, like pollen or dust mites - the mattress cover blocks allergens, dust mites and bacteria from getting into your mattress. COOLS AND BREATHES WHILE YOU SLEEP The Bamboo fabric provides a cooling effect that helps prevent overheating or sleeping hot. The polyester is absorbent and prevents accidents from spilling over. QUALITY Our mattress protectors are made of 260 GSM Ultra-Tech fabric a luxurious jacquard textile that is 40% Bamboo and 60% Polyester. These mattress protectors are thicker and softer than others on the market SATISFACTION GUARANTEED There is no risk in trying our mattress pads. Try it and if you don't like it return it for a full refund within 30 days - Backed by a limited manufacturer warranty. This mattress protector is great for kids, pets and pet dander, expecting mothers, post pregnancy, incontinence and just about any accident that could damage your mattress. Coop Home Goods Mattress pads are compatible with Simmons, Sealy, Serta, Tempurpedic and many more mattress brands. Mattress pad warranty void if washing instructions are not followed. We recommend that you wash your mattress pad regularly to remove allergens or dust mites that may have gathered on the surface of the mattress pad.

4.6 out of 5 stars
4.6 out of 5
1,477 global ratings
How are ratings calculated?
To calculate the overall star rating and percentage breakdown by star, we don’t use a simple average. Instead, our system considers things like how recent a review is and if the reviewer bought the item on Amazon. It also analyses reviews to verify trustworthiness.

MyntFresh
4.0 out of 5 stars Purchased for hot-sleeping memory foam...
Reviewed in Canada on 9 December 2018
Verified Purchase
I purchased this item solely to cool down a memory foam mattress, and that's the only advertised feature I'll review.

I'm in Montreal, and for those who don't check date stamps it's December. That is to say, it's pretty cold now. Average indoor house temps for us hover around 18-19 though we do spot heat specific rooms up to 21-22. At night it's generally around 18. That said, I was will sleeping hot on my 5-month old Silk+Snow queen mattress. I'd wake up some nights literally drenched with sweat. I'm a 5'8" 155lb guy who really never sweats much and sometimes forgets to wear deodorant because I don't need it. So clearly the mattress is the cause, and rather than return it and deal with all that I opted to attempt a quick-fix first, especially since I don't sleep nearly this hot on our guest bedroom Douglas memory foam.

I purchased this cover since I absolutely love their pillows, both the standard and Eden versions and never sleep hot with either one. Reading reviews for various mattress covers didn't point to any single one being better than the other. Invariably for each one you'd see some people love it and say it worked, and some say it did nothing, or even made things worse. So I went with what I knew to be quality. Hint: Check Amazon.com reviews when there aren't enough on the Canadian site, if you didn't know... just scroll down. I also purchased, in conjunction, a Utopia microfiber fitted sheet since it was cheap and rated well. So I have not tested the pad on it's own, nor the sheet on it's own, and quite frankly I can't be bothered to do it now since...

It worked. I'm two nights in, and will definitely update my review if something changes (I'll also update in the Summer when our room temps will regularly hit 25+ due to enormous windows and evening sun. But so far the difference has been enormous. I wouldn't say I'm sleeping COLD. It's not dramatic. It's just enough for me to comfortable. I fell asleep wearing a long-sleeve t-shirt (a major no-no previously!) and woke up in it, normally, in the morning. That's how I knew it worked. Not a chance I'd have managed that before. I was down to sleeping shirtless with a single blanket, or occasionally taking off my t-shirt in the middle of the night, removing the blanket, etc.

I slept in a t-shirt with the comforter on (!!) the first night, and with a long-sleeve and blanket the second night. So it's definitely cooler. Whether it's the combo of items, or one more than the other I can't say, but they work. For a total of $65 I'm happy. I can try the mattress pad solo when I was the sheet. It's soft enough to sleep on, though not as cozy as their pillow covers which I love. It's thin and very easy to put on with deep sides. Perfect fit. The sheet was a little more fuss and still isn't even, but I'll save that for the sheet review.

Anyway, if you're thinking of trying this to cool down a hot memory foam mattress, give it a go. Combine it with a microfiber (or better, tencel, etc.) sheet and give it a go. The worst that'll happen is it won't work and you can save it for a guest bed, or return it.
Read more
8 people found this helpful
Report abuse

Thegreatgaddsby
5.0 out of 5 stars Oooh la la! Great value!
Reviewed in Canada on 2 February 2019
Verified Purchase
My husband is going through a never-ending phase I call mano-pause that makes him roasting hot in bed (wink). But seriously, this mattress cover is a great price, fits our mattress well and so far, is keeping us cool. It is quite smooth (slippery) and when we have our microfiber sheets on the bed, it does seem to make them slide around a bit but doesn't make them slide off.
Read more
One person found this helpful
Report abuse

Wayne J.
5.0 out of 5 stars Lovely cover
Reviewed in Canada on 14 August 2020
Verified Purchase
Enjoy this item. Came quickly and easy to use and put on. It's been cool and handy since I have used it and haven't had to wash it yet.
Read more
Report abuse

Frank C.
4.0 out of 5 stars Not bad
Reviewed in Canada on 12 June 2019
Verified Purchase
Could fit a lil snugger along the sides but so far so good.
Read more
Report abuse

Pete Richards
4.0 out of 5 stars Four Stars
Reviewed in Canada on 28 December 2017
Verified Purchase
Very good. Fits well and stays in position
Read more
Report abuse
See all reviews
Back to top
Get to Know Us
Make Money with Us
Let Us Help You
And don't forget:
© 1996-2021, Amazon.com, Inc. or its affiliates