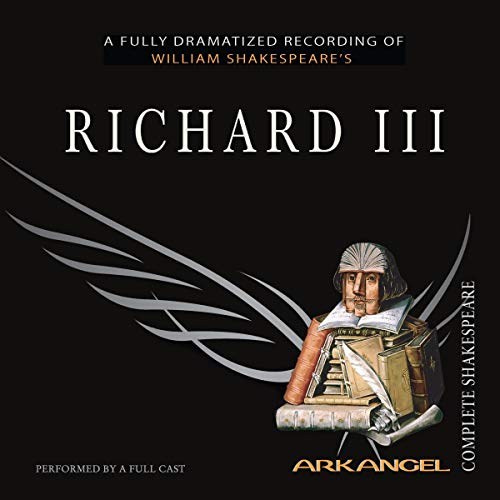 Brilliantly manipulative and entirely amoral, the hero-villain Richard is one of Shakespeare's greatest roles.

The Yorkists have emerged victorious from the civil wars and Edward IV wears the English crown. But Edward's misshapen brother Richard harbors kingly ambitions and will stop at nothing to achieve the throne. In a fatal battle on Bosworth Field, Richard meets the ghosts of all whom he has murdered and the Earl of Richmond, the future King Henry VII.

Read more
Public Domain (P)2014 Blackstone Audio
Previous page
Next page
Learn more about membership
By completing your purchase, you agree to Audible’s Conditions Of Use and Privacy Notice.
Sold and delivered by Audible, an Amazon company

4.6 out of 5 stars
4.6 out of 5
3 global ratings
How are ratings calculated?
To calculate the overall star rating and percentage breakdown by star, we don’t use a simple average. Instead, our system considers things like how recent a review is and if the reviewer bought the item on Amazon. It also analyses reviews to verify trustworthiness.

Stephen
4.0 out of 5 stars Richard III - Audio Drama
Reviewed in the United States on 27 June 2012
Verified Purchase
I have brought or will buy this series from Arkangel. There was one exception where most of the reviews were negative. This one was of very good quality and I recommend purchase of it.
Read more
Report abuse

Maria B
5.0 out of 5 stars Great resource!
Reviewed in the United States on 6 August 2014
Verified Purchase
I use this audio CDs for my Lit lessons. They make them very entertaining and easy going, plus, sticking to the original version of the classical book. Great resource for any teacher!
Read more
One person found this helpful
Report abuse

secondstar
5.0 out of 5 stars Great!
Reviewed in the United States on 11 July 2014
Verified Purchase
It was very easy to follow all the different roles. Would recommend it to anyone who wants to listen to the Bard!
Read more
Report abuse
See all reviews