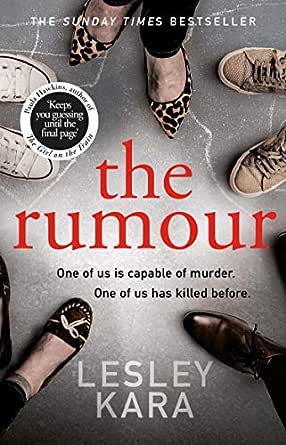 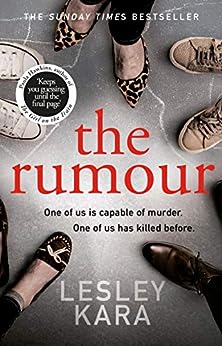 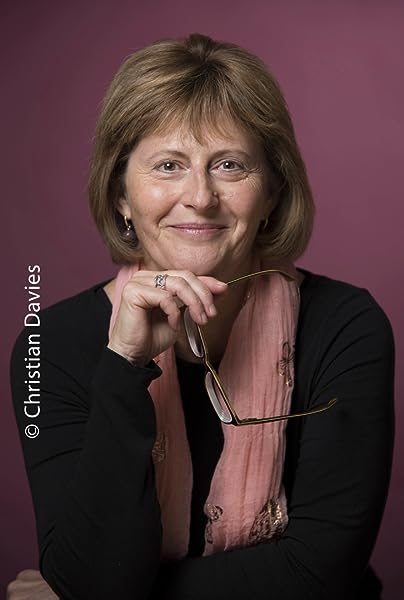 The Rumour: The bestselling ebook of 2019, with a killer twist Kindle Edition

In this chilling tale of paranoia, suspicion and accusation, Lesley Kara keeps you guessing until the final page. ― Paula Hawkins, No.1 bestselling author of THE GIRL ON THE TRAIN and INTO THE WATER

A great debut with a slyly clever premise and a rollercoaster ride to the very last sentence. ― Fiona Barton, bestselling author of THE WIDOW and THE CHILD

An intriguing premise, a creeping sense of dread, and a twist you won't see coming! Everyone is going to be talking about The Rumour. ― Shari Lapena, bestselling author of THE COUPLE NEXT DOOR

A brilliant premise with a killer twist. The Rumour depicts the prejudices and secrets that simmer in a small seaside town to devastating effect. ― Colette McBeth, author of AN ACT OF SILENCE

Pssst, have you heard... #TheRumour is a cracking thriller about the damage that idle gossip can wreak in a small town. I thought I had the twist worked out. Boy was I wrong! ― Tammy Cohen --This text refers to the paperback edition.

Lesley Kara is an alumna of the Faber Academy 'Writing a Novel' course. She lives on the North Essex coast. She is the author of two published novels- The Rumour, a Sunday Times Top 10 and Kindle No. 1 bestseller, and the critically acclaimed Who Did You Tell?. Her third novel, The Dare, is coming soon. --This text refers to the paperback edition.
Read more

4.3 out of 5 stars
4.3 out of 5
2,280 global ratings
How are ratings calculated?
To calculate the overall star rating and percentage breakdown by star, we don’t use a simple average. Instead, our system considers things like how recent a review is and if the reviewer bought the item on Amazon. It also analyses reviews to verify trustworthiness.

Jennifer Brown
4.0 out of 5 stars Unexpected twist
Reviewed in Australia on 21 November 2020
Verified Purchase
Started started rather slowly I thought, The usual he did she did gossip etc. But then things changed slowly and insidiously.
Not wanting to say too much, the people who think they are and always who they are! Ended up being a very enjoyable read if you like unexpected twists and dramas it covers that.
Read more
Helpful
Report abuse

vicky
2.0 out of 5 stars B grade thriller but easy to read ( a little too easy)
Reviewed in Australia on 3 January 2020
Verified Purchase
Can’t say I loved this book. It was a nice easy read however could barely tolerate the neurotic protagonist suspecting anyone who walked past her. Can we please just have one female lead who isn’t overly emotional.
The actual storyline is pretty far fetched - all these characters suddenly appear after Jo spills a random possible rumor
If you like not to think when you read this book is for you. If you like substance/realism to the storyline give this one a miss
Read more
Helpful
Report abuse

Amanda
5.0 out of 5 stars What does happen to child killers
Reviewed in Australia on 17 June 2019
Verified Purchase
Fascinating storyline depicting the life of secrecy lived by people who've had to change their identity, due to their crimes.
The child killer in this book resembles the infamous Mary Bell and what has been reported of her life as an adult. Highly recommend!
Read more
Helpful
Report abuse

beach
5.0 out of 5 stars Best thriller I read for a long time.
Reviewed in Australia on 18 March 2019
Verified Purchase
At last a fresh story with an unexpected twist to the storyline and in particular to the conclusion.Tense and fitting the genre. Highly recommended.
Read more
One person found this helpful
Helpful
Report abuse

book worm
4.0 out of 5 stars Easy reading
Reviewed in Australia on 18 July 2019
Verified Purchase
I liked this book because it was easy to follow but still captivated my interest. I liked the take that the book was about a child killer and their life after the event. I found the characters likeable if not the Michael and Jo thing too fairytale like at times.
Read more
Helpful
Report abuse

glenda robinson
2.0 out of 5 stars Disappointing
Reviewed in Australia on 13 February 2021
Verified Purchase
This was so disappointing I just could not get into it .I read 49% then gave up.
Read more
Helpful
Report abuse

Kindle Customer
TOP 1000 REVIEWER
3.0 out of 5 stars Enjoyable
Reviewed in Australia on 4 July 2019
Verified Purchase
Interesting story line that had me hooked from the start. Liked the characterisation and subplots. This one is worth reading.
Read more
Helpful
Report abuse

Cheryl Archer
2.0 out of 5 stars Predictable
Reviewed in Australia on 18 March 2019
Verified Purchase
I honestly cannot say I was overly engrossed with this book. Too far-fetched at times and completely lost me with a totally unnecessary anti-Trump comment at one point.
Read more
Helpful
Report abuse
See all reviews

Cath M
3.0 out of 5 stars A controversial subject is given an easy-reading, page-turner twist.
Reviewed in the United Kingdom on 14 December 2018
Verified Purchase
I downloaded this book for my Kindle after reading the first chapter as a sample online. I found the premise intriguing; the people of a small seaside town get wind of the fact that a child who killed another child many years ago may now be living amongst them as a middle-aged woman, under an assumed identity.

The exploration of gossip and rumour, and the damage they can do, was quite nicely done; also the problems of bullying and wanting to fit in, and indeed blend in, were quite cleverly echoed in separate strands of the story. However, considering the main character was supposed to be a strong, independent woman, I found her a bit idiotic, needy and annoying, and the romance aspect of the tale a vague distraction rather than adding to the story.

For me the dialogue was unconvincing and felt more like lines written for the characters, and unfortunately I found the last quarter of the book to be utterly ludicrous, so much so that I found myself laughing. It slightly spoiled the examination of abuse, regret, revenge, justice, atonement and the changes we go through in life.

Having said all that, the subjects of children who kill, and people who have to live under assumed identities and police protection, had clearly been very well researched. This story definitely digs a little deeper than the 'evil monster' tag that such children get branded with, and shows that things are often more nuanced and complicated than they might seem.

Whilst I found aspects of the book unsatisfying, I'd still say it fits the bill if you're after an easy reading page-turner for the beach or the cold winter evenings on the sofa in front of the fire.
Read more
92 people found this helpful
Report abuse

Gary H.
1.0 out of 5 stars Killer twist, my back door....
Reviewed in the United Kingdom on 14 March 2019
Verified Purchase
For the life of me I can't see why this twaddle has garnered such positive reviews. Just on and on and on about nothing. The first 10% sets the scene, the middle 80% which mostly describes house interiors and falls over itself to include quotes from Nietzsche and describe middle class problems.
The characters, almost all female, are just ghosts, they are barely described at all, so you find yourself trying to remember who Debbie was, or Maddie or Kay, or Karen, or any of them, they just pool into nothing.
The " boyfriend/ father" is really funny. Obviously a figure of desire for the writer. A man who can cook, with the body and mind of a God, who can make all women weak at the knees. A beautiful black man who when written sounds like a middle aged white woman.
The killer twist contained in the preposterous final 10% is so obvious, and such a let down, if the book hadn't been on my kindle it would be in the bin already.
Apparently the writers been on a creative writing course, and that's what this is, something you might write if you were on a creative writing course, bit that doesn't mean it should be published...
Don't believe the hype, or the blurb on the cover, or the positive reviews, this is mostly dreadful. God help us all if she goes on another creative writing course.
Read more
77 people found this helpful
Report abuse

Claire Wolfe
4.0 out of 5 stars Rumours can kill
Reviewed in the United Kingdom on 7 January 2019
Verified Purchase
If I could give half a star it would be 3.5 I think so I rounded up! This book was all over my facebook feed and was only 99p so I thought, why not? It was ok, it wasn't the best book I've ever read but it did keep me hooked.
The premise was simple - a rumour goes round a small village that a notorious child killer is living in the village and Jo wants to find out who it is. She also wants to make friends as she's only just moved to the village herself and she thinks that by gossiping about the rumour she can get closer to people. However, this backfires in more ways than one, with a slightly shocking twist at the end, although I had an inkling it was coming.
If you want something light to read that isn't too taxing on the brain but which has enough suspense to keep you reading then this is the book for you.
Read more
60 people found this helpful
Report abuse

kirsty
1.0 out of 5 stars Reviews must be for a different book.
Reviewed in the United Kingdom on 17 February 2019
Verified Purchase
Gosh this book was dire. Not sure how I managed to get to the end as it just rants on and on about inane rubbish.
After reading the reviews I was super excited about reading this but guessed the ending and book could have fitted into a quarter of the pages easy. Boring!
Read more
37 people found this helpful
Report abuse

Jo
1.0 out of 5 stars Absolute would not recommend.
Reviewed in the United Kingdom on 12 February 2019
Verified Purchase
This was like plodding through wet cement mixed with treacle. Repetitive, dull boring and honestly not worth the effort at the end.
Reviews implied a big build up to a great ending. If you managed to stay awake to get that far you’d be disappointed by the blaringly obvious.
Absolutely would not recommend.
Read more
35 people found this helpful
Report abuse
See all reviews
Back to top
Get to Know Us
Make Money with Us
Let Us Help You
And don't forget:
© 1996-2021, Amazon.com, Inc. or its affiliates