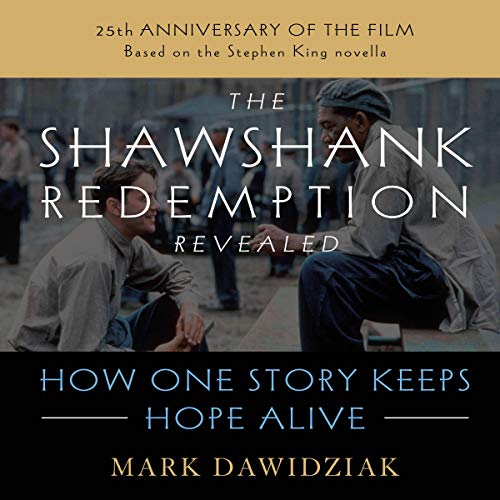 The Shawshank Redemption Revealed: How One Story Keeps Hope Alive

A 25th anniversary history and celebration of The Shawshank Redemption, one of the most cherished American films of the late 20th century and one of the finest movies made from a Stephen King story. The movie not only boasts a great story, it has a great backstory, starting with the dollar deal that eventually led King and co-stars Tim Robbins and Morgan Freeman to put their trust in a largely untested director making his first feature film.

Although the film received mostly positive reviews on its release in September 1994, the box office was disappointing and it failed to win many awards. But as Andy tells Red in the film, “no good thing ever dies”. The movie found new life, reaching an ever-growing audience on cable and home video (through word of mouth, it became one of the top-rented movies of 1995). Each year, The Shawshank Redemption rises in polls asking film fans to name their favorite movies. It has become nothing less than this generation’s The Grapes of Wrath, an inspiring story about keeping hope alive in bleak times and under the most horrendous conditions.

Switch between reading the Kindle book & listening to the Audible narration with Whispersync for Voice.
Get the Audible audiobook for the reduced price of $8.49 after you buy the Kindle book.
Learn more about membership
By completing your purchase, you agree to Audible’s Conditions Of Use and Privacy Notice.
Sold and delivered by Audible, an Amazon company

4.5 out of 5 stars
4.5 out of 5
51 global ratings
How are ratings calculated?
To calculate the overall star rating and percentage breakdown by star, we don’t use a simple average. Instead, our system considers things like how recent a review is and if the reviewer bought the item on Amazon. It also analyses reviews to verify trustworthiness.

Bookworm_12345
3.0 out of 5 stars Good Book That Could Use Some Editing
Reviewed in the United States on 21 September 2019
Verified Purchase
A very easy read with some information that you will not find elsewhere concerning the production of this great movie. However, it could have definitely been shortened and in the end, would come out a stronger book.

I particularly liked that, be it planned or other circumstances, that he got insights from a lot of the extras and locals associated with the film. Many of the A-listers in a movie will either keep their anecdotes to for the talk show circuit. The beauty/genius in asking the lesser-known performers is that you get a real understanding of how it feels to be a relative unknown, yet taking part in such an exciting, large-scale production. Actors who have been in the motion picture business for some time can easily forget that thrill which is so nicely presented in this book.

Also enjoyable was that throughout reading this book was that you got a real sense of the fine people who live in Upper Sandusky and Mansfield Ohio to the point you feel like you are visiting there.

That said, the book isn't without its issues. Reading it twice back-to-back, I got the strong sense the author did not have enough material for a required length and there is filler in parts of the book. I love dogs, but a whole chapter devoted to a couple of strays, could have been reduced to a paragraph. A tiresome chapter on the themes of the movie - as if anyone who truly appreciates this movie couldn't see them in the first place.
Some passages/comments/anecdotes are repeated throughout the book, with the words simply rearranged to make it appear fresh. I found it quite amusing that a chapter was written at length concerning the religious symbolism, yet the most obvious one of Dufresne leaving the sewer drain being a metaphor for leaving the womb and into the rebirth being left out.

Don't get me wrong. It is a good book, very entertaining, and you will feel like you're going through a wonderful trip down memory lane. It's just that the overall good pacing of the book was interrupted by chapters that felt clearly like they were put there to make the book thicker.
Read more
6 people found this helpful
Report abuse

Billio
1.0 out of 5 stars False Advertising! :(
Reviewed in the United States on 28 October 2019
Verified Purchase
False advertising. This appears to be the actual story like the movie....but it is a book that describes how the actual book was written!
Read more
3 people found this helpful
Report abuse

R. Jones
5.0 out of 5 stars Good Read for Fans of the Movie
Reviewed in the United States on 18 September 2020
Verified Purchase
I can't believe I never posted a review. I bought one of the first copies. It was released on Friday, August 9, 2019. I received mine 2 days later on Monday. It still had the new book smell. This was a great read for a fan of the movie. You get a real feel for how the picture came together. Also get to appreciate the locals and their help in bringing this project together.
Read more
One person found this helpful
Report abuse

Christopher G.
5.0 out of 5 stars Shawshank
Reviewed in the United States on 25 November 2020
Verified Purchase
I enjoyed this book tremendously!! Lots of facts revealed in the making of this masterpiece of a movie! I couldn't put it down. A must have for any fan of this movie!
Read more
Report abuse

Mike K
5.0 out of 5 stars Love the movie - realized there was a lot I didn't know!
Reviewed in the United States on 3 September 2019
Verified Purchase
Really enjoyed getting a behind the scenes look at all that happened during the filming of Shawshank Redemption. Lots of stories and details I learned about for the first time reading this book.
Read more
One person found this helpful
Report abuse
See all reviews