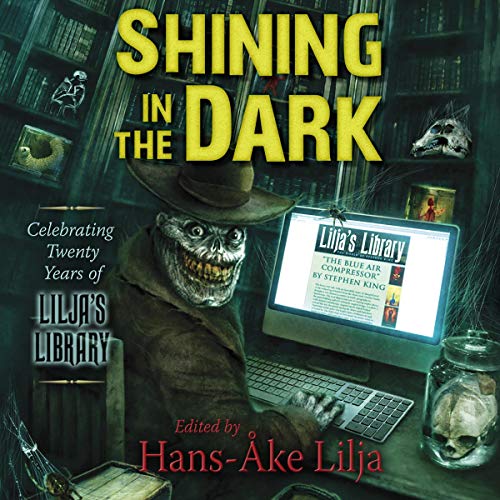 Shining in the Dark: Celebrating Twenty Years of Lilja's Library

Hans-Åke Lilja, founder of Lilja's Library, has compiled a brand-new anthology of horror stories to celebrate 20 years of running the number-one Stephen King news website on the web!

This anthology includes both original stories like a brand-new novella by John Ajvide Lindqvist (Let the Right One In), very rare reprints like The Blue Air Compressor by Stephen King and at least one classic tale that inspired Lilja's love of the macabre at a very young age!

Now, let's join Lilja.... He's already waiting for us, there ahead in the darkness.... You see him, don't you? Just keep walking, you'll find him soon enough, we promise.... He's there, shining and waiting for you.... Take his hand and then you, too, will shine in the dark!

'Drawn to the Flame' by Kevin Quigley - read by Jacques Roy

'The Companion' by Ramsey Campbell - read by Pete Simonelli

Read more
©2019 Hans-Åke Lilja (P)2019 Simon & Schuster
Previous page
Next page
Final days - Don't miss out!
Learn more about membership
By completing your purchase, you agree to Audible’s Conditions Of Use and Privacy Notice.
Sold and delivered by Audible, an Amazon company

4.2 out of 5 stars
4.2 out of 5
4 global ratings
How are ratings calculated?
To calculate the overall star rating and percentage breakdown by star, we don’t use a simple average. Instead, our system considers things like how recent a review is and if the reviewer bought the item on Amazon. It also analyses reviews to verify trustworthiness.

Mark D.
4.0 out of 5 stars Dark, so dark
Reviewed in the United States on 14 March 2020
Verified Purchase
This is an entertaining collection of short stories from some of the best dark fiction writers out there. The King story is alright, but the others steal the show.
Read more
One person found this helpful
Report abuse
See all reviews