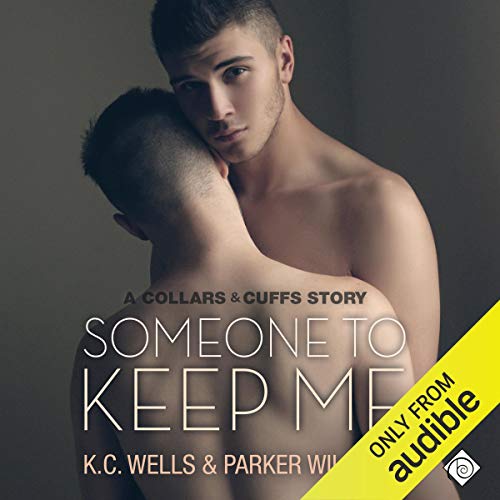 Someone to Keep Me: Collars & Cuffs, Book 3

4.0 out of 5 stars
4 out of 5
83 global ratings
How are ratings calculated?
To calculate the overall star rating and percentage breakdown by star, we don’t use a simple average. Instead, our system considers things like how recent a review is and if the reviewer bought the item on Amazon. It also analyses reviews to verify trustworthiness.

Veronica
TOP 500 REVIEWER
4.0 out of 5 stars Beautiful
Reviewed in Australia on 22 August 2016
I received a free copy of this book to read and review for Wicked Reads.

Scott on the other hand is naive and his lived a very sheltered life. He travels halfway around the world me to someone he met online but meets Ben instead. All Scott really wants is to be loved and taken care of. I just wanted to reach in the book and hug him.

Someone to Keep Me had a bit of angst at times. Our couple have relationship troubles before they are officially in a relationship but the struggle is worth it in the end. This is a really beautiful story.

Ms Victoria I Bentley-Yeates
5.0 out of 5 stars Brilliant !!!
Reviewed in the United Kingdom on 26 July 2018
Verified Purchase
Being totally honest, when I started the book I was very confused and didn't get how this Scott kid fit into the C&C series. Once I got far enough into the story, specifically when he was rescued by his "knight in shining armour", it all slotted into place.
It was a little too good to be true, when the little boy lost was seen and rescued by this really kindly soul who knew someone, who happened to not only have enough money himself to solve all problems. He also had a wealthy business partner with whom he had set up a fund for teens/young men exactly like this one. Just a bit too perfect.
However, if you could go with the cheesiness of that part of the story and focus on the relationship developing between the 2 MC's it transformed into an amazing story.
If I'm hyper-critical, at time Ben was a little bit of a wimp for a Dominant, but in fairness to Ben, he hasn't been a Dom for long and still had things to learn about himself and the role of a Dominant.

I would definitely recommend this book and the first 2 books in the series. Personally, despite what some authors might say. I don't think you can dip in and out of a series and they should be read in order, even if you read other books in between.
What I particularly liked was how the MCs from the first 2 books (plus some of the secondary characters) kept appearing in this book, and I can't help myself, Leo is still my favourite💗💗💗 such a shame I'm the wrong gender!

Phase58
4.0 out of 5 stars Kept boys
Reviewed in the United Kingdom on 29 January 2014
Verified Purchase
I've read the other Collars and Cuffs and this is in the same vein, Scott is gullible and closeted - not in a gay way, but by his parents, the boy knows hardly anything about the world and wouldn't even realise he was being groomed by the mysterious Jeff. I read the other two top reviews after reading the book and disagreed with both.
This book had me waiting and waiting for the evil Jeff to appear and boy was I surprised by the turn of events when he did. You know the photo isn't Jeff - but who is he?
I think for the sake of the plot the characters personalities go through mini changes. Ben the Dom goes all weak and un-Dommy and Scott can be a little viper when he wants rather than the sub he appears to be.
It was an enjoyable read because mostly I wanted to know who Jeff was and to see him get his comeuppance - that kept it exciting. It seems all the collars and cuffs boys have either suffered abuse or have incredibly low self esteem, Scott is no different.
I wouldn't want to give the story away, but if you enjoyed the other C&C tales I am sure you would like this one too.
Read more
One person found this helpful
Report abuse

Andrea
5.0 out of 5 stars Collars and cuffs 3
Reviewed in the United Kingdom on 9 December 2019
Verified Purchase
Scott is a lonely small American virgin who ends up meeting bar manager Dom Ben at the airport after he thinks he’s meeting up with an online boyfriend but in reality he would have been heading for a sex trafficking ring
Read more
Report abuse

Robert
5.0 out of 5 stars A happy ever after tale of the adventures of an American boy in England
Reviewed in the United Kingdom on 15 October 2018
Verified Purchase
Scott, an American boy meets an English boy in a chat room. They plan to meet in England, but the English boy fails to turn up at the airport and Scott is rescued by Ben, the Collars and Cuffs barman. After many adventures they find they cannot live without each other and they are married as part of a ceremony at Collars and Cuffs.
Read more
Report abuse