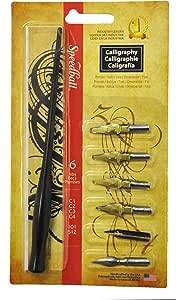 A Century of Fine Pen Making

Speedball's proud heritage for pen-making began in 1899, when the C. Howard Hunt Pen Company began manufacturing and distributing steel pens. Nearly two decades later, in 1913, Hunt sought to improve upon the functionality of the lettering tools of the day and joined forces with master letterers Ross F. George and William H. Gordon in 1913 to contrive and perfect a nib with a reservoir. It was nicknamed “Speedball” because of the efficiency of the pen, which cut working time in half.

Since that time, the Speedball name has become synonymous with high-quality pen nibs. In addition, Speedball now proudly manufactures a suite of complementary products. From pen holders to dip inks & cleaners to calligraphy markers and fountain pens, Speedball offers the broadest range of supplies designed specifically for your drawing & lettering works.

Whether you prefer a broad edge nib or are a pointed pen enthusiast, Speedball manufactures a nib that is precisely-crafted to suit your needs. Our commitment to quality is evident in every nib that is created in our plant in North Carolina. Utilizing the same historically proven processes specifically catered to each individual nib’s design, Speedball takes painstaking measures to ensure that each of our nibs meets even the most discerning standards. In addition to the highly-trained team that is responsible for making your Speedball nib, we have a dedicated member of our Speedball family that hand-inspects all nibs, one by one, that passes through production. That way, our valued artists never have to worry about their writing experience ahead when using a trusted Speedball nib.

Sets to Suit All Your Drawing & Lettering Needs

Offering the ideal pairings of nibs and holders that are specifically catered to suit a range of drawing or lettering projects, Speedball Pen Sets provide a convenient and value-priced means to stock (or re-stock!) your artist toolbox.

4.6 out of 5 stars
4.6 out of 5
767 global ratings
How are ratings calculated?
To calculate the overall star rating and percentage breakdown by star, we don’t use a simple average. Instead, our system considers things like how recent a review is and if the reviewer bought the item on Amazon. It also analyses reviews to verify trustworthiness.

CW4444
5.0 out of 5 stars Speedball: the original and best
Reviewed in the United Kingdom on 9 February 2019
Verified Purchase
Absolutely love Speedball products! Excellent quality and feels a bit more upper class and not cheap made in China plasticky like some other products. The only nib in here I’ll actually use is the 512 because I’m not heavy into italics, but the pen holder works awesome with my very favourite Hunt 513 nibs. Love the product and especially the price!
Read more
3 people found this helpful
Report abuse

lb
5.0 out of 5 stars Love it
Reviewed in the United Kingdom on 1 March 2019
Verified Purchase
I use this everyday and i love it. It can be a little tricky when using finetec products but otherwise it's great. I have been using it for half uncial and foundation hands so far. It's apparently much better for italic though so looking forward to trying that out.
Read more
3 people found this helpful
Report abuse

KasaKaos
5.0 out of 5 stars I am a Hand script beginner!
Reviewed in the United Kingdom on 29 November 2019
Verified Purchase
Lovely little group of nibs. They all DO give a different style and finish. I am using with black & metallic inks and having some great results!
Read more
3 people found this helpful
Report abuse

Kindle Customer
5.0 out of 5 stars Brilliant
Reviewed in the United Kingdom on 14 October 2018
Verified Purchase
Wish I had tried these beauties before now. Holds an amazing amount of ink, lovely and smooth to use. Very pleased. Have ordered more.
Arrived on time.
Read more
3 people found this helpful
Report abuse

Average Consumer
5.0 out of 5 stars good quality at a good price
Reviewed in the United Kingdom on 7 March 2016
Verified Purchase
Functional set of italic nibs C1-C4, also contains two of the more versatile and enjoyable writing nibs, good quality at a good price, cannot fault.
Read more
8 people found this helpful
Report abuse
See all reviews
Back to top
Get to Know Us
Make Money with Us
Let Us Help You
And don't forget:
© 1996-2021, Amazon.com, Inc. or its affiliates