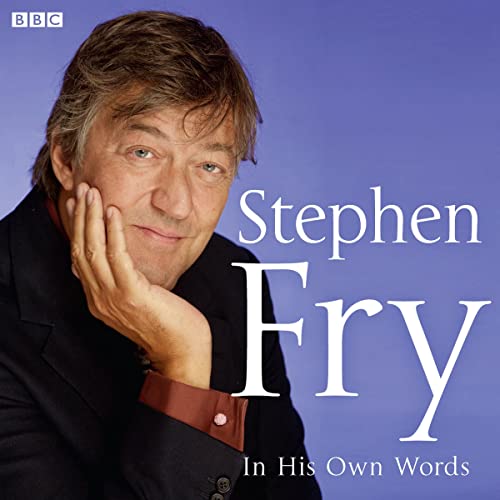 Stephen Fry in His Own Words: In Their Own Words

Stephen Fry (Author, Narrator), BBC Audio (Publisher)
2.7 out of 5 stars 35 ratings
See all formats and editions
Sorry, there was a problem loading this page. Try again.

In a fascinating collection of archive interviews with the celebrated writer, presenter and polymath, you can hear—in his own words—the beliefs and aspirations that have shaped him. He talks about his upbringing, a time when Stephen admits he was a rebellious schoolboy and behaved outrageously in order to survive school, and discusses his early love of language and Oscar Wilde. He also recalls discovering classic radio comedy and meeting Emma Thompson and Hugh Laurie at Cambridge.

Stephen is extraordinarily honest about some of his personal experiences, which have included imprisonment for credit card fraud, going public about his sexuality and coping with public criticism. He also comments on fame, addictions, being hard on himself and wanting to make people laugh.

Please note: due to the age and nature of this archive material, the sound quality may vary.

2.7 out of 5 stars
2.7 out of 5
35 global ratings
How are ratings calculated?
To calculate the overall star rating and percentage breakdown by star, we don’t use a simple average. Instead, our system considers things like how recent a review is and if the reviewer bought the item on Amazon. It also analyses reviews to verify trustworthiness.

Lesley Goodman
3.0 out of 5 stars VERY SHORT 45 MINS BUT VERY FUNNY
Reviewed in the United Kingdom on 21 March 2016
Verified Purchase
Very very good, but all too short. A lot of stuff repeated from his autobiographies, Moab, Chronicles and More fool. If you already have these, you may feel a little short changed.
Read more
Report abuse

J. Stephens
3.0 out of 5 stars Three Stars
Reviewed in the United Kingdom on 28 January 2015
Verified Purchase
some of the recordings are bad quality
Read more
Report abuse

DAVID BRYSON
3.0 out of 5 stars WHOSE IDEA WAS THIS?
Reviewed in the United Kingdom on 4 May 2013
Vine Customer Review of Free Product( What's this? )
Well, at least I didn't have to pay for this, and I would advise anyone who is thinking of that to think twice. It is always a pleasure to listen to Stephen Fry, and he is as urbane, charming and articulate as ever here. However is this the BBC's idea of an anthology? Of the six interviews from which we hear extracts, five are from the period 1987-99, only the Front Row snippet is at all recent, and even that dates from 2010. Some of the information is mildly interesting, to be sure. I had no idea that Stephen had been a kleptomaniac in his schooldays still less that he had done porridge for it, and I thought that his self-assessment as a half-hearted rebel was candid and honest with himself.

However I would have expected that much from Fry. What gets little if any proper treatment is his polymath knowledge, which is sometimes little short of astounding. The official blurb tells us that he is frank about his sexuality, but don't get your hopes up - he doesn't like sex and doesn't do it, or at least he used not to. Almost everything he says here about his time at Cambridge relates to his acquaintance with Emma Thompson and Hugh Lawrie, leading thespians in their time and maybe still to this day, but an odd subject to be given so much prominence as it is here. I mean, is it not worth the trouble of telling us what Stephen so much as studied at Cambridge?

I don't feel like prolonging such a catalogue of complaints, except to say that I'm not sure whether the short playing time (45 minutes or so) of the disc is a bad thing or a good thing under the circumstances. I could not bring myself to give less than three stars to anything featuring Stephen Fry, but, honestly, pants to the BBC for this effort.
Read more
4 people found this helpful
Report abuse

Stueeh Warburton
5.0 out of 5 stars Stephen Fry Audio CD interviews
Reviewed in the United Kingdom on 9 June 2013
Vine Customer Review of Free Product( What's this? )
This short (45 minutes) CD spans some interviews that Stephen Fry has given over the 1988-2010 period. They cover programmes such as Desert Island discs and the Parkinson show. In several of the interviews Fry mentions that he was tall and gangly at school although now he is "wide screen" and gangly. He hated sports lessons and expended more energy trying to avoid them than taking part. On the morning of a sports lesson, he would wake with fear and dread at the very thought of a games lesson. When he played cricket and he was fielding on the boundary he would say, "wait a minute girls whilst I finish reading this book". Or his reaction to be bullied -"please don't hit me or I am liable to get an erection!"
He loves music and knows loads of tunes in his head -but if asked to hum the theme to the TV series "The Champions" he would sing some mindless drivel.
He said at school he was very bright(!) and could pass exams with ease. He had no respect of teachers. If he passed a teacher who said, "late Fry?" he would reply, "yes so am I sir". To wit the teacher would say, "don't be clever Fry" -so "just how stupid do you want me to be sir?"
He was expelled from school for a term and realised how helpful his dad was teaching him maths -something he had not respected in his dad beforehand.
Fry was also a kleptomaniac and stole spanners and screw drivers for no good reason. He hit a high (low!) when he stole a wallet and then went on a credit card binge which was left unchecked for a period. Until a lady in Swindon wondered why this young lad had so many cards. The result was time at her majesty's pleasure. He said prison was a breeze when you are used to being at public school. Most of the inmates were Welsh or from the West Country -not his stereotypical bad guys -unlike people from London!
He had time to take stock whilst in the slammer and got his act together culminating in a scholarship to Cambridge. He thought there was a mistake and they would ask -"so you are not the Mr S Bry we were expecting?" -Methinks his modesty does not become him
He mentions the same thing himself -but neither does he want to be ignored when he is out and about.
Sometimes he wishes he was just a brain without the impediments of a body like a Futurama film. He mentions being celibate and that sometimes he did not want to risk friendships by sullying them with a physical relationship.
He would like a family -but with the convenience of a Victorian marriage -where he as the father sees the kids etc. at his convenience.
He talks about his time at Cambridge with Hugh Laurie where they won an acting prize -with little difficulty, and meeting Emma Thompson
He talks about his need to get a buzz from cigarettes and latterly, with cocaine.
He admits to being competitive for the public to like him -even if he was never competitive in the sphere of sport.
Just when you are enjoying all of these insights -bam - the CD is over! It probably needs a double CD offering to give you more insights!
It is a very enjoyable listen and well worth checking out. The jail spell and the kleptomaniac stuff were news to me.
Read more
Report abuse
See all reviews