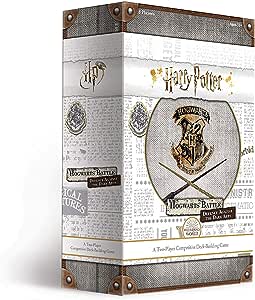 Item is in your Cart

There was a problem adding this item to Cart. Please try again later.
We do not have any recommendations at this time
Continue shopping
New (10) from
$32.80 FREE Delivery on first order.
Share

Harry Potter™ Hogwarts™ Battle Defence Against the Dark Arts is a competitive deck-building game for two players, inspired by Harry Potter Hogwarts Battle. In this fast-paced game, players take turns playing cards, taking actions and acquiring new cards to build a more powerful deck as their defensive skills improve. Stun your opponent three times to win! With the noticeable rise in Dark Arts activity, Headmaster Albus Dumbledore has authorized practical Defence Against the Dark Arts lessons to ensure that students are prepared to defend themselves. Under the supervision of Hogwart’s teachers, students will cast Spells and Hexes, use Items, and gain Allies to stun their opponents and protect themselves from evil forces.

Witches and wizards can test their head-to-head abilities in Harry Potter Hogwarts Battle Defence Against the Dark Arts, a competitive deck-building game for two players that is inspired by Harry Potter Hogwarts Battle. In this fast-paced game, players must learn offensive and defensive magic skills to protect themselves and stun their opponent. Players take turns playing cards, taking actions and acquiring new cards to build a more powerful deck as their defensive skills improve. Stun your opponent three times to win!

Deals related to this item

4.7 out of 5 stars
4.7 out of 5
709 global ratings
How are ratings calculated?
To calculate the overall star rating and percentage breakdown by star, we don’t use a simple average. Instead, our system considers things like how recent a review is and if the reviewer bought the item on Amazon. It also analyses reviews to verify trustworthiness.

FG
4.0 out of 5 stars Really fun game! We've played non-stop
Reviewed in Australia on 7 April 2020
Verified Purchase
This game got us through the first 2 weeks of self-isolation. We've recommended it to all our friends isolated in pairs as it's kept us entertained for hours - to the point where we're tweaking the rules to make it last longer. Whilst knowing HP makes it more entertaining, it's possible to play the game without being a HP fan.

The one thing I fault about it though is that the instructions are LIGHT. It's a fairly complex game, and after reading the instructions, we still had so many questions. Watched a couple of youtube videos, and it all fell into place though.
Read more
Helpful
Report abuse
See all reviews

KatieBoo
5.0 out of 5 stars Excellent Fun.
Reviewed in the United Kingdom on 1 October 2019
Verified Purchase
Fabulous game for 2. Based on Hogwarts Battle game and Monster expansion pack except on a smaller scale and not cooperative as a team. You play against partner. Can take from half hour to an hour and half to play. No two games alike which is fun. Good quality product for all Potter fans. Although you could play this with little or no knowledge of the books or films, I imagine you have more fun with quips and sayings linked to them. We certainly do. Highly recommended.
Read more
4 people found this helpful
Report abuse

Cathy
5.0 out of 5 stars Another great Harry Potter game.
Reviewed in the United Kingdom on 21 October 2019
Verified Purchase
Fabulous game for potter heads. My husband and I have played the cooperative HP game and loved it. Now enjoying a bit of competitiveness. Game is made well and to last. We found it easy to pick up the rules.
Read more
2 people found this helpful
Report abuse

inge_lem
5.0 out of 5 stars Fun game!
Reviewed in the United Kingdom on 13 January 2021
Verified Purchase
I would definitely recommend this game if you like Harry Potter and cards. Lots of fun with turn-based duels. This is only for two players.
Read more
Report abuse

Crazey house
3.0 out of 5 stars Game
Reviewed in the United Kingdom on 2 October 2019
Verified Purchase
This was brought for a friend for that that word what’s is coming around quickly (Christmas) so haven’t got a clue what’s it like
Read more
One person found this helpful
Report abuse

Anime Brighton
5.0 out of 5 stars Great game, not too long to play it
Reviewed in the United Kingdom on 14 November 2020
Verified Purchase
Really fun game, short but in depth enough that us adults can fully enjoy it. Would recommend
Read more
Report abuse
See all reviews
Back to top
Get to Know Us
Make Money with Us
Let Us Help You
And don't forget:
© 1996-2021, Amazon.com, Inc. or its affiliates