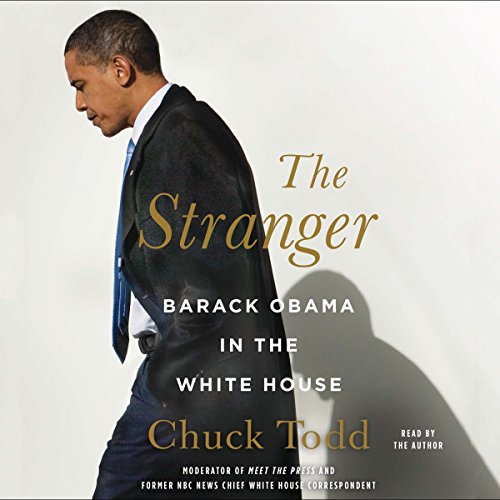 The Stranger: Barack Obama in the White House

Chuck Todd (Author, Narrator), Hachette Audio (Publisher)
4.2 out of 5 stars 74 ratings
See all formats and editions
Sorry, there was a problem loading this page. Try again.

Barack Obama won the presidency in 2008 partly because he was a Washington outsider. But when he got to 1600 Pennsylvania Avenue, that distinction turned out to be double-edged. While he'd been a brilliant campaign politician, working inside the system as president turned out to be much more of a challenge than Obama had ever imagined.

In The Stranger, NBC Chief White House Correspondent Chuck Todd draws upon his unprecedented inner-circle sources to create a gripping account of Obama's tumultuous White House years. In doing so, not only does Todd give us the most revealing portrait yet of this fascinating president and his struggles, but illuminates what "Obamism" really is, what the president stands for, and how his decisions have changed - and will change - American politics for generations.

Read more
©2014 Chuck Todd (P)2014 Harper Audio
Previous page
Next page
Learn more about membership
By completing your purchase, you agree to Audible’s Conditions Of Use and Privacy Notice.
Sold and delivered by Audible, an Amazon company

4.2 out of 5 stars
4.2 out of 5
74 global ratings
How are ratings calculated?
To calculate the overall star rating and percentage breakdown by star, we don’t use a simple average. Instead, our system considers things like how recent a review is and if the reviewer bought the item on Amazon. It also analyses reviews to verify trustworthiness.

Hubert Roy
3.0 out of 5 stars Good, but a little long.
Reviewed in Canada on 11 September 2015
Verified Purchase
A good read, but gets a little long sometimes.
Read more
Report abuse

jamesy
5.0 out of 5 stars Obama opens up to...
Reviewed in the United Kingdom on 4 March 2015
Verified Purchase
Frank and good interview
Read more
Report abuse

Serena
1.0 out of 5 stars Not what I Expected
Reviewed in the United States on 1 November 2019
Verified Purchase
Seller sent me LARGE PRINT book when it was not stated that is what I would get. I absolutely do not want a large print boon as I find it harder to read and it makes the book way too big and thick and takes up too much space and is not what I expected when ordering the book.
Read more
Report abuse