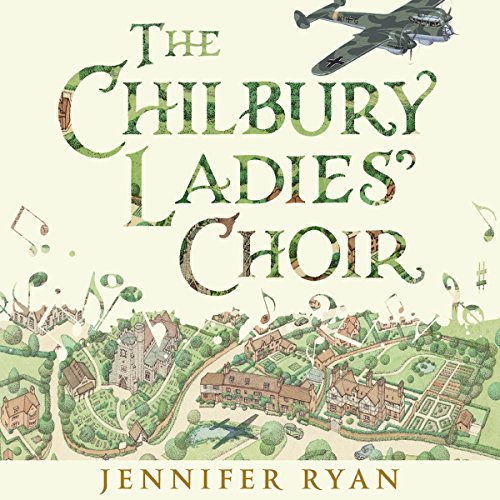 The village of Chilbury in Kent is about to ring in some changes.

This is a delightful novel of wartime gumption and village spirit that will make your heart sing out.

Kent, 1940. The women of Chilbury village have taken umbrage at the Vicar's closure of the choir now that its male singers are at war. But when spirited music professor Primrose Trent arrives, it prompts the creation of an all-female singing group. Resurrecting themselves as The Chilbury Ladies' Choir, the women use their song and unity to embolden the community as the war tears through their lives.

Dependable Mrs Tilling sees the choir as a chance to finally put herself first and a welcome distraction from thoughts of her son fighting on the front line. For Kitty Winthrop, the precocious youngest daughter of Chilbury Manor, singing is the only way to outshine her glamorous sister Venetia, who isn't letting the war ruin her plan to make every bachelor in the county fall in love with her. Meanwhile, when midwife Edwina Paltry is presented with a dastardly job which she's convinced will make her rich, she will have to misuse more than the trust of the choir's women to carry out her scheme - and nothing is going to stop her.

Filled with intrigue, humour and touching warmth, and set against the devastating backdrop of the Second World War, this is a lively and big-hearted novel told through the voices of four very different but equally vibrant characters who will win you over as much with their mischief as with their charm.

Read more
©2017 Jennifer Ryan (P)2017 HarperCollins Publishers
Previous page
Next page
Learn more about membership
By completing your purchase, you agree to Audible’s Conditions Of Use and Privacy Notice.
Sold and delivered by Audible, an Amazon company

4.4 out of 5 stars
4.4 out of 5
2,590 global ratings
How are ratings calculated?
To calculate the overall star rating and percentage breakdown by star, we don’t use a simple average. Instead, our system considers things like how recent a review is and if the reviewer bought the item on Amazon. It also analyses reviews to verify trustworthiness.

Sandy
TOP 500 REVIEWER
5.0 out of 5 stars A marvelous read.
Reviewed in Australia on 7 November 2017
Verified Purchase
An excellent account of life in a village in Kent during World War 2.
Told in a series of letters and journal entries by several of the residents. They share their secrets and fears, and also explain how the Chilbury Ladies' Choir was formed.
I thoroughly enjoyed this.
Read more
Helpful
Report abuse

Babs59
3.0 out of 5 stars A bit busy but ok
Reviewed in Australia on 10 February 2018
Verified Purchase
I started the book with a sense that I wouldn't like it. The characters seemed shallow and the stories took off in all sorts of unrelated directions. However as I became more familiar with the characters I felt some were very interesting and the wartime background was certainly of interest to me. Lots of drama in one small village - a little too much really. Worth reading but I do feel like a lot of big issues were put away in a rush because there was just too much going on!
Read more
Helpful
Report abuse

Charlotte
3.0 out of 5 stars Ladies choir
Reviewed in Australia on 9 October 2017
Verified Purchase
Easy to read, light holiday book. Nice insight into the struggles of women during war time. Like the format of letters or journal entries.
Read more
Helpful
Report abuse

D A Griffin Victor 2
5.0 out of 5 stars A wonderful read
Reviewed in Australia on 14 March 2017
Verified Purchase
My wife chose this and once I started I couldn't stop. I am 72. A man who was born at the end of this time and this writer has made a section of time real to me.
Read more
Helpful
Report abuse

Julie Haigh
TOP 1000 REVIEWER
5.0 out of 5 stars A wonderful, wonderful book.
Reviewed in Australia on 23 February 2017
This is a village saga based in Kent in the time of the Second World War. It’s beautifully presented and reads very quickly and easily right from the start.

Things that drew me to this book were: Firstly, the cover caught my eye. The village tale appealed, and the musical angle too. The character diaries are equally charming and amusing in their turn of phrase and descriptions of the locals.

On top of all this pleasant village setting we soon have intrigue, secrets and lies. I was only 4% into it and I was already imagining it as a TV mini-series, I think it would be great material for that medium.

I loved how this was done: The story is mostly told through the characters’ journals, diaries and letters. Having read Jennifer Ryan’s author bio on Goodreads and that this is her first novel I could hardly believe it as it seems incredibly accomplished right from the early stages.

A cosy village yarn with a bit of scandalous activity. Well-paced with some dramatic scenes in the last stretch. Addictive reading! A wonderful, wonderful book.

I read a pre-publication copy of this book from Netgalley.
Read more
One person found this helpful
Helpful
Report abuse

History and Women
5.0 out of 5 stars Charming
Reviewed in Australia on 19 April 2017
The Chilbury Ladies Choir is a heartwarming novel set in England during World War II. It is an epistolary novel told through letters and journal entries of several women in the town of Chilbury. What is most charming are the unique personalities of the characters - the widow, the busybody, the refugee, and more. With all the men gone to war, they are forced to recreate their choir as "Ladies Only". There are secrets, romances, triumphs, and great sadness too which takes the reader on a continual roller coaster of emotion. I am not surprised that this book has reached national bestseller status. It is sure to please!
Read more
One person found this helpful
Helpful
Report abuse
See all reviews

Athena53
4.0 out of 5 stars A delightful yet semi-serious insight into a time long past
Reviewed in the United Kingdom on 25 March 2021
Verified Purchase
This book is set in the summer of 1940 as the ‘phoney war’ gives way to the Battle of Britain and husbands, sons and lovers are sent away, some never to return. The unique thing about this story is that it is told through a series of diary entries and letters sent by some of the characters.
A newcomer to Chilbury village decides to resurrect the choir which was closed down by the vicar as the men left to fight. This becomes a force for good and the choir actually enters and wins a competition.
The different personalities all have their own troubles and as the story develops and the war progresses we see apparently timid women become strong and bad ones forced to confront their weaknesses. The few men left in the village also go through their own trials and transformations.
The author has done her research thoroughly and has used her own family’s experiences and memories to create the story, but I did feel at times that the language used by some characters was a little modern – eg the ‘good guys’ and saying someone was ‘pregnant’ rather than a euphemism such as ‘expecting’ or ‘in the family way’. I am quite sure both my grandmothers and my mother always skirted round direct reference to this subject.
That said, I thoroughly enjoyed the story. It was probably written before Covid took over our lives, but there are several parallels along the way
Read more
Report abuse

Jilly J
3.0 out of 5 stars Atmospheric and Enjoyable
Reviewed in the United Kingdom on 5 April 2018
Verified Purchase
There were definitely some enjoyable aspects to this book and the story romped along, but I was not keen on the diary/ journal/ letter format in which everyone seemed to over-explain and elaborate until the cows came home! The problem with writing letters or diaries is that the characterisation has to ring true which, when the characters speak and describe detail in such a flowery way, just doesn't work. Letters include huge swathes of dialogue (surely in a letter or diary, you would just summarise a conversation, rather than writing the dialogue line for line, including descriptive detail 'he said, evenly, his fingers toying with his moustache as if it were a battlefield conundrum.') and detailed description of the 'use adjectives and adverbs whenever possible' variety. Had it been written as straightforward narrative, I think I would have enjoyed it much more.
I was also a bit disappointed that the book didn't really bear much of a resemblance to the blurb, and that some very likeable and interesting characters didn't get much of a look-in. However, I still enjoyed it and thought it made a change from many other books on the market.
Read more
6 people found this helpful
Report abuse

Kathleen Spindler
5.0 out of 5 stars A very thought provoking story
Reviewed in the United Kingdom on 23 October 2017
Verified Purchase
As a member of a ladies choir myself I was drawn to the title of this book. I was completely captivated by the story, and the devastating effect the war had on the characters. It was very well written and there were unexpected twists to the story. Makes the reader think what horrors people went through during those times. But the choir came through it all and I can only agree what singing in a choir does for ones well being. Singing lovely songs and making friends as well, and finding books like 'The Chilbury Ladies Choir' Highly recommended.
Read more
10 people found this helpful
Report abuse

CarolB
3.0 out of 5 stars Charming but predictable
Reviewed in the United Kingdom on 25 April 2018
Verified Purchase
This felt almost like a children's book with its cast of somewhat two dimensional characters in an idyllic village. For some time I was confused about Litchfield thinking it was really life Lichfield and I didn't understand why the children aren't at school. I also found the diary/letter format a bit irritating as there was so much repetition of the story. I wanted to hear what Mrs Paltry's sister and Venetia 's friend had to say in response. The writing was lovely but I couldn't quite believe 13 year old Kitty writing like that.
Overall this was a charming holiday read with a happy ending.
Read more
5 people found this helpful
Report abuse

Murrow Mulberry.
4.0 out of 5 stars An appealing title
Reviewed in the United Kingdom on 24 July 2019
Verified Purchase
When i began reading this book i found it a little slow and not a book to grab my attention, however i am pleased that i persevered with it. Given the title it would have been nice to have had a bit more of the storyline centred on the ladies choir as they were not really mentioned a lot. Also i think the book wlud have been more of a whole and flowed easier if it had been written in story format rather than letters, journals and diaries. All in all though it is well worth a read and a good story showing that during war time, and other times too that people can always show their strength of spirit and courage and can work together for the good of everyone.
Read more
Report abuse
See all reviews