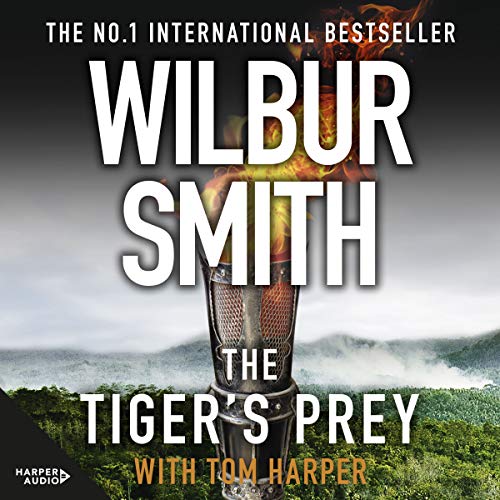 4.2 out of 5 stars
4.2 out of 5
1,970 global ratings
How are ratings calculated?
To calculate the overall star rating and percentage breakdown by star, we don’t use a simple average. Instead, our system considers things like how recent a review is and if the reviewer bought the item on Amazon. It also analyses reviews to verify trustworthiness.

NicShef❤️Reading
TOP 10 REVIEWER
5.0 out of 5 stars Awesome
Reviewed in Australia on 9 September 2018
Verified Purchase
I have been a fan for years however I must say it has been years since I read a Wilbur Smith story which I am pleased I did as they absolutely still contain the can't put down element. It’s exciting, terrifying with huge adventure all rolled into one... it really was hard to out down.

Hal Courtney's son Tom is the central character in ‘The Tiger’s Prey’ with an introduction to more of the Courtney family and other fascinating characters along the way.

The story is set in the 1700s and takes us from the family home in England to Cape Town and on to the Indian Ocean where they are shipwrecked. The story is centre’s around the loss of the Neptune sword and the efforts to retrieve it despite the pirates, robbers the East India Company and many other characters.

Wilbur Smith is an awesome story teller and ‘the Tiger’s Prey’ does not disappoint. It grabs you and doesn’t let go until the end.
Read more
2 people found this helpful
Helpful
Report abuse

Jean Seifert
4.0 out of 5 stars A man is what he makes of himself.
Reviewed in Australia on 18 January 2018
Verified Purchase
This story is centred on India and the dealings between the major trading companies of the time, being the British East India and Dutch East India groups, who ruled the seas. The Dutch control South African trade and the English Indian.
The restless Courtney’s have their usual family disputes keeping things interesting between themselves and their woman, while searching out new adventures. Lots of interesting nautical terms while sailing, piracy, torture and excitement. I admire the female characters in this story for their fortitude in intolerable situations and the way they assist their men to greatness, we girls could learn to be stronger. Great tale of adventure!
Read more
One person found this helpful
Helpful
Report abuse

John
4.0 out of 5 stars Excellent reading!
Reviewed in Australia on 11 October 2017
Verified Purchase
Wilbur Smith has returned by making this novel nearly as good as his first-When the Lion Feeds! The co-writing inthe last two novels; has created a new era of great adventure writing! Obviously some great sequels ahead!
Read more
2 people found this helpful
Helpful
Report abuse

Ozdigger
5.0 out of 5 stars Great read
Reviewed in Australia on 29 December 2020
Verified Purchase
Great read - I hope there will be a follow on featuring young James Courtney. Would be a shame to finish here. Also like to know what new mischief Christopher gets up to.
Eagerly awaiting the follow on
Read more
Helpful
Report abuse

Harry White
5.0 out of 5 stars Courtney fever - The power of the sword.
Reviewed in Australia on 17 November 2017
Verified Purchase
The Courtney family saga continues, to good effect. Continuing story of the Courtney clan. Wilbur has managed to fill in the missing gaps. Well done.
Read more
One person found this helpful
Helpful
Report abuse

Ruan Rhind
5.0 out of 5 stars A true master back at the top where he belongs.
Reviewed in Australia on 20 January 2018
Verified Purchase
What a feeling when your favourite writer amazes you again. A true Courtney and a victory for the authors. A must read for Wilbur fans. I will wait impatiently and full of hope for another story in this beautiful family saga. The characters are rich and the story gripping. What a page turner, I did not want it to end.
Read more
Helpful
Report abuse

Timothy J Marsden
4.0 out of 5 stars Good read
Reviewed in Australia on 4 April 2019
Verified Purchase
I really enjoyed this book. Action packed. Maybe a bit over the top, as the bullets and shells keep missing , but I suppose you can’t kill the hero!
Read more
Helpful
Report abuse

Kindle Customer
4.0 out of 5 stars Goodread
Reviewed in Australia on 26 February 2020
Verified Purchase
I was glad when it finally finished. On and on, not much more could happen. Not really my type of book.
Read more
Helpful
Report abuse
See all reviews

Mr. D. L. Rees
4.0 out of 5 stars ADRENALIN-FUELLED EXPLOITS AMID MUCH VILLAINY
Reviewed in the United Kingdom on 13 June 2021
Verified Purchase
1710. The East India Company is determined to monopolise trade by hook or by crook. Independent merchants also face problems from pirates, no mercy expected when they attack. Tom Courtney sails to rescue a ship being overwhelmed. Cue for a dramatic start to adventures full of excitement and a very high death toll.

Welcome here the latest in the Courtney saga, it truly a family at war. A history of feuds, scores yet to be settled. Focus here is on two of the younger generation: Tom's nephew Francis, Francis' cousin Christopher. They have yet to meet, forces to reckon with when they do - in their different ways both having evolved into veritable fighting machines.

All here are rather reminiscent of stirring old-fashioned tales set in exotic places. Tom himself seems almost a super-hero, destined for many in-the-nick-of-time escapes. The villains are villains indeed. (Beware the Rani, stunningly beautiful, but not to be trusted.)

This being my first Wilbur Smith read, I cannot say how it compares with his others. Whilst enjoying the spirited action, I felt the explicit sex scenes somehow did not really belong and there seemed too much relish in describing graphic battle injuries, not to mention tortures inflicted upon captives. Also reducing the overall impact were rather creakingly contrived escapes of prominent characters to ensure a sequel.

Such reservations aside, this proved an enjoyable, involving read.
Read more
One person found this helpful
Report abuse

Terry A.
5.0 out of 5 stars An excellent read.
Reviewed in the United Kingdom on 24 January 2021
Verified Purchase
I swear you cannot and will not find as great an author as Wilbur Smith.
The thrill and excitement Wilbur generates with his stories of Africa, and the travels across the seas to other Countries, the adventures the players receive, takes you with them to experience the trials and tribulations and love and heartache, war and peace, that they endure.
I have read all but the latest book of Mr Wilbur Smith, and have enjoyed every one of them.
I will finish by saying. Hand on heart, if you love adventures, you WILL enjoy this book.
Highly recommended.
Read more
Report abuse

Charles Ensor
5.0 out of 5 stars Wilbur at his compelling best!
Reviewed in the United Kingdom on 23 September 2017
Verified Purchase
Wilbur Smith at his best - I read the book in two sittings over 24hours and once I had finished - I felt a real loss and had to immediately find another book to fill the gap! Un-put-down-able! Great story compelling read
Read more
9 people found this helpful
Report abuse

Dont_50
5.0 out of 5 stars Great but gruesome
Reviewed in the United Kingdom on 5 October 2017
Verified Purchase
I have read every book Wilbur Smith has written and they are all great. This is no exception and is a great story but I found it a fraction gruesome for me. I love a good story but really think great books can be written with out the gory details of fights. But that will not stop me reading any more that he writes.
Read more
6 people found this helpful
Report abuse

A. Mcnae
5.0 out of 5 stars Wilbur Smith never lets you down
Reviewed in the United Kingdom on 21 September 2017
Verified Purchase
Excellent read as usual the author never lets you down .All fans of this author should read this book would highly recommend this book
Read more
4 people found this helpful
Report abuse
See all reviews
Back to top
Get to Know Us
Make Money with Us
Let Us Help You
And don't forget:
© 1996-2021, Amazon.com, Inc. or its affiliates