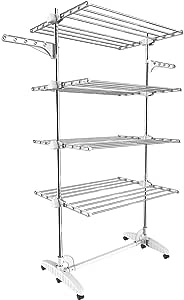 Are you tired of hanging wet clothes everywhere and having them take a long time to dry? Optimize your space and properly dry your clothes by using a well-designed drying rack. Dry clothing remains hygienic with a fresh scent and can also lighten the chore of ironing. Effective inside and outside, this fashion drying rack will give you the space you need to spread out all your clothes. It is available with a central stem to extend your sheets on and also includes door hangers for your jackets and shirts. Easily adjustable, it can be set up to accommodate linens such as bed sheets or duvets. This clothes drying rack is made of rust-resistant stainless steel. It can fold down and be stored in a corner after use without cluttering your room.

Even carrying a full load of laundry, the the thick stainless steel tubing keeps the product stable, and safe to use. Hang lots of clothes and dry them quickly on the hanging rails and two-piece hoooks

4.4 out of 5 stars
4.4 out of 5
2,407 global ratings
How are ratings calculated?
To calculate the overall star rating and percentage breakdown by star, we don’t use a simple average. Instead, our system considers things like how recent a review is and if the reviewer bought the item on Amazon. It also analyses reviews to verify trustworthiness.

June
4.0 out of 5 stars Don't rely on the supplied hardware
Reviewed in Australia on 4 February 2021
Colour: WhiteVerified Purchase
This is a good item, but assembling it can be frustrating. There should be a list of tools required to assemble it, because I doubt everyone would have miniature pliers readily to hand.
The bolts supplied are all too small. The bolts for the base did not go through even one material thickness, let alone the clamp comprised of two material thicknesses. I had to rummage around in my own supply to find a size that would hold the base together and not cause the whole thing to collapse. I used the supplied bolts to attach the rails, but it required holding the nut in place with a set of miniature pliers and using a screwdriver from the other side, because there was so little length to work with.
The metal posts to which the rails are attached do not slot in well, and have come apart each time I have held them to move the rack. I would have preferred them to be of the "click and twist" type, because friction alone does not secure them. This has required taping the joints.
Once assembled and adjusted as described, the rack works OK.
Read more
Helpful
Report abuse

Mrs Allen
TOP 500 REVIEWER
5.0 out of 5 stars Very very good
Reviewed in Australia on 7 February 2021
Colour: WhiteVerified Purchase
After a couple of hiccups (hubby and I are not assemble savvy) we have a brilliant clothes rack. It can hold a full washing load, and folds down to a slim line to be tucked away until next time
Read more
Helpful
Report abuse

Surbhi
1.0 out of 5 stars It's not worth the money.
Reviewed in Australia on 2 October 2020
Colour: WhiteVerified Purchase
Horrible product. Screws just don't fit. Very flimsy and cheaply made. Please don't spend $100 on this. Assembly is a pain. Regret this purchase.
Read more
2 people found this helpful
Helpful
Report abuse

Philippe Cordier
2.0 out of 5 stars Not as impressive as it looks on the photos
Reviewed in Australia on 23 January 2021
Colour: WhiteVerified Purchase
It looks a lot better on the photos....
While instruction are clear, i am not confident how long all the bolts will last....
Read more
Helpful
Report abuse

JAGBIR
2.0 out of 5 stars It comes off from the middle.
Reviewed in Australia on 5 March 2021
Colour: BlackVerified Purchase
Its Big and spacey. sturdy
but comes off the middle when picking and moving it. i had to buy clamps.
Read more
Helpful
Report abuse

Philip
3.0 out of 5 stars Difficult to assemble.
Reviewed in Australia on 30 December 2020
Colour: WhiteVerified Purchase
First the bad:
Product arrives in large box in pieces. Self assembly. Bolts and screws labelled incorrectly. You’ll find out half way through assembly and have to start again. No spanner included for tiny bolts. Tricky to assemble if you have medium/large hands as screws/bolts are tiny. In my case, took two people 30 mins to assemble.
The good:
Reasonably sturdy. Excellent fold away design. Holds heavy towels.
Summary:
I would recommend buying an alternative pre-assembled product to avoid the issues above. However, the product is good when assembled (if you get that far).
Read more
Helpful
Report abuse

Karen
5.0 out of 5 stars Am I allowed to get excited about a clothes airer?!
Reviewed in the United Kingdom on 2 August 2017
Colour: WhiteVerified Purchase
Love this clothes airer, it's sturdy, folds flat (inc legs) and holds two large washes +. The folding arms allow for different types of washing - it can even accommodate large towels with just the top arms folded out and the rest flat. Hang multiple dresses/shirts from hangers off the two wings at the top. It's also on wheels so can be moved very easily. It is tall but I see this as a bonus. My friends have gone and bought ones too! I don't usually give 5 stars but this is worth it (and I get nothing for leaving this review apart from maybe knowing I have helped someone make a right choice :)).
Read more
22 people found this helpful
Report abuse

Sarah
4.0 out of 5 stars Does What It's Supposed To Do
Reviewed in the United Kingdom on 7 May 2017
Colour: WhiteVerified Purchase
This took a feisty old lady (me) around an hour to put together. It was straightforward, and the instructions were OK, but it was fiddly, especially as the screws seemed to barely reach through the structure to enable the bolts to be put on the other end. The structure and screws and bolts amounted to 70 odd pieces. I ended up using two socket and bit sets, screwdriver one side and socket the other, but they still didn’t seem to tighten enough, but perhaps this is how it’s supposed to be.

The structure itself, once completed, seems OK and sturdy-ish. The rack sections, once put together, just slide onto the structure itself from the top and are tightened by turning the outer handles. One of mine keeps slipping down and won’t tighten further, so I’m going to move that one to the bottom. The racks can be folded in quite simply, by pulling gently outwards and folding down, and it moves easily on its castors. After I'd moved it the first time I noticed one of the legs with the castor attached had folded inwards, and I'm guessing that this is so when not in use these fold inwards for easier storage.

I had to buy something to replace my dreadful Minky Tower Airer, which due to shoddy materials turned out to be a complete disaster, and this is much better. It’s pretty big once up, with a footprint of about 84 x 54 cm, and perhaps a downside is that the rails of the racks are too big to take normal size pegs - I use Beldray soft grip and they just about fit, but I think they’d mark any clothing fastened this way. It’s OK though, and is doing its job.