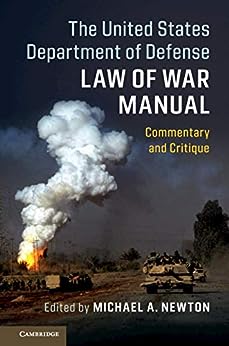 by Michael A. Newton (Editor) Format: Kindle Edition
See all formats and editions
Sorry, there was a problem loading this page. Try again.
The United States Department of Defense Law of War Manual: Commentary and Critique provides an irreplaceable resource for any politician, international expert, or military practitioner who wishes to understand the approach taken by the American military in the complex range of modern conflicts. Readers will understand the strengths and weaknesses of US legal and policy pronouncements and the reasons behind the modern American way of war, whether US forces deploy alone or in coalitions. This book provides unprecedented and precise analysis of the US approach to the most pressing problems in modern wars, including controversies surrounding use of human shields, fighting in urban areas, the use of cyberwar and modern weaponry, expanding understanding of human rights, and the rise of ISIS. This group of authors, including academics and military practitioners, provides a wealth of expertise that demystifies overlapping threads of law and policy amidst the world's seemingly intractable conflicts.
Read more
Previous page
Next page
Kindle e-Readers
Kindle Fire Tablets
Free Kindle Reading Apps
See all supported devices

New from the author of The Girl from Munich
From Australia’s bestselling author comes the story of one woman’s determination to find her place in a world that men are threatening to tear apart. Shop now.

Provides detailed assessments of law applicable to the most difficult problems encountered during modern armed conflicts and coalitions. --This text refers to the hardcover edition.

'The United States Department of Defense Law of War Manual: Commentary and Critique is essential reading for students, scholars and practitioners alike, whether they view themselves as on the left or the right, and whether they consider themselves supporters or critics of US military law and policy. Deftly compiled and introduced by editor Michael A. Newton, the essays in this book, all by top international and military law scholars, collectively form an essential companion to the Law of War Manual itself, highlighting both the Manual's strengths and the inevitable gaps, flaws and ambiguities that remain in any undertaking of this scale.' Rosa Brooks, Georgetown University Law Center and the Modern War Institute, West Point

'This book provides thorough analysis no reader of the US Department of Defense Law of War Manual should miss. Michael A. Newton and his contributors have developed an indispensable tool not only for academic research, but also for international military cooperation in an environment of ever increasing complexity. Department of Defense decision-makers should find the strength to consider some of the critical approaches taken here and use this as a further incentive for starting an open exchange with Allies and Partner States on the issue.' Dieter Fleck, Former Director of International Agreements and Policy, German Ministry of Defence, Member of the Advisory Board, Amsterdam Center of International Law, Honorary President, International Society for Military Law and the Law of War

'The Department of Defense Law of War Manual is a complex undertaking appropriate to the complexities of modern warfare. This book is a most impressive compilation of perspectives from experts who care deeply about the integrity of the law and its application. It explains the importance of the US perspectives on modern warfighting, and provides a wealth of historical and legal reference material to contextualize recent US practice. This book provides invaluable assistance to anyone who seeks to truly understand the role of the US military in serving the interests of a democratic Republic.' John Norton Moore, Director, Center for National Security Law and Walter L. Brown Professor of Law, University of Virginia School of Law, Former Chairman of the Board, United States Institute of Peace

'The law of war matters. The inability of the international community to develop new treaty law has prompted the promulgation of manuals designed to assist State armed forces navigate the ever-changing operational law environment. Commanders and their legal advisers around the world will benefit from the commentary in this superb book, which provides an array of critiques of the recent United States Law of War Manual that will greatly benefit any practitioner or policy-maker who seeks to understand the current state of the law of war from the perspective of the US military.' Ken Watkin QC, former Judge Advocate General for the Canadian Forces --This text refers to the hardcover edition.

The Department of Defense Manual provides a consolidated compendium of the American approach to modern warfighting. This book dissects the 1193 pages and 7029 footnotes in a manner that permits readers and military practitioners to understand precisely the strengths and weaknesses of the US legal and policy pronouncements. --This text refers to the hardcover edition.

Mike Newton is a West Point graduate who serves as Professor of the Practice of Law at Vanderbilt University, Tennessee, Law School. He has published over ninety articles, editorials, and book chapters including co-authored books Proportionality in International Law (2014), and Enemy of the State: The Trial and Execution of Saddam Hussein (2008), which received the Book of the Year Award from the International Association of Penal Law. Newton helped negotiate the International Criminal Court Elements of Crimes and served in the US Department of State during the Clinton and Bush Administrations. --This text refers to the hardcover edition.
Read more

5.0 out of 5 stars
5 out of 5
4 global ratings
How are ratings calculated?
To calculate the overall star rating and percentage breakdown by star, we don’t use a simple average. Instead, our system considers things like how recent a review is and if the reviewer bought the item on Amazon. It also analyses reviews to verify trustworthiness.

Ethan
5.0 out of 5 stars Succinct and Masterful Analysis
Reviewed in the United States on 4 April 2019
Verified Purchase
This book is a must have for any national security law practitioner or policy maker. A perfect supplement to the DOD Law of War Manual. It addresses not just the 'what' behind the relevant legal principles, but also the 'why,' providing a much needed contextual understanding that this area of law so requires.
Read more
2 people found this helpful
Report abuse

Victor Noriega
5.0 out of 5 stars Great compilation of scholarly and expert views on the U.S. DoD Law of War Manual.
Reviewed in the United States on 7 May 2020
Verified Purchase
Simple to navigate compilation of expert and scholarly views on the recently drafted U.S. DoD Law of War Manual. The contributions in the book give a good mix of views on the Manual and it where it can be improved.
Read more
Report abuse
See all reviews
Back to top
Get to Know Us
Make Money with Us
Let Us Help You
And don't forget:
© 1996-2021, Amazon.com, Inc. or its affiliates