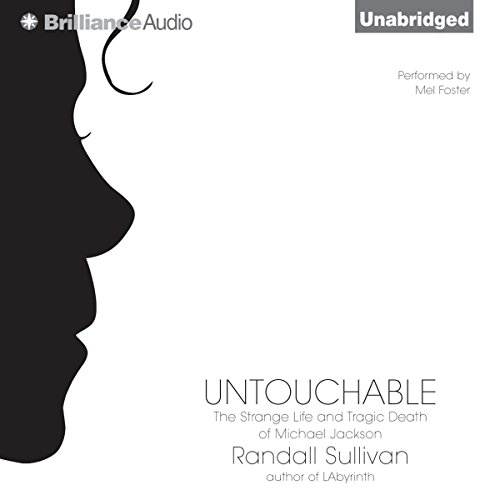 Untouchable: The Strange Life and Tragic Death of Michael Jackson

Beginning with his final departure from Neverland, Untouchable takes listeners through Jackson's final four years, as he shuttled from California to the Middle East, Ireland, Asia, the East Coast, and Las Vegas, planning to recapture his wealth and reputation with a comeback album and a series of 50 mega-concerts, for which he was rehearsing until the day before his death. Sullivan also delves deep into Jackson's past, and the man that emerges is both naive and deeply cunning, a devoted father whose parenting decisions created an international outcry, a shrewd businessman whose successes blew up in his face and whose failures nearly brought down a megacorporation, and an inveterate narcissist who wanted more than anything a quiet, solitary, normal life.

Sullivan has never-before-reported information about Jackson's business dealings and the pedophilia allegations that irreparably marked his reputation. He had exclusive access to inner-circle figures, including Jackson's former attorney and business manager. The result is a remarkable portrait of Michael Jackson, a man of uncountable contradictions who continues to reign as the King of Pop.

Read more
©2012 Randall Sullivan (P)2012 Brilliance Audio, Inc.
Previous page
Next page
Learn more about membership
By completing your purchase, you agree to Audible’s Conditions Of Use and Privacy Notice.
Sold and delivered by Audible, an Amazon company

4.1 out of 5 stars
4.1 out of 5
190 global ratings
How are ratings calculated?
To calculate the overall star rating and percentage breakdown by star, we don’t use a simple average. Instead, our system considers things like how recent a review is and if the reviewer bought the item on Amazon. It also analyses reviews to verify trustworthiness.

There are 0 reviews and 2 ratings from Australia

katherine
5.0 out of 5 stars Large book which seems well researched and balanced.
Reviewed in the United Kingdom on 11 January 2017
Verified Purchase
I have read several MJ related books. This large book would be the best review I have read . It seems well researched and appears to be a balanced account. It addresses MJ's complex financial situation in life and in death. It reveals that MJ's family situation which is complicated by family members keen to cash in on MJ's wealth and talent. Repeated firing of staff is evident all the way through MJ's life, as are the myriad of legal battles that MJ endured (mostly financial). Although MJ did have friends, young and old, many were willing to sell stories about him which left him with a sense of betrayal. Well worth reading.
Read more
5 people found this helpful
Report abuse

Owb
5.0 out of 5 stars well written and interesting..
Reviewed in the United Kingdom on 8 August 2015
Verified Purchase
Untouchable :the strange life of micheal jackson is unlike any micheal jackson book i have read and i have read about half a dozen in my time ,included Moonwalk and other from the 1980s ,what set this book apart from the books i have read is this book focuses on the last years of micheal life 2003 to 2009.
Untouchable was very interesting read and i could not put it down because it contained new info about the late superstar that interested me .including jackson`s many money worries fight over his music catalogue.
Untouchable is so far the best Jackson book i have read and i was very pleased with the new info about the late great superstar that micheal jackson ..5 out 5
Read more
4 people found this helpful
Report abuse

V
4.0 out of 5 stars living like a hunted animal
Reviewed in the United Kingdom on 16 May 2015
Verified Purchase
This is an extraordinary book that gives a balanced, in-depth and extremely harrowing account of the last years of Michael Jackson's life and the aftermath of his death. It is a troubling insight into a world of backstabbing advisers, attorneys and family members, with Michael constantly on the move, living like a hunted animal. No-one has more successfully documented the toxic atmosphere that surrounded Jackson, mainly created by the opposing factions all pulling him in different directions, greedy for money or reflected glory. On the rare occasions that someone good and honest appears on the scene they are soon swept away by those with less than honourable intentions. I found much of the book upsetting, especially the description of his death and the days leading up to it. There are lighter moments though; particularly touching are the descriptions of Michael's life with his children during his time spent in Ireland, where he seems to have been actually valued and treated as a human-being by those around him and had a chance to live a relatively 'normal' life.
Sullivan is not trashing Jackson's reputation, he is sympathetic to him and states that he believes in his innocence. I don't believe anyone would think any less of MJ after reading this, far from it - he climbed even higher in my estimation.
That said, there are inaccuracies which are inexcusable, e.g. claiming Michael wore a prosthetic nose (a look at the autopsy report shows this is not the case), and Gordon Brown being described as the 'prime minister of the Liberal party'. Also, his conclusion that Michael remained a virgin his entire life will anger some fans.
Read more
3 people found this helpful
Report abuse