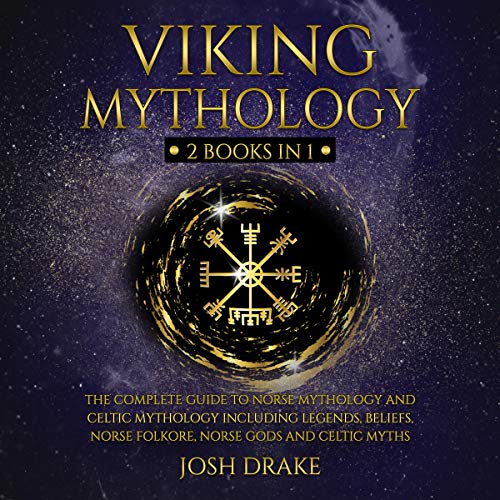 Josh Drake (Author, Publisher), Kevin Ford (Narrator)
3.7 out of 5 stars 13 ratings
See all formats and editions
Sorry, there was a problem loading this page. Try again.

Have you ever wondered about the legendary Vikings that have been documented and portrayed across different channels of media? Do you know what history says about them and who they were, really?

The mysterious and widely misunderstood Vikings have been explained clearly and completely in this audiobook. For the lovers of ancient mythology, the audiobook brings valuable insights into Norse and Celtic mythology - what they said about the Vikings, their culture, their polytheistic religion, and much more.

In contrast to the common misconception about the Vikings that they were ruthless agnostics and brutes and not much more than that, the audiobook provides valuable insight into the polytheistic religion of the Vikings and gives an in-depth knowledge about their culture - whether they had a culture at all and whether they were the brutes that most accounts of their existence and activities say they were.

A mesmerizing tale revolving around the mysterious and profound Norse folklore and the beguiling lifestyle of the legendary Vikings.

This audiobook has connected all the pieces of the puzzle and presents a unique tapestry interwoven with multiple threads from the different sides of Norse mythology that contains all the answers about the legendary Vikings and their beliefs. To make a long story short, this audiobook holds in it a beguiling and thrilling tale of the beliefs of an enchanting and historic population written in a piquing manner.

Read more
©2020 Josh Drake (P)2020 Josh Drake
Previous page
Next page
Learn more about membership
By completing your purchase, you agree to Audible’s Conditions Of Use and Privacy Notice.
Sold and delivered by Audible, an Amazon company

3.7 out of 5 stars
3.7 out of 5
13 global ratings
How are ratings calculated?
To calculate the overall star rating and percentage breakdown by star, we don’t use a simple average. Instead, our system considers things like how recent a review is and if the reviewer bought the item on Amazon. It also analyses reviews to verify trustworthiness.

jessi jones
1.0 out of 5 stars Bad translation?
Reviewed in the United Kingdom on 3 July 2021
Verified Purchase
My deepest aplologies to author Josh Drake - im sure many hours of time and research went into this book.
I sent back my copy after attempting to read the first few pages. I dont know if thisbis a bad translation, or just very poorly written, but it was impossible to read.
Read more

jessi jones
1.0 out of 5 stars Bad translation?
Reviewed in the United Kingdom on 3 July 2021
My deepest aplologies to author Josh Drake - im sure many hours of time and research went into this book.
I sent back my copy after attempting to read the first few pages. I dont know if thisbis a bad translation, or just very poorly written, but it was impossible to read.

charles s. carroll
1.0 out of 5 stars Don't buy this book.
Reviewed in the United States on 15 March 2021
Verified Purchase
I am not someone who normally writes reviews of books. Some books are good, some are great, some can be life changing. This is perhaps the worst written book I have ever read. At first I thought it might be a joke or a very bad translation. I am not going to deny the research behind the book but Mr. Drake"s awkwardness with the English language is extraordinary. Viking, i.e., Germanic Folklore is fascinating but there must be better portals into this world than this book.
Read more
Report abuse
See all reviews