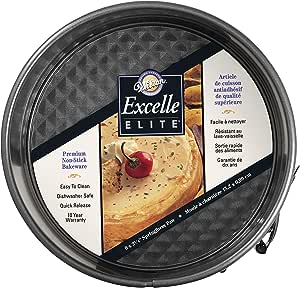 Brand: Wilton
3.4 out of 5 stars 3 ratings
Secure transaction
Returns Policy
Amazon-managed Delivery
Your transaction is secure
We work hard to protect your security and privacy. Our payment security system encrypts your information during transmission. We don’t share your credit card details with third-party sellers, and we don’t sell your information to others. Learn more
Amazon-managed Delivery
Amazon manages delivery by using preferred couriers/agents. Order delivery tracking to your doorstep is available

Making a melt-in-your mouth cheesecake is a given with this springform pan. With a non-stick coating, there's never any crust left behind. Wilton’s Excelle Elite's Springform Pan measures 6.3 x 6.3 x 2.9 inches, a great size for your next cheesecake. No matter what you're making, the non-stick coating allows your food to slide or pop out easily, making cleanup almost effortless. Non-stick bakeware is a must-have for busy cooks. Wilton helps families celebrate! We inspire the joy of creativity in everyone, everywhere, every day. Since 1929, Wilton has been helping home bakers and cake decorators all over the world create sweet treats and beautiful desserts by giving them the tools to make it fun and easy. The Wilton name is known around the world for cake decorating, candy making, bakeware and party products. At Wilton, we're passionate about bringing the love of baking and decorating to every consumer.

Bakeware for Every Day and Every Occasion

Whether you love to bake once a week or once a month, Wilton has the bakeware to help you make the most out of your favorite foods. From heavy-duty aluminum cake pans to durable, non-stick all-purpose cookie sheets, there's something for everyone. Replace your old bakeware or build on your current collection with an assortment of standard, shaped and silicone pans.

Wilton bakeware comes in a wide variety of different shapes and sizes, including round, square and oblong pans, small, medium and large cookie sheets, standard and mini muffin tins ranging from 6-cup to 48-cup, and all kinds of shaped pans like hearts, animals and popular children's characters.

Our silicone baking pans and molds also come in an array of fun shapes so you can make treats to fit different occasions and party themes. So go ahead, get your bake on with Wilton and make the kitchen your happy place.

3.4 out of 5 stars
3.4 out of 5
3 global ratings
How are ratings calculated?
To calculate the overall star rating and percentage breakdown by star, we don’t use a simple average. Instead, our system considers things like how recent a review is and if the reviewer bought the item on Amazon. It also analyses reviews to verify trustworthiness.

jillb
1.0 out of 5 stars Fits the Instant Pot Mini BUT all rust now!
Reviewed in the United States on 27 January 2018
Verified Purchase
It wasn't clear if this would fit in the Instant Pot Mini but I took a chance. Perfect choice. The quality is good. Our recipe called for using a parchment lining so I can't speak to any leaking concerns, especially since my mouth is full of good cheesecake! UPDATE: Seven months later this pan has completely rusted into a pile of junk....I'm sure it still fits in the Instant Pot but I can't use it!
Read more
90 people found this helpful
Report abuse

Skyhawk
4.0 out of 5 stars Works well
Reviewed in the United States on 29 November 2015
Verified Purchase
I have always used springform pans to make cheesecakes with crusts, where leakage was never an issue. I ordered this pan to make the layer cakes and crustless cheesecakes from Clean Eating with a Dirty Mind, by Vanessa Barajas (an absolute treasure for a person with gluten sensitivity), so it was essential that it not leak the batter. According to the reviews, some people have had problems with this pan leaking. Therefore, I held my breath when I ordered it, hoping to get one that did not leak. When it arrived, I tested it with water, which poured right out. I then tried parchment paper, waxed paper and foil separately and in combinations, inside under the ring, inside over the ring, outside, outside and inside, one, two three layers, etc. The water poured out. So I was going to return the pan. But then I learned more about springforms. They were never intended to be waterproof, but most will hold a thick batter. When I tested again with a flour slurry about the thickness of cake batter, voila! no leakage. (For use in a bain marie, place the pan inside a larger cake pan to prevent water from seeping in.)

I did indeed use the pan to make a cake. I put a single layer of parchment on the bottom under the ring. I used an 8" parchment circle, which left a rim of paper I used after the cake had cooled to easily lift it off the base. The pan worked very well and the cake was easily released from the rim. I am now ordering a second, so I don't have to make the batter twice to produce a layer cake.

The reason I have deducted a star is that a layer of crumbs was packed into the base of the rim, which is an open ring. Getting the crumbs cleaned out was difficult and involved toothpicks and the folded edge of a dishtowel. If anyone reading this has a trick for cleaning the pan, please leave a comment.

I believe people have mentioned rust as an issue. This type of pan does commonly rust. For that reason, I do not soak it until about 15 minutes before I will clean it, I dry it thoroughly, and I leave the dried rim and base in a warm (150 degrees) oven for 10 to 15 minutes to ensure that it is as dry as possible.
Read more
72 people found this helpful
Report abuse

Tsack2006
2.0 out of 5 stars Material is good, but some leakage from bottom
Reviewed in the United States on 31 October 2018
Verified Purchase
I was looking for a spring release cake pan - read a whole bunch of reviews before settling on this. This wasn’t the cheapest available, but my reviews and the picture posted looked to be sturdy and possibly good seal.

I got it on time and quickly - so delivery wise it was good. Tried it out with water and the thing leaked like no tomorrow. Then again I thought - we are not trying to bake water so let’s be realistic and fair.

I used it to bake a banana bread mixture. It’s not the most watery of batter and yet there were still leakage. I needed to put a cookie sheet below the pan. It did stopped once the batter started cooking and forming.

The release worked fine, and I had parchment paper lined the bottom so no issue releasing from the bottom. However washing was a pain - the batter got into the grooves around the ring of the pan bottom and also into the groove of the ring itself.

So a little disappointed over all. Maybe it is good for making something like no bake cheesecake only.
Read more
8 people found this helpful
Report abuse
See all reviews
Back to top
Get to Know Us
Make Money with Us
Let Us Help You
And don't forget:
© 1996-2021, Amazon.com, Inc. or its affiliates